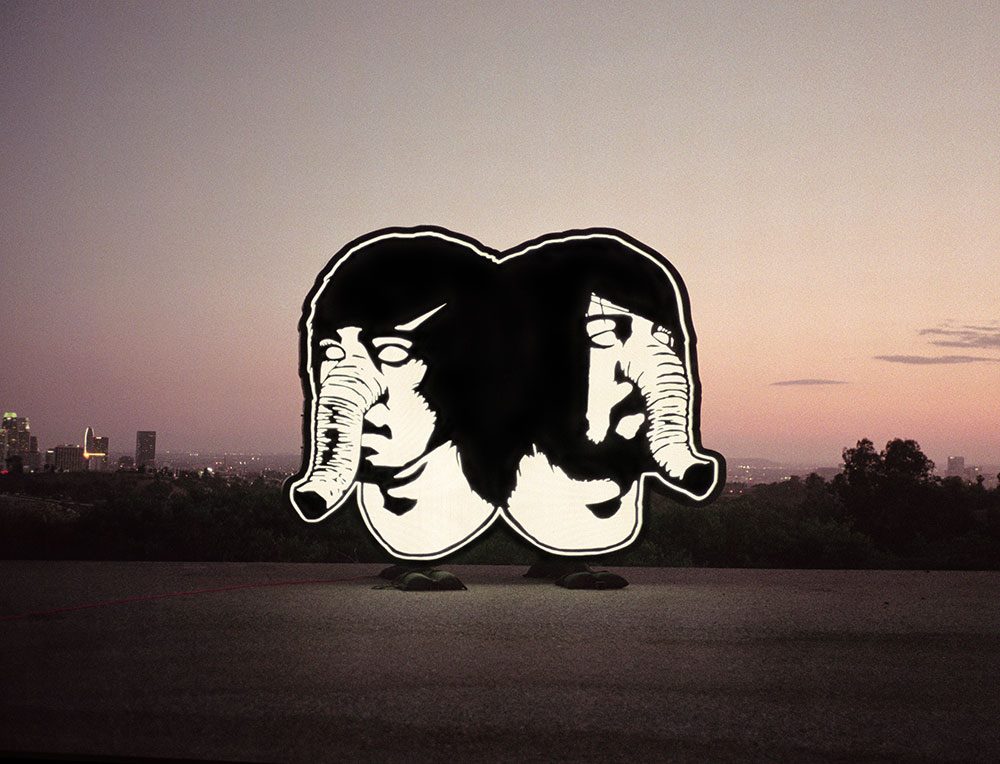 Death From Above 1979 – The Physical World – Album Review

Scratching my eyes here…is this correct? Lil’ ol SBS has the honor of doing the review on the gigantic-sounds of this massively popular Canadian duo, Death From Above 1979? I’ve mentioned I love it here right? This…is incredible; and though I’ll admit I’ve been somewhat late to the party on the music of this Toronto-based band, I’ll also admit that now that I’m here I’m taking the couch to crash. For the year.

This music has all the rhythm and rock you could possibly want, produced immaculately. Crunchy & melodic and just EXPLOSIVE in every right way – this isn’t me blowing smoke; this is them literally setting the house on fire. From the drop, track one from The Physical World, “Cheap Talk” comes ripping out of the albums sonic-skin and just buries itself DEEP inside your head. As far as danceable-rock is concerned – this track could make Stephen Hawking himself get up and bust the robot.

The energy-festival continues on through the frantically-intense “Right On, Frankenstein!” with the vocals on full attack to match the vibrant beat and thrashing pulse of the music. In three minutes time, Death From Above 1979 shows the range, dynamics and creativity they’re still capable of in this atom-bomb of a comeback album after being away for ten years. The switch at the end of this second cut though is just pure sonic-brilliance…so short…so sweet…so…

“Virgins” is confident, funked-right-out and again, just a completely brilliant switch towards the end. The vocals are just perfect in this track…the drums, timing…it’s all here – this track is HUGE. You can’t help but just take a moment and truly marvel at just how massive the sound that these two musical-masterminds make can be. Have a listen to “Crystal Ball” – even if your volume was OFF you’d STILL hear it!

As burningly-fast as The Physical World rips by, the real magic in the music of Death From Above 1979 is just how tight, concise and no-bullshit this melodically-intense overdriven-funk/rock is; and though it’s extremely noisy in all the right ways, the beauty of the music really lies in their timing and crystal-clarity. I’m skipping around here, but “Gemini…” I mean, C’MON – I’m not alone here right? This track ROCKS.

But yeah…too far ahead right now…especially when the middle of this album is so incredibly strong. Songs like “White Is Red” and “Trainwreck 1979” showcase the real depth in songwriting contained within this dynamic band. For my money…”Trainwreck 1979” would be right up there with the best of this album full of incredible tracks; the vibrant emotion and innovatively-bouncy rock they’ve come up with this track is maddeningly catchy. Once again pulling out their ace in the hole within the final minute though – Death From Above 1979 unleashes yet another killer switch up to a phenomenal part, overflowing with outpouring emotion and true conviction through both the music and vocals.

Good lord! “Government Trash!” Just fuckin WOW. Put these two down on my ‘absolutely MUST-see-live’ list; the energy hasn’t dropped below the pulse of a cranked-up jackrabbit the entire album through. And this track LEADS into “Gemini,” which I’ve already mentioned. These two tracks, back-to-back could be used medicinally to bring around the comatose. Can all of this music be pulled off one after the other after the other live? I’ve gotta see it to believe it – these two individuals have the energy of two full bands – and by ‘full bands’ I mean like, you know…bands the size of The Polyphonic Spree.

For the final cut and title-track, “The Physical World” is a somewhat-more emotionally translatable track than the rest. It could very well be the fact that it’s probably the slowest tune on the album by about a half-step from the rest, which is to say barely if at all… But the tones and textures and commitment in this song are audibly tangible; you can hear within this very track that Death From Above 1979 came back because there was clearly still something to be said, something to be created, something yet to be heard…a message undelivered…

They were left a project unfinished; this vibrantly, extraordinarily-dynamic display of wall-to-wall energy throughout The Physical World makes me want to stand up and cheer right here in the studio. If you’re going to make a comeback after a decade – this is the musical blueprint on how to do it RIGHT. And though I hope it doesn’t take another ten years to get the next album…after listening to this one I’d happily wait another ten if it truly meant I’d get more music from these guys. Sonic perfection.

Tags: Album Death From Above 1979 sleepingbagstudios The Physical World