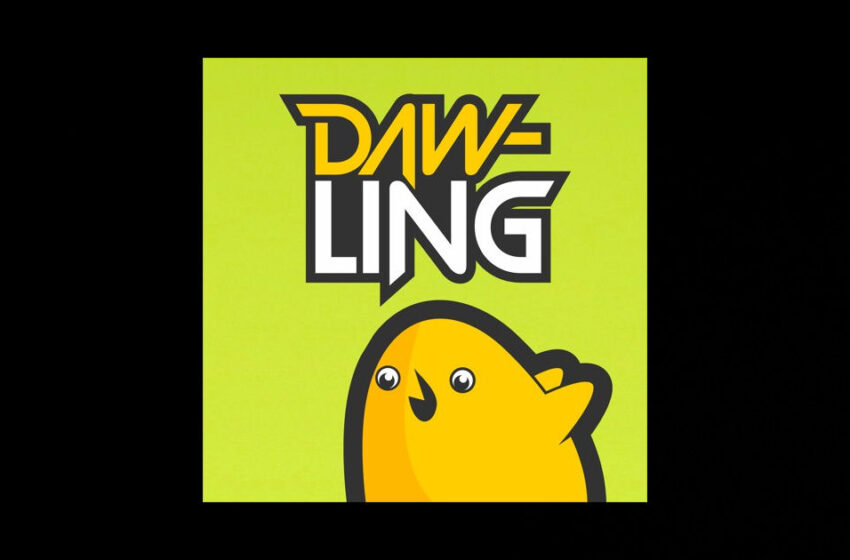 THIS is the way to get an EP started on ALL the right notes – “Love And Dancing” is as enticing as a gateway tune can be, and just about one of the best title-tracks you’re ever gonna be lucky enough to hear.  Daw-ling, y’all can JAM, and you’ve certainly got my attention as instantly as I’ve ever given it!  They don’t even give ya a full ten-count before lift-off, you feel me?  “Love And Dancing” comes out swinging for the fence with single-worthy vibes – from the spectacular beat, to the purely radiant vocals, Daw-ling’s first impression comes BEAMING outta your speakers and demands you turn it UP as loud as your stereo-system will take ya.  Kind of similar to Poe, if you remember her from the mid-late 90s…and if you’re anything like me, as in, highly familiar with her material, you’d practically kill for anything that closely resembles her artistic brilliance from back in the day.  It’s like the perfect marriage between the vibe you’d find in early 90s Hip-Hop/Rap, and modern day artistic-Alternative vibes you’d find in the mid-late 90s…and yet all somehow brilliantly, new, fresh, relevant, and built for the right here & now.  As vibrant as it is versatile – “Love And Dancing” has the kind of crossover sound that could put this cut on a metric TON of playlists out there around this planet of ours, and put a whole bunch of shoes on the dance-floor in the process.  The hooks are EVERYWHERE you turn your head…the main vocals are immaculately beautiful & inviting, the beat is insatiable & dripping with audible style for miles, and BONUS points are well-deserved for the bars from Messy MC that you’ll find towards the end of “Love And Dancing” too…that was the cherry on top.  For a first impression overall though y’all – I’m tellin’ ya that this ticks EVERY box in the win column for a MASSIVE victory.

I’ll say this…energy-wise, there’s about a Grand Canyon’s worth of distance in between the way that “Love And Dancing” comes pumpin’ outta your speakers ready to party, and the more low-key vibes you’ll discover on “Where Did This Soul Go?”  Ain’t nothing wrong with that of course, I’m just tellin’ ya what to expect.  What I personally didn’t expect, was that I’d like the first track that much more than the second.  Don’t get it twisted – I like BOTH songs…it’s just that if I was to look at’em on paper, I’d readily tell ya I probably stand a much stronger chance of loving “Where Did This Soul Go?” and liking “Love And Dancing,” as opposed to the other way around, based on my personal taste.  Like I said, don’t get me wrong…I’m not giving EITHER of them up – or ANY song in this lineup of five for that matter, I’m just relating my experience in listening is all.  I’m usually in favor of deeper cuts, more melancholy vibes & all – so in that respect, I kind of expected & thought I’d eventually like “Where Did This Soul Go?” more with repeat spins…that it’d eventually rise above the incredible impact that Daw-ling makes with their first impression on “Love And Dancing” – but nope, it never quite pulled that off over this past week or so that I’ve been listening.  It’s a GOOD track – get off my back, jack…it’s like the difference between an A+ and an A at the highest point of the bell-curve…don’t blame me, blame them!  I’ll say this…had they added in another minute or so of the instrumentation they put into the mix throughout the song’s final forty seconds…I’d think there COULD be a case that “Where Did This Soul Go?” could go on to become my favorite over time & repetition.  Would I go for an ‘extended remix’ here?  You betcha.  There’s a seriously brilliant vibe that it seems like Daw-Ling is latching onto right towards the end, and I’d wager a bet the song would benefit from having a bit more of that in there earlier on than we find it here now.

The vocals in Daw-ling are absolutely OUTSTANDING, and have been on every cut – but I gotta say, I really like the fact that we can hear immediately on “Fears, Scars, Warm Spots” that they’re about to play the starring role this time around – a sound like theirs deserves the extra attention.  Daw-ling has SO MUCH goin’ on in the kickassness of the music that you get caught up in that throughout the first two tracks…again, it’s not like the recipe really changes in that regard here, the music is STILL as inspired & amazing, it’s just that you can tell the vocals get that 10% more of the spotlight than they have to this point…and it’s effective for this cut without a doubt.  Incredible use of guitar in this tune…for what’s self-described as “Fancy West Coast Electronica,” the use of the good ol’ analog instrumentation on this particular cut should drop your jaws in awe y’all.  We’re talkin’ highlight solos that NEARLY rival just how stunning & sensational the vocals on this song are…for what’s more of a mid-tempo type of jam, “Fears, Scars, Warm Spots” is immensely satisfying and thrives in between Daw-ling’s fast & slow gears.  In terms of sheer accessibility & universal sound & all that…I don’t think there’s much of a contest between any song & “Love And Dancing” in its original form…BUT…if there’s a track that gets CLOSE, it’s this one.  For a mid-tempo track, that’s actually quite the accomplishment…it’s a harder pace to find those tunes that can really hold the people’s attention, but “Fears, Scars, Warm Spots” really felt like it has the magic required to make that happen.  PLUS…I’m not gonna say I was RIGHT about “Where Did This Soul Go?” just prior…but…LISTEN to the effect that sprinkling in a bit more instrumentation earlier on into the mix has on a track like “Fears, Scars, Warm Spots” and how ALIVE this song sounds as a result will ya?  Coincidence?  I think not!  Like I’ve been tellin’ ya, Daw-ling has got undeniable assets from the music to the microphone, and it’s really all about finding that balance when both aspects deserve equal billing.  “Fears, Scars, Warm Spots” achieves something really special in finding a way to highlight the vocals more than the other cuts by comparison, yet also makes even more time for the instrumentation & music too…I’m not even all that sure about how they pulled that off, yet here we are & that’s what’s up.

The most you’re going to find me conceding to ya is that “Looking At Me” draws a bit more on repetition & mesmerizing vibes to work a hypnotic magic on ya, as opposed to what’s more substantial material content/structure-wise within the first three cuts…but just like those tracks, I’m every bit as inclined to turn this one right up to the rafters as well.  There’s a little less to it is all I’m sayin’ – a little less meat on the bone here by comparison, that’s all.  Is it any less entertaining?  Not really, no!  Daw-ling even makes references to the “hypnotizing” effect in the lyricism of this song, so it’s actually kind of natural that we get that echoed through the music we hear…it’s a highly chill, mellow groove, that’s essentially every bit as addictive as the rest of the Love And Dancing EP has been.  The attention to detail that you’ll find in this cut is pretty much staggering when you’re listening closely to everything that’s gone into it – so like I’ve been tellin’ ya…make no mistake, “Looking At Me” might draw more purposely on repetition to weave its web of sound, but the design still has all the intricacies you wanna hear in music made with real passion in the production.  Perhaps this might even be the spot on the record that warrants the biggest shout-out in that direction…we can’t help but notice how insanely great the performances have been, but let’s be real here – it’s been the production that’s kept everything standing out the way it should through our speakers as well.  For what’s SUPPOSED to be a “Sexy Laugh Riot” – I keep getting put in this position where I can’t help but take Daw-ling completely seriously for how amazing they are.

Did “Love And Dancing” NEED a “radio edit” though?  Probably a fair question…I’m not that sure it did.  Honestly, if your station ain’t willing to play this song in its original form in the first place, I’d be even less sure that your radio dial deserves the audible awesomeness that Daw-ling provides.  “Love And Dancing (Radio Edit)” gives us more of what we love in some ways…in others, I felt like this particular version actually ended up sounding less radio-friendly, and kind of suppressed the vibrant hooks of the song in its original form.  Good lord…they’ve got me sounding like one of those people I can’t stand that always say “A REMIX IS NEVER AS GOOD AS THE ORIGINAL” – but I suppose that is how I feel in this very specific case, this time around.  I ain’t refusing ANY of these songs or turning a single one of’em down – Daw-ling is only competing with themselves at this point…but yeah…gotta call it like I’m hearing it – go with the original recipe when it comes to “Love And Dancing” and you’ll probably feel like it connects in a much tastier way than the extra crispy “Radio Edit” does.  In addition to the comparison to Poe earlier on, I’d probably put an artistic innovator like Esthero in there as well in terms of some kind of reference for ya…but don’t think you should be able to coast on my descriptions y’all – LISTEN TO THIS RECORD!  I have had nothing less than a hammock-wide smile on my face throughout listening to Love And Dancing every time I’ve had the pleasure of giving it another spin…it’s a feeling I can’t get enough of, and I know that I won’t based on the quality of the tunes they’ve created & how they’ll go on to hold up over time.