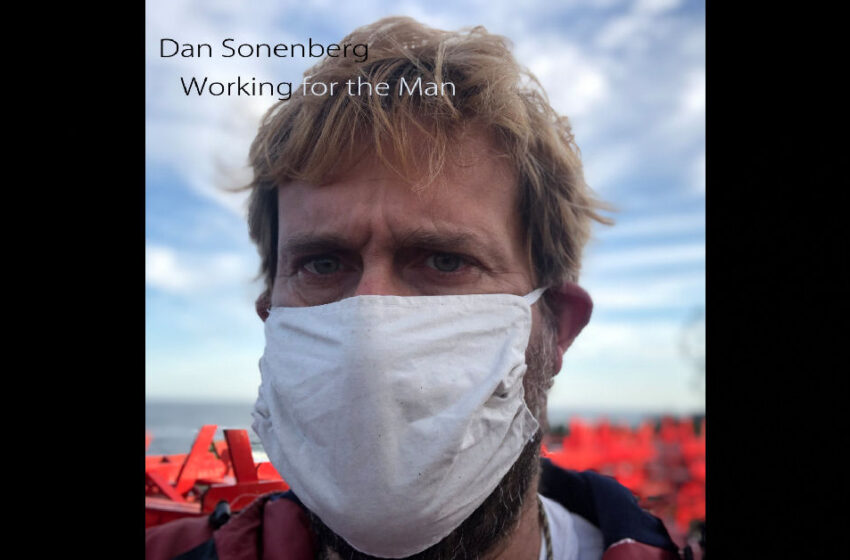 The inscription that comes along with the official online posting of this record reads:

Don’t mind if I do Dan…lemme turn this up – I like what I’m seeing here so far.

And no surprise when it comes to this cat – I like what I’m hearing too.

It’s been a while since we’ve heard from Dan, which would trace all the way back to 2015 with his band Lovers Of Fiction and a review of the album Long Overdue, where we were first introduced to the cunning complexity & stunning musicianship you’ll find remains a constant in his music no matter where he ends up.  Case in-point, Working For The Man, for all of its two-song track-listing, stays highly true to the style of the dude we know, largely inspired by much of the brilliance in music’s history from what would likely be the 70’s…a bit of the 60’s in there…but good lord, thankfully he doesn’t venture ever too far into where most of those excellent bands & artists we loved from those first two decades tended to end up in the 80’s.  When it comes to these particular new songs on Dan’s 2020 comeback to the scene as a solo artist, you’ll find that Sonenberg has a true gift for being able to include everything he wants to in a song from the lyrics to the music.  He leaves nothing out…he makes sure that the attention to detail is always there…he ensures that every second throughout the length of his songs uses the time extremely wisely – essentially, Dan is pretty much entertainment incarnate.  Much like what we experienced with Lovers Of Fiction in the sense that, there’s an inherent challenge posed to the average everyday listener for sure – but even with the progressive tendencies lining both the music & the words of the songs on Working For The Man, I’d more than expect there’s enough to pull people in via the sheer amount of purely interesting sounds & ideas that Sonenberg puts to work in these two songs.

On the merits of the freakin’ awesome, crisp sound of the drums & hi-hats tickin’ quickly at the very beginning of “Working For The Man,” Dan instantly had me listening.  You factor in the smooth moves being made by the bass running rampant throughout the verses with a vengeance – or the way the guitars & keys strengthen it later on down the road – the smart use of two different approaches to the vocals in a call-and-answer style…everything pops out beautifully from your speakers, radiating the extraordinarily imaginative sound we know & love Sonenberg for.  The way these layers interact…man oh MAN folks…lemme tell ya…you can hear just how much juice is being squeezed outta the instrumentation here – Dan’s responsible for every single thing you hear, and he…is…crushing…IT – and I haven’t even mentioned the chorus yet!  Don’t get me wrong…the musicians out there & people with a penchant for listening to tunes that don’t tend to adhere to the typical format of today’s hits – we’re all gonna love what he’s up to in the verses for sure…but admittedly, we’re more of a niche crowd; when it comes to the design, melody, and hooks of the chorus folks…well…those are bound to impress EVERYBODY.  It’s the kind of magical transition that you can’t help but fall in love with – even amidst lyricism that digs deeper into the state of things in the world today – for a moment, however brief, Dan blasts us off into space-like sound and we all get to leave the troubles he’s singing about behind & just marvel at the music.  As much as I’d love to stay there…the reason it makes such an impact to begin with is largely the result of having two main parts crossing over with such unique designs of their own; when you hear Dan hit the switch and slide straight into the dreamy sounds of the chorus, you can’t help but feel the entire mood & atmosphere of this tune reach straight out of your speakers & surround you in full…and ya just wanna bask in that melodic glow for as long as we’re allowed to stay.  Lyrically, he’s done a great job…you get a glimpse…an inkling…you think you have an idea of what “Working For The Man” is about – and you’re probably right – but there’s also quite a bit of flexibility in his words that allows for a lot of different thoughts & interpretations to creep in too, which is cool.  More or less, it’s likely a case where each of these lines all make perfect sense to its creator – and for the rest of us listening, it’s kinda our job to do our best to keep up to him.  While there might be a couple moments here & there where the leaps between ideas can be tougher to follow, Dan keeps the vast majority of what he’s communicating within our reach and gives us plenty of tangible imagery to grasp onto.  Verses like where he’ll sing: “There were some very fine people/On both sides of the issue/Believe me when I tell you it’s true” – and then answers with “Will you believe us when we tell you you’re through?” – come on now folks, that’s brilliant; from the structure of how it’s laid out in the call-and-answer, to the message itself, absolutely brilliant.  Read between the lines of this song, dear readers, dear friends – and VOTE.  Incredible guitar solos…tone & style that is straight-up off-the-charts cool, and a finale that raises the stakes through your speakers just the way you want it to – “Working For The Man” is 100% rock-solid.

While you’ll hear a defined Bowie influence that roams through the chorus of the first cut for sure – when it comes to “Don’t Play” afterwards, the comparison becomes impossible to ignore.  Somewhere in the Stardust-realm of sound, Sonenberg is freakin’ magnificent in his theatrical execution, and you gotta give the man serious credit not only for the musicianship & vocals he puts in, but also for the way he conquers such impressive & ambitious ideas with unbridled confidence.  Like, there’s never any hesitation, never any timid moments where you feel like he could somehow put more into what he’s composed – the professionalism in the results of his efforts is a remarkable element to behold and a very large part of what makes something as unique as his tunes find a new degree of accessibility.  It’s hard to argue that “Don’t Play” isn’t perhaps the stronger of the two cuts if we’re talking about the overall appeal to the masses out there – the structure of this second track lends itself to a more traditional design that ears would be more comfortable with by comparison to “Working For The Man.”  That being said, I think the chorus of that first cut probably still provides the most memorable highlight you’ll find between the two songs – but I suppose the bottom line is, there’s nothing at all not to like or be disappointed with here.  Unless you just hate creativity, in which case, have at it hater, you do you.  Personally, I’m probably just slightly more partial to the title-track by a tiny margin – but if there’s one thing I can certainly appreciate perhaps even more about this second cut, it’s that you really get to hear Dan flex his vocals with finesse, style, and swagger throughout the versatility demanded of him on “Don’t Play.”  As skilled as he most clearly is on each & every instrument he’s chosen to play on these two cuts – you get a real dose of what he’s capable of as a front-person/singer on “Don’t Play” that simply can’t be ignored.  Dude’s got that magnetism you’re looking for on the microphone…the sound of an artist so locked in the throes of their creativity that the entire world has faded into the background – there’s the music, the moment, and the man…no more, no less…and that is all Dan Sonenberg needs.

Awesome to have this guy back in action where he belongs.  You listen to a short record like this, and you can hear exactly how much has been put into it, the creativity it possesses, and the stunning confidence that Dan displays in pursuing his art & music so enthusiastically without hesitation.  It’d be hard not to appreciate such commitment & dedication to the moment – you can hear Sonenberg is as captivated by these songs as a player as we are as listeners – and that sure generates one hell of a ride.