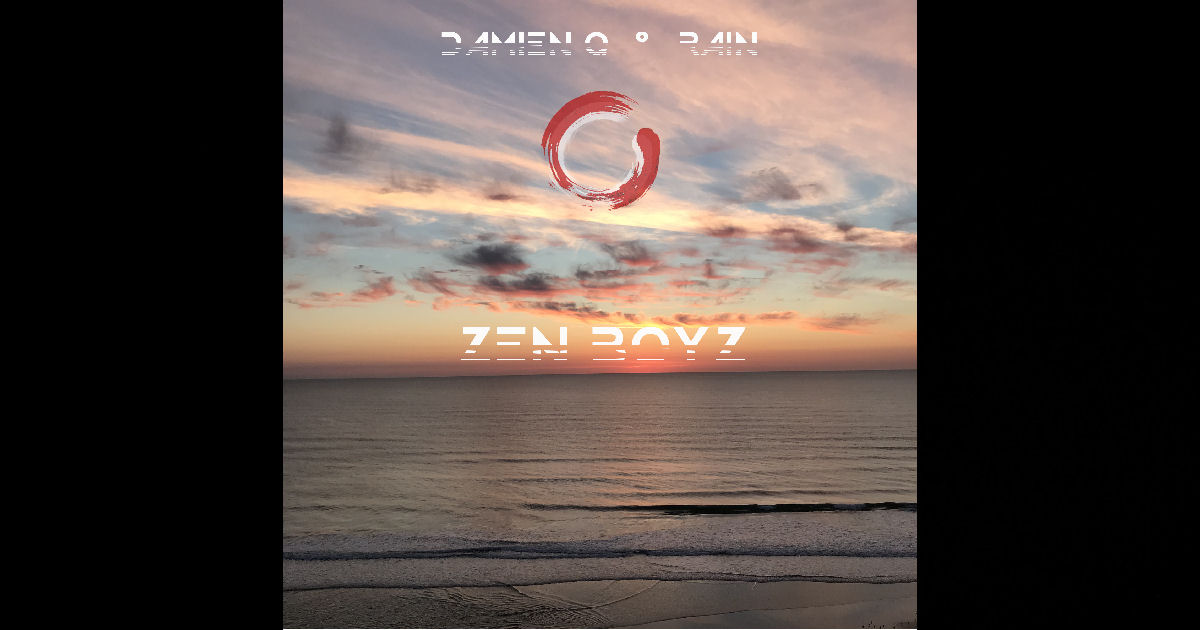 Here’s where I’m at with this latest single from Damien Q – I think he’s got an all-or-nothing tune here.

I say that for a couple reasons.  “Zen Boyz” definitely has the advantages of a modern-day vibe that is currently relevant & all over the airwaves out there…that’s where the ‘all’ comes in.  Where things get more difficult for Damien Q and Rain on this single, is that it’s probably a bit sleepy for a single overall, and maybe arguably wanders a bit too far within the confines of length.  Despite some truly significant highlights you’ll find in the music & vocals throughout “Zen Boyz” – facts are still facts…it’s always going to be an uphill battle to get people really excited over a mid-tempo or slow jam.  That being said – what Damien Q here has got goin’ on with Rain on “Zen Boyz” might just appeal to a whole different crowd…

Specifically, the audiophiles like myself that are out there listening.  A lot of credit should be given to the ideas, ambition, and overall execution when it comes to both the production & performances you’ll find on “Zen Boyz.”  I get that it might not be the most straight-ahead sing-along you’re gonna hear in 2019 – I get that – but what it might not appear to have as much going for it in terms of tangible hooks, this single makes up for completely through a seriously compelling mix of interesting sounds combined.  And that’s a factor that makes itself known immediately, right from the bending of notes, space, and time that occurs on your way into the track, to the reversed beats and clever electro melodies & percussion that you’ll experience throughout “Zen Boyz” – everything has a genuinely fresh sound to it.  Ultimately, there’s a really uplifting energy that flows smoothly throughout “Zen Boyz” – as chill as it can be at times, it’s a single that plays as one comprehensive idea…you can argue there’s a hook here & there, but it’s actually the entire song that stands-out for its impressive high-quality sound & versatile structure.  You’ll notice things like the smart effects being used on the vocals, the brilliant whispers that float from the lefts to the rights, or the beat that sweetens the whole deal around the 1:20-mark – you’ll notice that you can practically reach right out & touch the texture of the music being made here as well.  You’ll notice the impressive use of percussive rhythms and a stunning array of sound selection at work – combined with the vocal rhythms, “Zen Boyz” continually entertains in a completely engaging way.  It’s enticing, it’s chill, it’s unique…these are the things I like most about this single…it genuinely feels and sounds like a journey & experience I haven’t had before in music…my ears are always gonna appreciate that – yours should too.

And so what if “Zen Boyz” ain’t exactly gonna send you running to the dance-floor or get you writing home to mom about it…not every song needs to be so hyped-up & hot that it’s gonna scorch the summer.  Sometimes a slow-burning fire can be much more effective in bringing the people back to listen time & time again…genuine substance…know what I mean?  You’ll find that here in what Damien Q and Rain have achieved with “Zen Boyz” – it’s modern, but not typical – it’s completely compelling to listen to, yet it’s not catchy in the normal ways most people would expect from a single either.  Honestly, before this song is even twenty-five seconds in, I’m already hooked on hearing the rest each time I spin it…LISTEN to the selection of sounds & textures coming at ya!  Really impressive use of how each layer interacts with the rest – you can hear smart choices being made in the mix by paying attention to what’s up front, and what’s nestled in behind, supporting everything else going on.  That’s when you start to notice & appreciate just how complex a ton of this track really is and just how much is actually going on with it, despite how chilled-out it may appear.  By the end, you’ve gotta hand it to Rain and Damien Q…because there’s no other way to describe a cut like “Zen Boyz” other than next-level.  It’s gonna be hit or miss with the people listening…they’re generally either gonna dig the style & flashy modern-day vibes or they ain’t – but that’s on them.  When it comes to what Rain and Damien Q pull off on “Zen Boyz” and what’s in their control, they’ve revealed authenticity, innovation, and professional execution – it’s actually a seriously progressive tune with a unique structure that sounds spectacular.