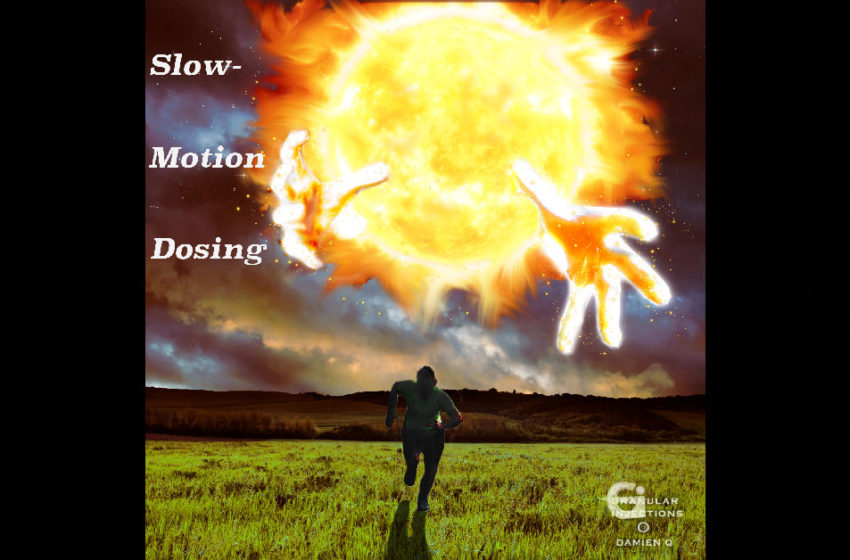 What a bizarrely addictive track.

I looked at that first sentence for a while.  I wrote it with a period at the end originally then thought to change it to an exclamation point, then settled back on my first instincts.  Don’t get me wrong…I’m actually pretty damn excited about this tune on many levels…enough to warrant an exclamation point if I had wanted to use one – but I left it with a period to give that air of conclusiveness to my decision.  Like any artist out there, I do my best to consider each word, pause, and ellipsis I end up using in these reviews…I used a period because that was how definitive this whole experience felt.  Fascinating, period.

I am what you would call…’still learning’ about the music of Damien Q, and this is my first introduction to Granular Injections; I don’t really know who’s doing what for a full 100% certainty…but I know a collaboration that works when I hear one.  The last time I reviewed Damien Q’s music was last year when we discussed his single “Zen Boyz” featuring Rain…and while I wouldn’t say it was so much of a mixed review, I also wouldn’t say that the previous single I checked out quite had as much allure as what you’ll hear on this new cut “Slow-Motion Dosing.”  Mind you, aside from the fact that they’re both collaborations and feature Damien Q, we’re talking about two totally different vibes and the REAL facts are that I’m only supposed to be talking about one of them to begin with.  You see how I consider each & every word so carefully?  I write out entire paragraphs only to reconsider what I’m writing, in writing.

Must be the pressure getting to me.  Damien Q & Granular Injections know what I’m talking about.  They prove it when the line “What can you control?” in “Slow-Motion Dosing” is answered quickly afterwards with “nothing nothing nothing nothing nothing nothing…” – and they certainly ain’t wrong about that.  I just write about what I hear…if that means I end up questioning my decisions in real-time, I figure that’s just about the most honest way I can communicate anyhow.  It’s the music that steers these words.  “We all want control,” as this collaboration will explain to ya…but that’s one damn elusive part of life.  I surrendered my control of these playlists, albums, songs, bands, and artists I listen to a long time ago with the pure intention that knocking down that wall would open up doors to all-new experiences.  And here we are…songs like “Slow-Motion Dosing” are further confirmation this was a worthwhile decision.

Because you’re not gonna hear songs like this on the radio…you gotta go underground & online if you’re gonna discover something as artistically-inclined, inventive & creative as this collaboration is.  “Slow-Motion” has the distinct advantages of incredible sound-selection – we’re talking smoother-than-smooth vibes that slide right through your speakers and still manage to keep you on the edge of your seat at the same time.  With the brilliantly erratic & scattered vocals on the surface leading the way, that franticness becomes a perfectly juxtaposed sound in comparison to the music…and that mix of like, pure tension…makes it feel like this song could snap right open at any point and take a completely different turn altogether.  It’s almost like you’re hearing a concentrated effort…a battle to maintain “control” – and whether that’s the ultimate intentions or not, it’s definitely a huge factor as to what grabs our attention.  I wouldn’t exactly say that the music without the vocals would be more typical, but perhaps would have ended up giving “Slow-Motion Dosing” a really safe level of accessibility with the masses out there…because I don’t think there are many out there that could resist the vibe you’ll hear at the core of this single when it comes right down to it.  That being said…for those of you out there that do ‘get it’ and find yourself absolutely locked onto the magic being made over the microphone here alongside the music…well what else can I tell ya other than your ears are working every bit as well as my own still are?  Sure it’s loosely structured, sure it’s avant-garde in many respects…but as sure as pressure forms diamonds, you get something rock-solid here when it comes to the overall ideas and execution; this is a uniquely committed performance that you don’t often hear inside of such an experimental framework.  Once you start branching out, it’s almost natural to have a timid or cautious sound creep into the mix at some point along the way, but what I hear from Granular Injections and Damien Q on “Slow-Motion Dosing” is the sound of a collaboration that is confidently locked into the moment every bit as much as they should be.  Or maybe, as the lyrics might imply, they really don’t have much of a say in that…maybe the moment has taken them over – either way, it sure sounds good to me.  As a result…as odd as it may appear at first…the sonic appeal of this single is strangely monumental…listen to epically sly moments like around the 1:30 mark in the breakdown – you telling me you wouldn’t listen to another five minutes of that if they were in there?  You would so – and so would I.  There’s a real smorgasbord of rad sounds & ideas inside of this tune; it’s absolutely antitypical and almost inexplicably addictive, but the courage to follow their instincts, their clear commitment to giving their best to this tune, and the stellar performances they put in, all stack up to a song that’s strong enough to breakdown a whole bunch of barriers between what people know & what they think they know about the music they wanna hear.  Surprising, fun, wild…the reactions towards this song could vary as much as the frequencies shift over the final forty-five seconds of “Slow-Motion Dosing” do – but I have the feeling we’ll all come to the same conclusion somehow…this cut is fascinating, period.