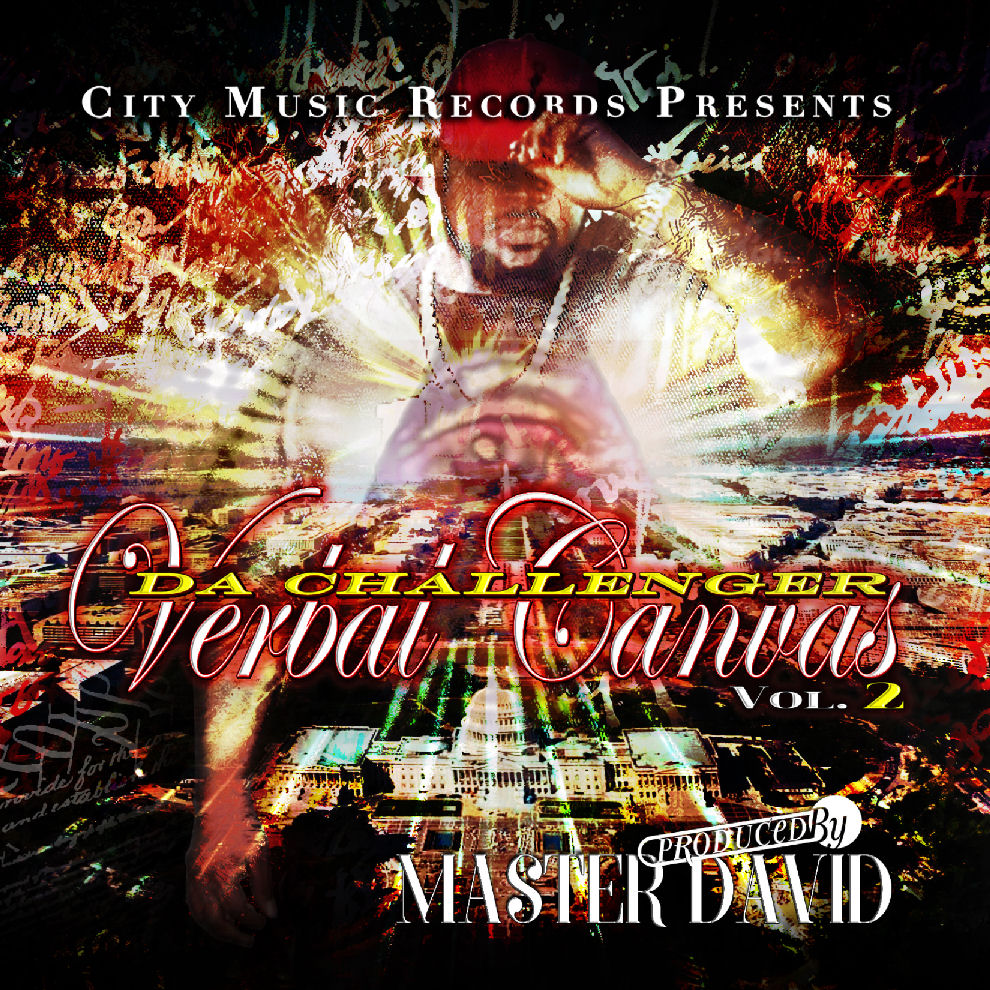 Well…here within the pages of sleepingbagstudios, you’ll see it’s much more than that – we’ve been following and listening to the phat tracks of Da Challenger for some time now and have checked out pretty much everything we can since he dropped Verbal Canvas Vol. 1 on the hip-hop nation.  Do we expect quality on this release from Da Challenger?  HELLZ YES.  And we have every reason to – he’s proven himself to be one of the most reliable & hard-working out there in the independent scene today…and aside from that…sequels are usually sooooooo much more successful in music than compared to the amount of times you’ve seen a good second-chapter of an original movie you loved.

Right away the atmosphere immediately closes in on you on “Get Get Get It” – Da Challenger instantly introduces the familiarity of his style & swag on the mic with a barrage of words that fit the beat & meter perfectly…it’s one of the lead-singles from this record we had the privilege to check out before this album dropped.  I might be crazy but it sounds like he’s either kept working on this cut or added to its production…in any event, it’s a solid cut and great choice to get Verbal Canvas Vol. 2 off on the right note.  Check out my previous thoughts on “Get Get Get It” in the pre-release review here.

“Gotta Keep Moving” was the first all-new cut for me to experience from this record…and what I heard excited me.  Flow-wise, listen to how ‘right in the grip’ Da Challenger is here as he weaves the words into the fabric of the beat – he switches into the chorus of this cut SO SUBTLY…but it works!  Usually I feel like there needs to be that defined separation between a verse and chorus…and in most cases, raising up the energy in the chorus to add that punch into the song.  With “Gotta Keep Moving” – I thought it both worked for the concept of the song itself and the entire sound as a whole to keep this one on an even-keel and really creating a solid moment in time.  It plays like a full-on experience and never loses its captivating atmosphere…I was hooked on this cut immediately and once again impressed by the way that Da Challenger continues to write from a personal angle and create a storyline that you truly follow and want to listen to.

Those same attributes of strong writing and cohesive storyline come into play on “Loved & Lost” – another track we checked out before hitting up this full-record.  Check out my thoughts on this track here – but if I can further the point…he made a great choice for a lead-single in selecting this cut.  Solid sample driving the music, flawless performance on the mic and completely defined hooks that are absolutely memorable; I played this cut on the SBS Podcast even…what can I say – it’s a strong-ass tune!

So for me…from here on in…I’ve got all-new songs from Da Challenger in front of me and haven’t heard anything else prior to this release.  “She Got Me” – I mean…c’mon man!  I LOVE this!  Da Challenger reveals himself to be the poontang-hound that he is as he ummm…’acknowledges’ the beauty in the opposite-sex in some truly expressive ways.  Reminding us that at the end of the day he’s a lover not a fighter – the lyrics on this cut are INTENSE and some of the best you’ll find on this record…the storyline will bring a grin to your mug and raise an eyebrow or two for certain while you groove along with the vibrant, old-school sound of the beat.  Love the bass-line driven melody and the way that this track allows Da Challenger to put real energy into the flow and into the words…the story he’s created is certainly a memorable one; you want to catch every single word as he spits them and thankfully, due to his professional approach and precision delivery – you can.

Again…we were expecting quality from this reliable emcee – but check out the immaculate work he’s done on “Heart Vs. Mind” – and you’ll hear Da Challenger right in the heart of the moment and right in the flow.  I stand behind what I’ve heard to this point delivering and being on-point…but I gotta admit, “Heart Vs. Mind” started to take this album straight-up to that next level.  I LOVED this tune…the flow that Da Challenger has found to go with this incredibly smooth vibe & beat…MAN…I mean…if this ain’t the vision come to full-fruition I fail to understand what else he could have been after.  Absolutely thought he nailed the vibe beyond comparison here on “Heart Vs. Mind” – everything from the music to the words to the writing to the performance all add up to a track you can’t miss out on from this record.

Behind the scenes here…I often get the opportunity to talk with a few of these artists.  Da Challenger himself guaranteed me that what I was in for was going to be ‘straight hip-hop’ and ‘strictly boom bap!!’ – and yes, that’s correct, there were TWO exclamations points on that statement at the end.  I’d imagine one of the strongest reasons for that statement to have occurred is because of “Rock With Me” – which is the old-school recipe cooked up to perfection.  You gotta appreciate this cut for what it is…it’s a complete nod to the old-school sounds at the root of his influence…and I honestly think you can hear just how much fun that Da Challenger is having on this cut.

“Live To Be Something” really has a wickedly smooth vibe to the bass-line in the music & beat combination…and Da Challenger thrives in a minimalist setting like this.  You really get a great example of how he creates his words to suit the vibe…and overall, I think Da Challenger has really put the work into creating a more diverse and versatile set of rhymes throughout this record.  He’s coming up with fresh flows that each sound unique from the last and performing his lines with perfection to the metering & pace and exploring the depth of his own personal style.  Lyrically, “Live To Be Something” is another incredible example of his ability to provide an entertaining and personal narrative…there’s a lot of ‘him’ on this track…you feel like you get to know the song’s creator really well here.  Featuring Brother-D backing him up and in the chorus…he’s got that slightly off-kilter approach that ends up finding a perfect fit here…you know the kind of hook I’m talking about…it’s the kind that you hear the first time and you’re unsure of and by the second time you hear it you’re sure you want to hear it a third.

The amount of style that he brings to the mic is important…it really plays a role in what we hear.  Listen to something like “Seeing Is Believing” – and recognize that if Da Challenger’s personality and character were absent from a cut like this…that there’d be next to nothing there at all!  The music is minimalistic but tight – and it’s certainly not a complaint from me – I’m just pointing out the fact that this guy really brings it to the mic not just through the intensity of the vocals, themes and writing, but also in HOW he approaches the mic and puts himself right into the vibe.  “Seeing Is Believing” ended up being one of my favorite cuts on this record…lyrically, he’s crushing it – but overall, I felt like this one largely left it on Da Challenger’s shoulders to deliver the entertainment to our ears and I really felt like he pulled it off.

The old-school rhythm & groove comes ripping into the room once again on “Baby Cakes” which really bridges the gap between early hip-hop and early 90’s R&B in how it sounds.  The resulting combination works in Da Challenger’s favor…pivoting and shifting his words expertly throughout the bars on “Baby Cakes” – the electric & authentic energy his personality puts into his music absolutely keeps us focused on the main-star of the music.  Da Challenger keeps it all on-pace and all on-point, pushing off of all the right spots in the flow to get the emphasis to the words right to all the places it needs to be.  Another dose of his romantic side – he’s chasing the ladies in hot-pursuit on “Baby Cakes.”

Whoa.  Hang on a moment…did he just mention ‘reverse cowgirl’ on “Burn One, Drink Some?”  Things are getting WILD up in here – be ready!  Personally I dig it when Da Challenger flies off the handle like this and brings a solid combination of humor & seriousness to what he does.  Many of these lines might sound like jokes to you…until you get to know the man behind the music a lil’ bit…then you realize that the words simply reflect the way this man really lives his life.  Da Challenger and his music are one complete entity…he lives and breathes what he rhymes about and it’s not just the magical art of wordsmithing…I mean, he’s damn good at that too and that helps & all…but the point is that these rhymes reflect the real life of the player behind the game.  Incredible beat & groove to this cut…reminiscent of something you’d hear in like, Blackalicious…that solid walking bass-lines providing massive punch to the energy has Da Challenger amp’d up and keeping the words coming on strong with intensity and passionate delivery.

“You Don’t Know Me” is a showcase display of Da Challenger’s grip on the verbal-hook.  These words of his slip & slide right into this beat like they were meant to be there…and you get a great dose of the classic-version of Da Challenger here with his own story driving the narrative strongly here.  A song that’s basically built on a ‘come at me bro’ attitude – the man himself reminds us all that anyone stepping up better be ready to bring their A-game in a battle.  Maybe a bit heavy on the low-end of this tune…he’s rattling the pictures on my walls pretty solidly here in the studio on “You Don’t Know Me” – but in all honesty, I’ve also got this TURNT UP loud & proud.  Da Challenger is claiming Da Victory on this set of tunes here…there’s tons of highlights of his own personal achievements all throughout this record and he’s clearly demonstrated with confidence that he is indeed, a player ready to play the game better than the rest.

Aside from the occasional slight difference between volumes on a couple cuts and the record plays…not much I’d change if anything at all on Da Challenger’s new album – I think he’s really nailed it solidly here.  Giving thanks and summing up the story over the “Outro” – you can tell from a track like this that even in behind the poon-hunting, large & looming presence that Da Challenger has – he’s still a completely humble artist at heart.  “Outro” speaks volumes about his character at the end of this record…he really speaks direct to us all here as supporters and listeners and leaves us with the conclusion that he’s committed to follow his talent & path wherever it may lead to next…and you gotta love that.