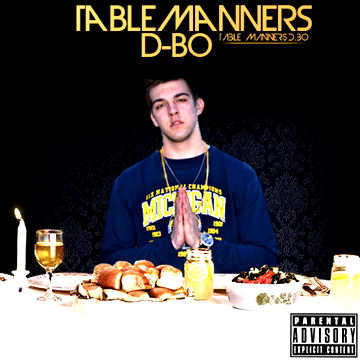 This was an interesting review for me to do. By the very definition of a mix-tape a listener is likely to find some elements they find amazing and some that don’t appeal to them as much – it’s a music-game that requires skill in sample choice and production. This is music from the underground assembly line – and once created can earn the producer behind the mix a lifetime of street credit if they get it right.

Does D-Bo, aka Davinn Boersema, get it right on this mix-tape compilation Table Manners? I think so. I can’t profess to know as much about the mix-world of music as I know some people deep within the genre do – again, I know what I like and I know what works for me as an artist and as a producer myself – but I’m far from mixing tapes as well as D-Bo has done here on Table Manners.

When you look at this music in that “assembly-line” view – imagining building this up from nothing but pieces to what they’ve become as songs will give you a genuine respect for what he’s doing. There’s no possible way that what he’s done here was easy in any way – this is something that has taken work to put together and to put himself into.

Not only listening to the album but checking out his website information as well – you can see the reactions from the people out there – it goes beyond the positive. The amount of people shouting out this mix-tape from D-Bo is pretty spectacular – gives you an impression of just how many people are out there looking for this type of music right now. Again – do it well and they WILL shout you out like they have all over the D-Bo sites; do it poorly and risk anonymity for the rest of your musical career in a sea of “almosts.”

I’ve personally found something to like in every track – but that might be easier for me than some. Whether it’s the brilliant assembly that starts up Table Manners directly in the intro track and into the next called “My Mind,” or the wicked lyrics and flow of a song like “Perserverance,” or listening to “King Of The Castle” – a track that uses the kings of the samples of this mix album – there is an element of every track that you can get into and appreciate what D-Bo was going for when he put it together.

Here’s the one thing that might throw you off: The tone in D-Bo’s voice tying this all together. Is the skill there? Yes. Is the flow itself there? Completely – Davinn can absolutely find a great way to be relevant in every track he’s putting together. Does it sound like it is supposed to be there? That might be the one question mark you have – and again, it comes down to the actual sound itself – the tone in Davinn’s voice isn’t thin in the mix – it just sits a little naturally higher in tone than the rest of a compressed and bass-tone driven mix-tape. Is that even bad in mix-tape world? I doubt it. And again, make no mistake – it’s the tone, not the flow. On a lyrical level D-Bo has written some tight rhymes here on Table Manners.

Why I point it out though, I suppose…well, I suppose it’s because when bringing all of these samples and beats from other artists together – the hardest thing to mix will always be your own parts into these. It requires a lot of knob twiddling to make it sound natural and like it was truly meant to be. Again – listen to “King of the Castle” by D-Bo and see where he has gone beyond and kicked it into full gear. This track has everything – massive swells in the beat, great pop hook and to me – this is absolutely nailing that spot you want to find the vocals in – almost a touch down from the rest or a knob twist different than the others. To me, on a full album of beats worthy of busting moves in my chair to – this track was a standout and really shows you the full capabilities of what D-Bo can achieve.

Regardless of my own, or anyone’s preference in how it’s produced and mixed – the completely undeniable fact is that Davinn “D-Bo” Boersema has a great skill and craft in putting not just an entire track but an entire album together. And all those people out there that don’t think this is “music” because of the genre, or the way it’s put together – your arguments are so tired and need to be put to permanent rest – this IS music – I know that cause I’m listening to it; argument over – that simple – every single time. There is an art to knowing how to manipulate sound and feel and be able to turn that into a new song – this new album and mix from D-Bo shows you that skill in full display track after track.

I’m far from alone in this. Davinn Boersema is doing what he loves most and that has become an audio tangible – it’s in the form of Table Manners – his new mix tape. Go get it!