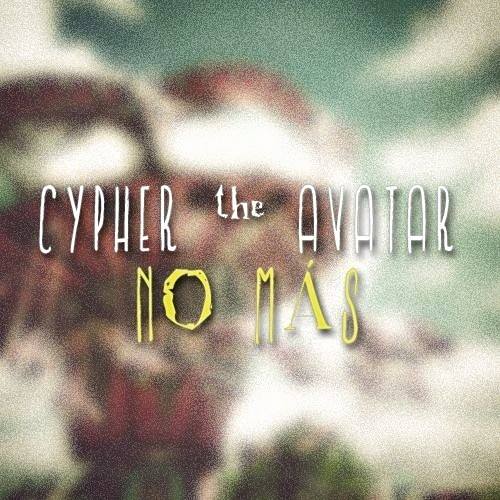 Cypher The Avatar…from what I’ve known, read, researched and heard about this dude since being introduced to the sound, music & style of this emcee about eight months ago was that this particular poet was walking alongside a whole different beat in life than the rest of us. True to the expectation and legend growing behind this alternative hip-hop artist – his latest NO MÁS EP is a clear example of innovation and re-invention of a genre that has plenty of room still to find that extra artistic & creative-level. Cypher The Avatar might just be the type of rapper that restores some of the magic & wonder into the rap/hip-hop genres that’s been missing of late…because there’s quite honestly a different perspective, performance-style & flow to the music he makes – you can hear that instantly on NO MÁS.

The atmosphere thickens immediately as you head into the pensive-sound of the haunting melody in “Fuck Him, Her and You I’m A God.” A clever beat built on desolate rhythm & tone from the guitar-sample…percussion elements and electro-samples are woven in smartly as this first tune works an exceptional hypnosis on your mind. Cypher himself comes out swinging loosely… It’s almost to describe exactly what he’s done here on this opening song…he’s not ‘defeated,’ he’s not ‘lazy,’ but you can hear what I mean when I say he kind of wanders through this first track with a downtrodden and thought-provoking performance and atmosphere throughout the track. You can tell that “Fuck Him, Her and You I’m A God” is built on the internal-engine that puts the steam into Cypher The Avatar’s thoughts…it plays like a highly-personalized set of observations on the realities of his current state in life. It’s easy to follow this guy down the rabbit-hole and into his mind here on the NO MÁS EP …he spills his thoughts, opinions and perspectives out clearly and the sound of this first song really sets the tone for the songs to come, all built in a similar & cohesive style/sound that all reflect on CTA’s personal journey.

“demisexyouall” is an odd one. With music that drifts in slowly with backing vocals pulsing in & out as another isolated/haunting melody-line on the guitar fills the background. Just before a minute-in, the beat drops and “demisexyouall” starts to move on a slow-burning grind stocked-full of sexual content. A self-confessed ‘demi-sexual with pride’ – Cypher The Avatar doesn’t hold back on the description in this cut…it’s pointed direct with its hard-lyrics spelling out the reality and gravity in his situation. Using a layered technique on his vocals…in some ways I think it works…in others I’m not so sure it actually adds anything significant other than a twist on Cypher’s vocal-sound…and again, I’m just not so sure that it’s necessary. Though it makes the verse unique in “demisexyouall” – I could also point out that it makes the moments outside of the verse ring through clearly…and that the stripping of that layer from the vocals on the chorus of this track really makes these parts stand-out in comparison. That being said…the flow is still on-point, the lyrics as well…and overall it’s still another unique experience within the realm of hip-hop music by far.

I think he’s done a smart service to this EP with ending it on “My Euphoria Is NO MÁS” – this title-referencing final-cut takes it back to the more haunting atmosphere you’d have found when the record opened-up on the first-track. Working that angle of haunting-melody and tight/subtle electro-percussion filling up the cut while bizarre backing-vocals come floating in & out of this hypnotic last song. “My Euphoria Is NO MÁS” really does find a brilliant way to end off this set of three tunes with an audibly cohesive progression and final conclusion to what we’ve been hearing so far on the NO MÁS EP. Cypher The Avatar delivers some of my favourite lyrics and his performance on this final-track is probably my favourite from him on the record. The way it all weaves together with its tricky-lyricism bending syllables back & forth at-will…Cypher still keeps the feeling loose, the music eerie and the thoughts heavy – but I’ll be damned if this can’t be called entertainment. What he’s done on these three tunes is create incredibly realized & rich textures to the music and really put the right amount of his own extraordinary & versatile style into the lyrics – and the overall result is truly unique within the hip-hop & rap-genres.

So yeah…suppose what I’m saying is…if you’re tired of the same old shit – listen to some Cypher The Avatar instead. His off-kilter imagination provides a perfect amount of creativity and innovation and the NO MÁS EP overall is an experience unlike any other I can personally recall; and you know I love that.