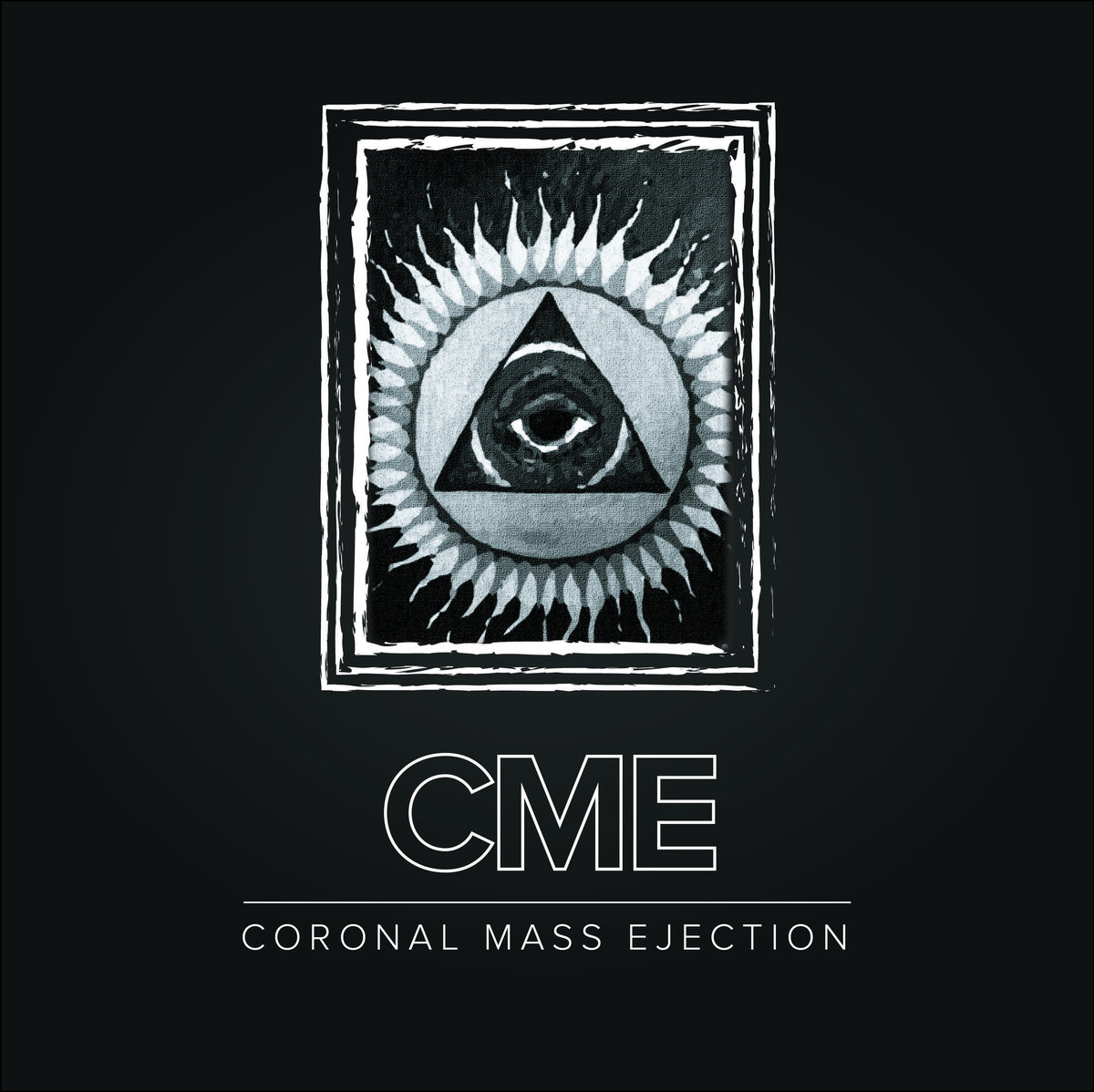 There’s some seriously mind-blowing shit happening on the five-songs from this three-piece out of Philly, PA…like…monstrously-massive music that hits hard in every direction with passionate instrumentation that really highlights the commitment and dedication to the music that the players in Coronal Mass Ejection are making on this new self-titled EP. The impact is immediate in the growling sounds of the opening intro-track, “Intra” as the new EP begins…it’s a mean-minute of a start to what becomes an epic set of instrumental songs with enough punch in them to knock out your mom from sheer proximity to the speakers, music or overall awesomeness of this incredible find.

The EP crashes and storms solidly into the full-length opening cut “Origin Of Species” and proceeds to showcase deadly riffs, heavy amounts of distortion and sonic-bliss pretty much every direction you can check this track out. Truth be told…this review could have (sorry guys) come out much earlier today were it not for getting lost in the gigantic, heavy-rhythms created by Coronal Mass Ejection on this EP. Particularly, “Origin Of Species” and how brightly this one burns, explodes and grinds throughout its wicked-melody with guitar-fueled intensity and low-end sitting perfectly in the mix as the drums rip raging-beats and hard-kicks. It drives hard into progressive-psych-rock and as a first full-on experience into the insanity, madness and stunning charisma the bleeds into the attitude of the music.

“Aquired Immunity” takes the intensity of their sound into a slightly more melodic-groove, still heavy and filled with massive drums and guitar solos as the sound of CME takes an even more defined and accessible shape in this third track. Drums seriously roar throughout this one…as good as the winding guitars are…as good as the bass gets…hard to outshine the sheer pounding force back there on the kit beating the hell out of the drums with hammer-fisted, rabbit-footed fury. Excellent breakdown where the guitars shine around the two-minute mark as the drums carry out an entire drum-clinic’s worth of tom-beats. NO JOKE…I mentioned how this review could have come out earlier…I know I have a responsibility to get my articles out on time and all…but from an honest-reviewers stand-point, I firmly believe that they have NO ONE TO BLAME BUT THEMSELVES. If they didn’t slay it so damn hard, precisely, innovatively and with such gripping intensity, I’d have been able to truly focus and have put this out in the morning. It’s their own fault…but I’m also supposing this wouldn’t be such a bad problem to have. “Aquired Immunity” rages and burns perfectly as its melody builds and the bruising-depth of their grind sinks in further the longer it plays.

They’re beefy songs in every aspect. From track-length to the kick-drum’s hard-edge and crunch to their distorted riffs, CME takes full ownership of their sound with tremendous & relentless confidence. One of the best examples coming through “S3FB” which takes a winding, bending riff for a ride at the track’s beginning before the band rips this one open to fully explore everything that this direction had to offer them. And just before a minute’s time…this track turns-up the amplification and brings the entire cut roaring to life like a tank engine about to head out and storm the battlefield. The complexity and timing is equally impressive…they get all kinds of Tool comparisons I’m sure…moments like the middle of “S3FB” and the impressive way this all snaps together from each player bringing their intensity into the breakdown nearly three & half minutes in are seriously gripping moments in time you won’t forget. Great layered guitar-work and rhythmic bass slide around and basically bend space & time around you while you try to keep your grip on the drum beat as it shifts around effortlessly from part to part. Bending space & time…no big deal…all in a day’s work in the music & life of Coronal Mass Ejection.

Ending on arguably the most epic track in the set, it’s less than thirty seconds before “Scent Of The Moon” begins to show the massive potential for the huge direction it’s about to blow-up into. Teasing you at first by throwing the up-tempo part of their grind in quickly amongst the heavy, slow melody they’ve set into so well on this final-cut, when the bass becomes a huge presence and starts to take-over just past the two-minute mark, you realize just how serious this track is about to get. Winding through echoed guitar tones, the presence of that bass brings the music roaring to a full-boil around 3.5 minutes like it’s hell-bent on crushing you personally. You get a little more of the experimental-side of CME through the middle of “Scent Of The Moon” before the band continues to rage through complex timing changes and strongly defined parts that all pack intensity, impact and memorable hooks. For instrumental fans…this is exactly the kind of music that holds up entirely and potentially could last you your entire lifetime – and you can take that from a guy that’s pretty much spent about twenty-four hours listening to these five songs as much as time allowed. Coronal Mass Ejection has 100% found a way onto my playlist for life…they remind me much of Sky As Skin from back in our past reviews here at the homepage. There’s brilliance stamped all-over this album from production to musicianship…and the potential for this band to continually blow our minds collectively in the future is a heavy & heavily-glorious probability I’d be willing to bet on.