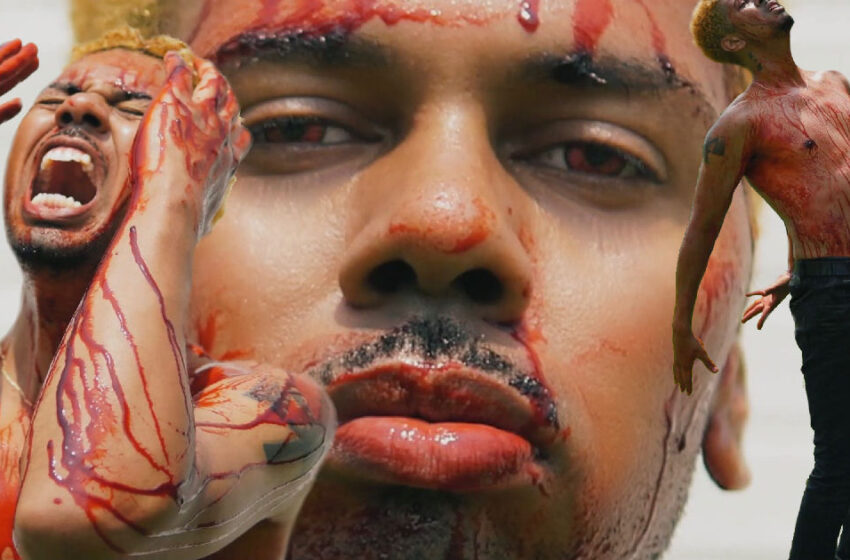 “The streets is bloody…”  – and clearly the video is too.

Charisma, character, true grit, and artistic courage…these are attributes that can carry an artist one hell of a long way, and Cornelius Wright has got’em all workin’ well in his favor.  If you somehow couldn’t hear it, believe me, you’ll see it onscreen in the brand-new video for his single “It’s Dark And Hell Is Hot” – the man’s gone all-in here, covered in blood, and holding nothin’ back when it comes time to perform – that’s a recipe for success when you combine it with the fired-up determination you can tell he’s got.

Cornelius has got that DMX-level (R.I.P.) of intensity when he’s hittin’ his bars…and while it’s obviously still tragic that we lost one of the greats, the reality is that creates major space out there in the scene for an artist like Wright, and the opportunity for him to thrive & supply a sound & energy that fans all over the globe undeniably connect with.  Bakin’ in the sunshine & bustin’ moves while he’s growlin’ rhymes at us – CW details the personal hell he’s created for himself in his mind, and delivers the intensity you wanna hear inside a concept like this cut has, in addition to making a visual impact onscreen with his straight up fearless approach.  Therein lies the blueprint y’all – pay attention – it’s about conviction, it’s about commitment, it’s about giving everything to the moment, no matter how you gotta get it done, whether that’s finding a space you’re comfortable in on your own, or working with people you know you can rely on to get the best outta ya…whatever the methods you employ might be – give it the full one-hundred like you see & hear from Cornelius Wright & you’re bound to make an impact on listeners…and perhaps even leave a permanent scar in the process.  One way or the other, this is memorable stuff from CW, you feel me?  Check out what the man is capable of, and give his video for “It’s Dark And Hell Is Hot” a spin for yourself below!