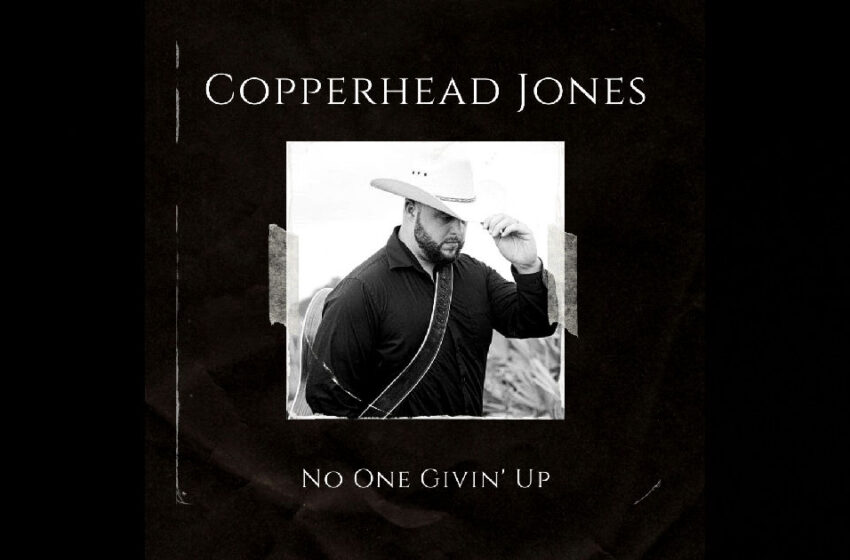 Well folks…I just wouldn’t be doin’ my job properly all these years if I didn’t end up with at least a couple of natural instincts to help guide me along the way…we all develop a sense of the way things really are in whatever it is we choose to do if we’re payin’ some attention, don’t we?  All I’m sayin’ is that, no – I wasn’t the least bit surprised to find Country music comin’ back at me through the speakers when I pushed play on these new singles by COPPERHEAD JONES.  Ironically, I’ve put that in all-caps when the point I’ve been making all along is that this dude pretty much has THE name-of-names when it comes to this genre – I was not expecting EDM, I was not expecting Metal, I was not expecting Hip-Hop – and nor would anyone in their right mind pushing play on an artist goin’ by the moniker of Copperhead Jones.  You know what you’re in-store for – you expect Country from a name like Copperhead Jones.

According to the legend of the man online, we learn that Copperhead has been technically writing tunes since about 2012 while he was serving in the US Navy (and thank-you for your service sir!) – but as I’m sure many of you understand, there’s a lot more to that time than just being able to sit around and write more songs.  Mr. Jones had a lot of life to be livin’ still – but he’s found his way to the spotlight at long last, and here we are, nearly a decade after he started honing his craft, he’s well on his way to a second career as a Country artist.  His debut single “No One Givin’ Up” came out at the tail end of last year in December, and he’s got his next one – “Where The Heart Will Always Be” set for release this February.

While I’ve always been upfront about the Country genre likely being the style of music I have the least amount of experience in still to this day, I’ve found my way to gain at least a lil’ knowledge throughout the years thanks to the many incredible artists & bands in our independent scene that have taught me a thing or two along the way.  I’m sure I know only a fraction of its entire history, even now after spending much more time listening to Country music and learning about it over this past decade here at our site, and of course, scores of summer trips over to my grandparent’s house where they’d constantly spin the classics.  All-in-all, it’s kind of given me this…overall experience that’s kind of like an understanding of where it started, a big ol’ gap in between with the exception of Cash & Nelson & Jones & whatnot, and a closer relationship to what’s out there now either here through the music we find, or what I see in shows or online clips etc. – and personally, I like how “No One Givin’ Up” was exactly as it was advertised to us within Copperhead’s bio online – this IS a track that “bridges the gap from traditional Nashville to Texas Red Dirt,” without question.  It’s not that it doesn’t have SOME of the flash & flair that modern-day Country comes with…you can still pick a little of that up on a single like “No One Givin’ Up,” sure – but that’s kind of part & parcel of a vibe that comes directly with what we know as single-worthy sound, you follow me?  A little flash & flair comes along with single-worthy tunes in every genre; it’s only natural – what I really LOVE about “No One Givin’ Up” is that it’s so far removed from the plastic & over-sensationalized flash & flair that comes along with 99% of today’s modern-Country tunes.  You listen to a dusty track like this, you hear the true grit in Copperhead’s vocals…you feel like you can taste the DIRT in your mouth as you listen, and the only way to solve the problem is gonna be a good ol’ bottle of the finest sarsaparilla.  Yessir…our hero Copperhead here is unafraid to be real with ya…and he’s got himself a stellar debut tune he can be proud of as a result.  Verse-wise, I think you get a decent performance from the guy that stands out strongly enough – but I think it’s also plenty clear that the more the power of the energy there is in the music, or the more the harmonies strengthen the sound around him, he’ll rise to the occasion and reveal his own highlights in those spots as well.  Most of which are found right there in the chorus in that regard, but you’ll find others in cleverly placed harmonies in the verses too.  Copperhead’s definitely capable…he’s got a tremendous voice…and I’d imagine that the more he continues to get on into the studio and puts more miles under his belt, the stronger everything’s gonna get.  Considering this is where it all starts, I think you gotta give the man real credit – he puts in an excellent performance on “No One Givin’ Up,” gives it lyrical depth and real weight to his words, and from the music to the microphone, he’s got a vibe with a serious edge that’s gripping, and keeps ya listening. 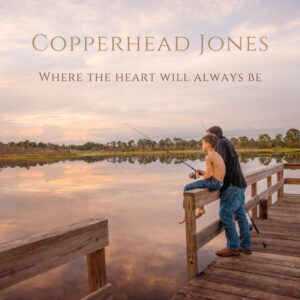 Ultimately, I can hear that Copperhead’s probably got himself a more accessible single coming out right around the corner with “Where The Heart Will Always Be” this February 11th.  I probably lean a bit more towards “No One Givin’ Up” on a personal level, but if we’re talkin’ about more universal sound overall, I’d say the brighter vibes and sweet nostalgia running through Copperhead’s first single of 2022 is bound to find its way easily to the hearts & minds out there.  “Where The Heart Will Always Be” is arguably a bit more of what you’d expect in a delicate Country tune and perhaps a little less of a song that you could tag directly to Copperhead Jones identity-wise…but there’s no arguin’ against a tune that’s well thought-out and well-played, which is what he’s got here for sure.  Bonus points for the fiddle work in this tune too…not only does it play a major role along the way as you listen, but you’ll even find a solo in the journey through this track as well – and I love how the guitar responds with its own short solo after that – my ears always appreciate that extra effort in adding in some real instrumentation beyond the ol’ verse & chorus.  Great tone, stellar clarity in the production…vocals and music all come out strong, and Copperhead gives you plenty of imagery in his words for you to see a song like this visually in your mind, like you’re flipping through an album of his old family pictures as you listen.  The hooks in the guitar-line that delivers the melody surrounding the verses & chorus might very well be the biggest one of’em all within this particular song…other than that, the rest comes out with real balance people will appreciate.  It’s shiny enough to warrant its single-worthy status…and I’m sure a whole bunch of y’all out there will have no problem at all connecting to the endearing sentiment you’ll find flowing throughout “Where The Heart Will Always Be” too…like I’ve been tellin’ ya, Copperhead seems to know exactly where he wants to take his sound & his music, finding that sweet spot right between the gritty and the beautiful.

It’s a good snapshot of what the man is capable of, that I can confirm – and I maintain, I think he’s just gonna get better from here on in if he’s startin’ out sounding this great already.  “No One Givin’ Up” gives you more tangible uniqueness that will have you remembering who Copperhead Jones is in terms of identity and his own sound, and “Where The Heart Will Always Be” dips a toe further in the pool shared by the mainstream, proving he could be just as successful in that realm of Country as well.  It’s all up to him from here of course…and time will tell which way he’ll go & what path he’ll choose to reach the success he’s seekin’ as more music comes out; but there ain’t no doubt about it, Jones is off to a great start, shows a ton of promise & potential, and is already pumpin’ out single-worthy tunes for sure.

Find out more about Copperhead Jones at his official website at:  https://www.copperheadjones.com

Tags: Copperhead Jones No One Givin’ Up Singles sleepingbagstudios Where The Heart Will Always Be