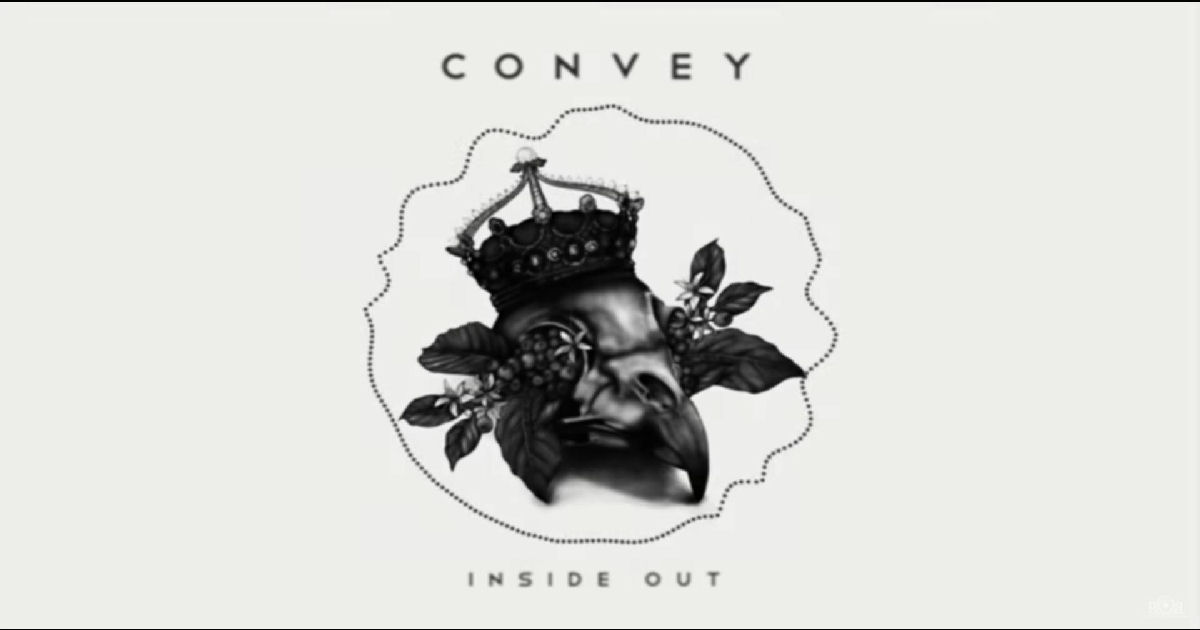 Convey – “Inside Out” – Single Review

I mean…I don’t wanna brag or anything…but guess which guy with two thumbs predicted that Convey would be back real soon with more new music for us after they released their last single “Terror” in October?  As it turns out, after much scanning of their social-media pages & whatnot…the LA-based band is nearing the official release of their highly-anticipated debut record.  To say I’m stoked about that would be to put it extremely mildly – Convey is without question one of the best bands you’ll find in the independent music-scene…and I’d imagine any day now they’ll be taking over the mainstream next.  Why?  Hell, pick a reason!  Tight musicianship, incredible songwriting, stunning vocals – music that has real LIFE in its veins and is endlessly creative, powerful, and seriously new to experience…my list for what could be appreciated & loved about the music of Convey could go on & on & on.  While my spidey-sense might put me slightly ahead of the rest for detecting the release of new music, when it comes to knowing just how good this band truly is…I know that’s no secret to damn near anyone anymore.  These guys are already well on their way to superstardom – you can literally tell just how much the people out there dig Convey from the endless streams of positive comments, love & support you see on their pages.

While some aspects of the band’s music like their impeccable timing & flawless precision are nearly a given at this point if you’ve listened to their previous Speed Dial EP…if you have, then you already know this isn’t the kind of band that’s ever going to drop the ball quality-wise, or idea-wise for that matter.  That being said…there’s definitely a noticeable difference in “Inside Out” that you’ll find might very well be unique from any of their other tunes – and that’s the degree of accessibility that this single has.  Don’t get me wrong – past releases like “Speed Dial” and even the most recent “Terror” are absolutely what I’d consider to be single-worthy tunes…but in this day & age, there’s a noteworthy difference between one of those and a verifiable, universally appealing hit song – and that’s totally what this is.  I’m not saying that with any kind of slight or connotation that would imply that Convey has sold out – that’s not what I’m saying here; quite the opposite really – I’m impressed with how they’ve essentially morphed what’s a completely fringe sound & style of music into something that everyone would love.  They’ve proven they can dig right into the dirt and the dark with their past material – this new song opens doors that would have been previously closed to Convey, allowing for even more possibilities & avenues for their success to follow.  And believe me…it IS coming…I dare say I’ve pretty much never been so sure about anything in my entire LIFE as I am when it comes down to my faith on whether or not Convey will make it out there – they’re the best kept secret in ALL of music right now…but as I mentioned at the beginning, word’s already getting out quickly and it ain’t gonna stay that way long.  Rightly so.  Just as they’ve done in the past, their attention to detail and killer sound remains at the highest level on “Inside Out” – the main change you’ll find in this tune from their past is truly how bold these hooks are and how catchy that rhythm & groove they find is; there’s zero doubt that the music still hits hard – but there’s an argument to be made that this might very well be the lighter-side of Convey.

Whether it was a purposeful move or not on behalf of the band to transform & shift their sound into more accessible territory on “Inside Out” will likely always be a mystery – as are many things with Convey.  I still don’t even know who’s exactly responsible for what even when it comes to their band – they make it easy on a reviewer like me with the fact that this band is built on four equal pillars of strength with Ben Cohen, Jahan Rajabi, Cory Massing, and Luke Dennis all completely crushing it all day, every day, every single time we hear them.  What I do know is this – whether intentional or not – you can’t hear that in the design, structure, or flow of “Inside Out” – it sounds every bit as organic and suited to Convey as anything else we’ve heard so far…if anything at all, perhaps they’re having a bit more fun in playing this tune – that might be something you very well can hear on this new single.  I can’t say that I’d blame them – everything about this rhythm, the hooks, and the dynamics of how they can push the limits of each moment by punctuating that energy through their cleverness in songwriting and top-notch execution…it all just sounds completely vibrant, alive, and massively fun for them to play personally.  All killer no filler from the entire Convey crew…expected quality-wise, but quite a surprise when it comes to how much there is for everyone to grab onto here…depending on how you go about gettin’ down – you might even dance to this cut.  For you longstanding fans from day one out there – don’t even fret, you’ll love this too and Convey’s still kept you in mind, providing wicked breakdowns, brilliant instrumentation, and really smart & subtle changes just like you love – check out the spot around 2:40 where they alter the melody just slightly once more before the song is over and draw out even more magic for ya.  Certainly no complaints from me – I honestly doubt there ever will be when it comes to the music of Convey.  Better still, I’d imagine you’ll all feel exactly the same way about’em as I do.

Their debut full-length album City Of Skin And Bone is set to be released in early 2019 – stay up to-date on the details and find out more about Convey from their official page at Facebook here:  https://www.facebook.com/ConveytheBand

Tags: Convey Inside Out Singles sleepingbagstudios