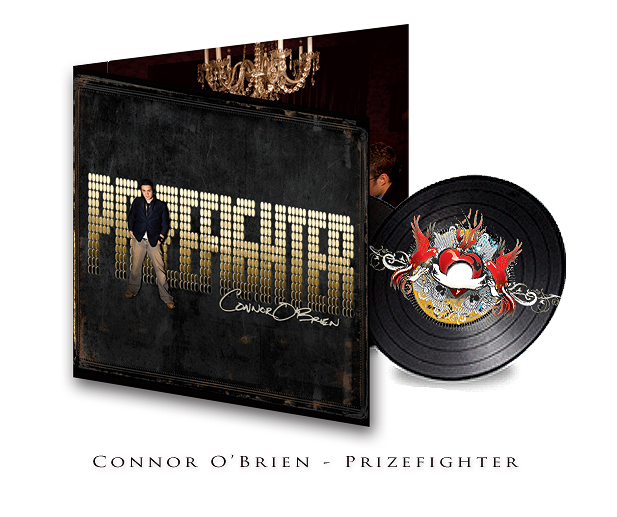 Connor, Connor, Connor…where do I start? You’ve thrown an absolute curveball into what has so far been a fantastic ride through genres I gravitate towards normally…describing yourself as pop-rock, my friend – you’re in my toughest and most critical category! I always feel like I’m a little tougher on both of those genres…I’ve found a tremendous amount of insincerity within that format over the past five years. Not being negative – just can’t make any promises my friend! Let’s see how this goes Connor – I’m pushing play on your new album Prizefighter…

Right off the drop I felt comfortable in listening to this. Not meant as an insult in any way whatsoever – but I instantly felt like after listening to the opening track “Make Ends Meet” that I knew what would come to follow in the songs to come. It opens with one of the most straight ahead (in the traditional, not boring sense) rock songs I’ve heard in years. It has all the elements: energy, structure, fantastic drumming and a huge hook. It has crystal clear guitars and a singer that at times resembles the younger, hungrier Bon Jovi.

Upon realizing that I got worried. Bon Jovi is nearly my antichrist. But despite being critical of the pop/rock genre – it IS a genre I truly love. Bands like the Gin Blossoms, Dishwalla, Better Than Ezra or even my favorite R.E.M. could all be considered part of that genre at one point or another. Was I going to have to throw my personal taste out the window for this album?

Thankfully no. I was instantly and totally surprised to hear the second track “Bobby And Me” take the music in a different direction – one that was certainly a lot closer to something like my Gin Blossoms reference. For myself – this track was the gateway into this album. From this point I became comfortable with what I was listening and certainly had a much clearer version of what Connor O’Brien was about…much clearer than my naïve first impression.

I started to realize that all of the elements of great songwriting are here. Now, I say that with some caution – because a lot of people can write fantastically, amazingly, perfect songs that annoy me to no end…but they’re still PERFECT. Like Nickelback. That kind of thing. I’m not ashamed to admit it – they write perfect songs too. But I digress…

Connor is delivering in the rock element every time with the song structure and the way he writes his music. It’s carefully planned, designed to bring out that energy…much like bands like Oleander did back in the early 2000’s. It delivers that boost of energy you need to get through traffic, or better yet – to hit that open road with. Listen to a track like “Customize” and realize that could just have easily been the summer rock song that you DID end up listening to all summer long.

He has learned and absorbed an incredible amount from listening to music over the years. I’m continually blown away at the quality of each and every composition and how they are perfectly placed each time. Doesn’t matter the style or tempo – listen to a track like “Falling To Pieces” – Connor can mix it up and play it slow. I also believe this is where his true strengths in songwriting show through the most.

That gift for writing a “hook” is something that will never be quite explained fully. Some people have it – some don’t. Connor does. “Falling To Pieces” leads directly into “Nothing At All” – a standout track that shows off Connor at his absolute best; this is pop/rock that sells itself and doesn’t need to be pushed on you. Melodic and well thought out – this track has that sincerity I’m looking for. You can hear clearly in this track that he believes in his material.

And that’s where I ended up. Of course I finished the album! I listened to “Reconcile” and “Inside Out (Acoustic)” multiple times! What I meant was that the conclusion I came to was that this album managed to maintain that element I need the most when listening to pop/rock – that intangible sound in a singer’s voice…that tone in a guitar…that rumble in a bass or thump in a drum that tells me the people creating these sounds BELIEVE in what they’re doing.

And after thorough listens through the album – I can tell you for sure, Connor believes in what he’s doing.

Listen to Connor O’Brien and support him at his pages at:
http://www.connorobrien.com