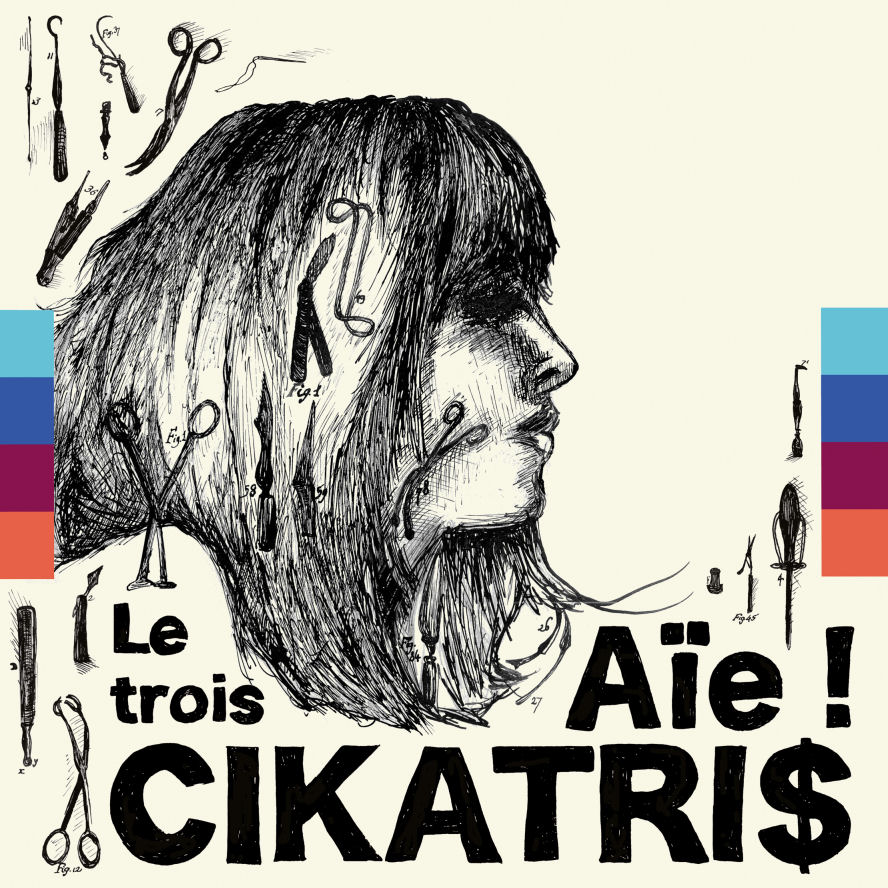 I want it on record that I was interested in the sound of Cikatri$ long before I ACTUALLY figured out what was taking place on the third track…and we’ll get to that in a moment or two here… Before that, I want to examine this new five-song EP all the way from Stockholm, Sweden piece by piece. Like I said – I was interested right from the get-go simply out of how different of an experience this was for my ears; it just happened to be the third track that pushed my interest over the edge into sheer wonder and amazement.

Understand that I’m doing my best here to catch what I can! It’s not often you come across an avant-garde, keytar-driven punk-band from Sweden that sings in French…or at least it’s a first for me. But my ears…dear readers…they still managed to pick up on quite a bit and have the most unreal & incredible audio-experience listening to Cikatri$. I’m not the only one either; this band has an extraordinary buzz coming from more than just their amplifiers – they’ll be featured at infamous SXSW in two official showcases this very March.

And with good reason! This music packs an incredible punch and really has a lasting impact. I’m not likely to forget having heard Cikatri$ like, EVER, in my life after this point – this is a memorable experience in sound for me. Much like ripping through the Stereolab catalog back in my day, this was an entirely new & welcome sound coming through my speakers introducing me into the world of artistic & chaotic punk music from Sweden with its French twist.

Starting with the absolutely-stellar “Quand me réveillerai-je?,” Cikatri$ gets to work quickly as they storm your ear-canals with a fully-bright punk sound that carries an extraordinary melody. Beautiful vocals in front of the driving beat that just become immaculate as the music graciously switches into an extraordinary assembly roughly every forty-five seconds in this short opening tune. Driving the magnificent beauty home right until the final moments – this first song takes such a massive turn towards melody that you simply won’t believe it’s still punk.

But it absolutely is. In behind those vocal melodies is viciously-played music and amplifiers under attack from these minstrels of mayhem. The second-cut, “Qui le fera?” comes out gunning and literally never lets up from its blazing speed and ends up being less than a minute and a half. Like what? I feel like I just listened to four full-songs by the time this one is done every time; the sound is HUGE and they really maximize the shit out of this one for its short-length by keeping that energy coming from all instruments and angles at every moment.

Track number three…as I mentioned…was something altogether unexpected. It’s a short little-ditty…and the first time it managed to fly by my eardrums without me actually catching WHAT I was listening to. “Tombée Amoureuse,” sung in French of course, is still unmistakably “Fell In Love With A Girl” by the White Stripes…and what an extraordinary cover. With an anti-punk, melodic & string-infused opening, this rendition begins subtly before exploding into a ferocious punk that would make Jack White grin with pride.

What I liked especially about that cover itself was that it indeed displayed the creativity and genius that drives the force of this extraordinary four-piece, and that it kind of kicked the next track back closer to that melodic-punk-pop-rock formula that worked so well in the opening tune. “Quand la Nuit Tombe sur Nous” was also the closest experience I’ve actually HAD to listening to anything that sounded close to Stereolab that wasn’t Stereolab; still punk in its attitude, their ability to texture their music with exterior & untypical sounds create a similar vibe but coupled with a raw & ferocious delivery.

With a final display of melodic-musical-fireworks, Cikatri$ blasts off their last tune on Aie ! le trois on “L’Espace.” This excellent finale comes out hard-hitting instantly with perhaps their fastest speed on the album. Once again the addition of external samples and sounds deliver something new for the ears while listening to the incredible guitar work, bass and drums all pounding away flawlessly in this psychedelic freak-out punk-jam. The switch & chorus on this last tune are perfection and sound perfect through the production & performance combined. Complete with horns and electro driving them towards the final moments in a musical-implosion, this EP is an audible indication of a band that is certain to kick ALL-the-ass from the live stage and an early notch in their belt of what is destined to be a creative adventure and career with longevity.

And check them out on tour this Spring/Summer at these fine places: