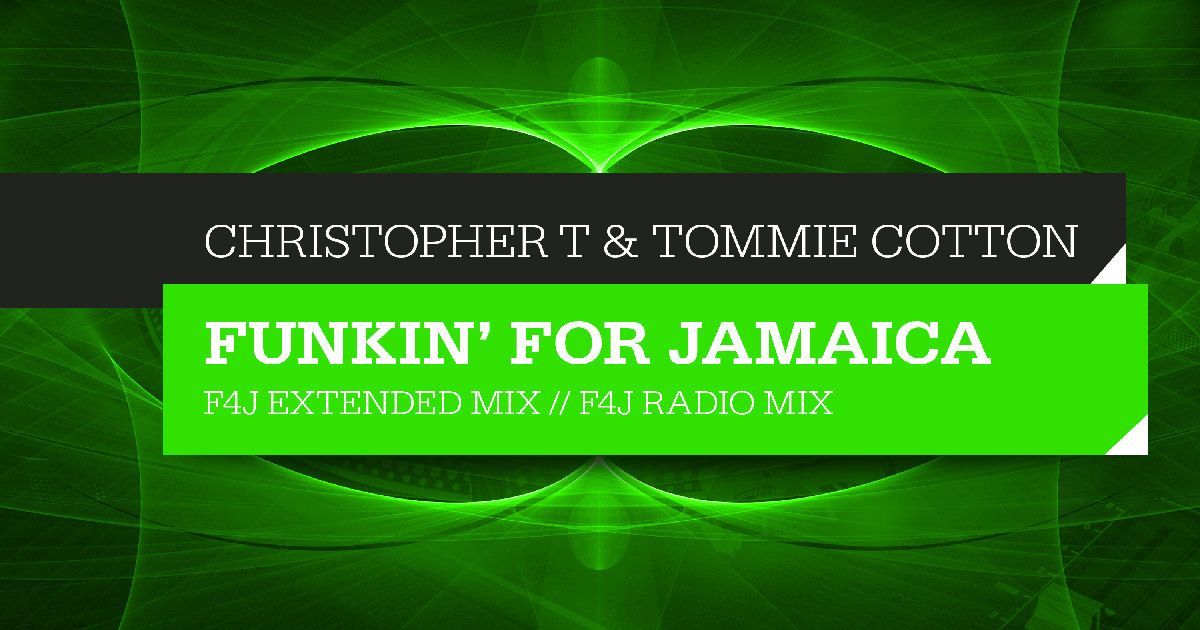 This new single/cover-tune from the collaboration between Christopher T & Tommie Cotton is the kind of song that makes it worth staying up at all hours to listen to something new.

“Funkin’ For Jamaica” was originally recorded by American Jazz Trumpter/Funkmaster Tom Browne.  I’m always continually amazed by cover-tunes; back in the day, you might choose to record one or two in an entire career – even with the digital recording advantages of the present-day, it’s not like the total number shoots up all that much, but there’s undoubtedly an increase per band/artist/project overall.  Regardless, it STILL comes down to being choosy and hearing something special in a song that you know can be adapted to your own particular style and that you can bring something to further the experience & expand the life of the song in a new direction.  In my opinion, there’s pretty much two ways to play it – you pick something well-known that’s basically already a hit before you even push record on a new cover because everyone loves the song, or you go with something lesser-known and attempt to add to a song’s lifespan and legacy…which is what I think Christopher T & Tommie Cotton are doing here.

But for real – respect to a real solid choice by these two to take this song on, Tom Browne has got some serious jams that need to be heard; the spirit and energy of the original runs wonderfully through their cover version.  You might even be able to make an argument that the enthusiasm here is even greater.

If I remember correctly, the last time I heard Christopher T & Tommie Cotton together on their track “Dance Floor Calls,” it was also the first time I had heard them collaborating together and not only did I give the song & effort the well-earned praise it deserved – but I believe I was also highly supportive of the idea that this team of two continue on.  Now of course I can’t take credit for that…but I can certainly say with resounding confidence that I’m completely glad they have.  They were great before and as I suspected, they’d become even greater over time – you just don’t get results like this on a recording without everyone involved being 100% into it, and that’s exactly what they are on “Funkin’ For Jamaica.”

Tommie takes on the lead vocals, which were once sung by Tonni Smith on the original – but she doesn’t stop there.  Instead, Tommie becomes a vocal army-of-one, taking on much of the background chatter from the Browne version and putting her own wildly enthusiastic spin on it.  Talk about taking the party straight to you!  She absolutely comes out storming with energy and sounds more confident than ever before.  Tommie’s already proven herself to be a completely capable singer, but I swear she’s taken it all to the next-level and really let herself loose in this performance.  Her voice is so incredibly powerful, spot-on for tone, filled with character and determination that is capable of stealing the spotlight any time she’s near a microphone.  She’s audible perfection with bold, soulful tones that work the funk & rhythm in the vocal-flow with exceptional professionalism that can’t help but stand out to the ears.

Supporting that incredible voice the entire way through, is Christopher T.  One would argue that you just couldn’t get the amazing performance you get from Tommie without the brilliant music that sets her up for success – and that person would be correct.  Let’s be real here – what Christopher T’s brought to “Funkin’ For Jamaica” is right on target, the mix, the production, the structure, the flow – it’s all there & all designed for maximum entertainment, allowing Tommie the freedom to really put the power into her vocals as a result of having so many vibrant dynamics to spring-off from as the music plays.  The enthusiasm & pure passion in the air between them comes through both the music and vocals perfectly and is 100% contagious; this song will leave you energized.  Christopher T has retained brilliant parts of the original song and put them right into the spotlight…those incredibly thick & funky bass-lines…the stunning trumpets…these elements bring that real charisma from Browne’s original into the music & combined with CT’s natural talent for creating exciting electro-mixes, this all comes out extraordinarily well with flawless transitions.  It’s almost like you can hear the effects of the positive space, environment and atmosphere they’re in creatively and as artists right now…like they’ve pushed themselves to become better versions of themselves so as not to let their team of two down.  Whatever their methods may be, they’re working.  In my humble opinion, their new single “Funkin’ For Jamaica” is as strong as steel.

You can enjoy the “Funkin’ For Jamaica” released in a ‘radio version’ and an even wilder, expanded ‘extended version’ officially on December 18th at all music platforms and you can get it even before that exclusively at Traxsource as of December 4th – either way, sounds like Christmas is coming early!

Find out more about Christopher T at:  https://www.facebook.com/ChristopherTMuzic/

Find out more about Tommie Cotton at:  https://www.facebook.com/tommiecottontunes

Find out more about the Lovely Drops record label at:  https://www.facebook.com/lovelydropsmuzic/