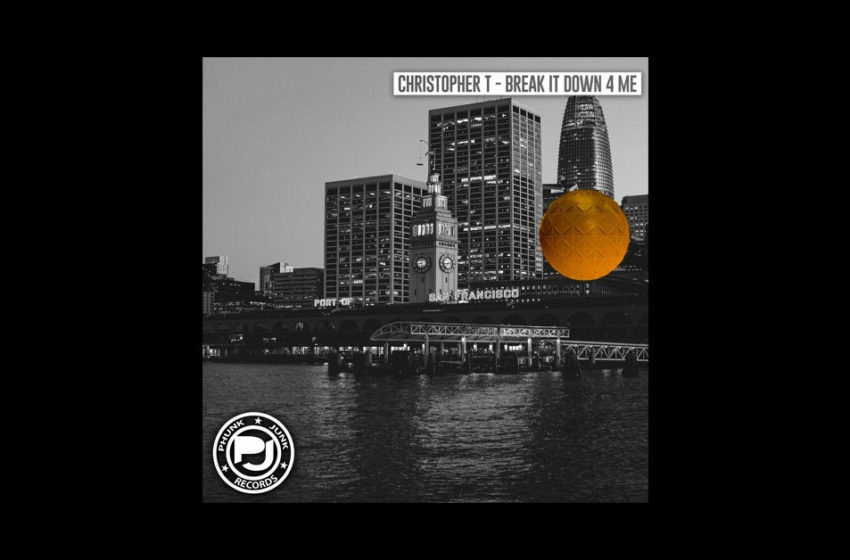 Christopher T Raises The Stakes With “Break It Down 4 Me” – New Single Available April 10th!

Back in action early on in 2020 with his powerfully stylistic sound on-point and an electrifying new single called “Break It Down 4 Me” designed to kick this year into gear, master mixologist Christopher T raises the stakes for the rest to follow with the cutting-edge party vibes he’s packed into his latest joint, 100%.

On the official release date of April 10th 2020, you’re officially invited to join in on the celebration!

Expertly creating a massively addictive rhythm through the clever infusion of his own vocals for the very first time, Christopher T reveals the true art of the transition as “Break It Down 4 Me” morphs and twists to deliver spectacular audio entertainment that surges right through you.  Flexing his professional touch & innate ability to captivate listeners through texture & tone, Christopher T’s newest jam brings serious fire to the speakers through straight-up stunning low-end grooves that demand attention from start to finish; the man is surging with Electro-energy that everyone can connect to this year.

Executing at an all-star level, the years of success in the scene have given Christopher T the experience, confidence, & skills required to thrive amongst his peers in the industry; now in 2020, he’s on a mission to take the sum total of his time spent making music & everything he’s learned to create his very best.  Released officially through Phunk Junk Records, “Break It Down 4 Me” is the first of a series of planned singles coming out from Christopher T this year – a true statement cut that shows the high-quality ideas and stunning definition found in the sound of one of House/Electro’s hardest working artists right now.

Maximizing every moment of “Break It Down 4 Me” and creating wildly dynamic results, Christopher T ensures that his latest material is always his best material; the brilliantly controlled versatility & all-out neon sound pouring out from the lefts to the rights reveals both his X-factor talent & adventurous style.  By designing music that speaks to him and appeals to YOU, Christopher T’s digitally-synthetic sound has a remarkably organic aesthetic that’s guaranteed to impress through seamless transitions & switches.  A shining example of the extraordinarily ambitious-yet-accessible songs he so flawlessly creates, “Break It Down 4 Me” is further confirmation that Christopher T has got what it takes to make music memorable.

Released as a split-single that features both the “Original Version” and “The Fresh Crew Remix” – this cut is heading straight for the club – and it’s guaranteed to take you right along with it!  The Fresh Crew sounds large & in-charge of an entire night’s worth of pure entertainment in the multitude of hooks found throughout “Break It Down 4 Me,” and there is absolutely no denying the incredible energy the spellbinding beat creates as the main star of the show cuts it up, flips the script, and sets the party off.  Supercharged with charisma and stocked with unforgettable moments that prove Christopher T is at the top of his game right now – “Break It Down 4 Me” is another highlight in his catalog that reveals he has the finesse of a veteran, with all the freshness and modern-day vibes that listeners truly want to hear.

He’s destined to take the top spot on charts & playlists around the globe with the insanely catchy beat and gripping hooks on “Break It Down 4 Me” – be sure to get yourself a copy of Christopher T’s latest single in 2020 and take this entire year to the next-level you deserve with this cut as your soundtrack.

Pre-save the latest single “Break It Down 4 Me” by Christopher T at Spotify:  https://smarturl.it/4mf5a6