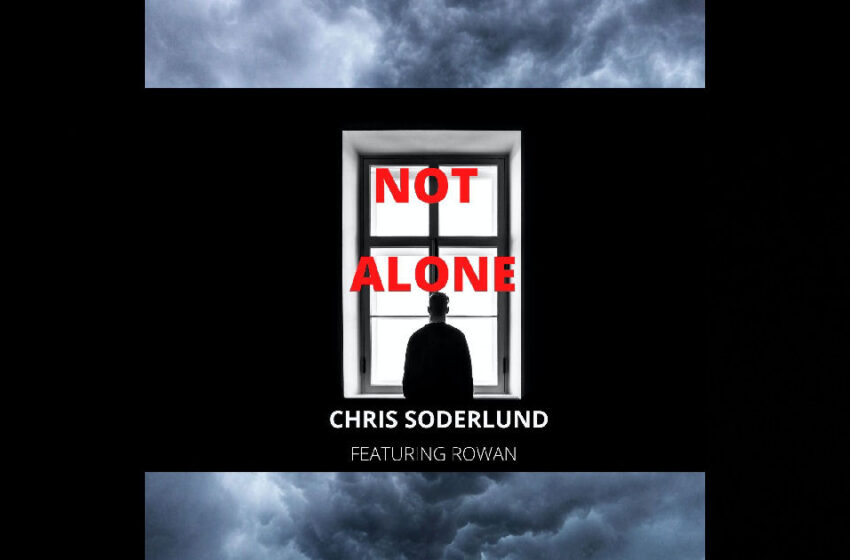 The way I see it mathematically, you could spend the next hour listening to your favorite Weezer record nearly twice in-full, or you could listen to this one debut single from Chris Soderlund featuring Rowan six times.  They’re not remotely comparable as far as sounds go – I just happen to use Weezer as my basic measurements for time in just about everything I do.  That being said, you can certainly infer that you’re in for quite a lengthy song when it comes to this first Soderlund single – it’s just shy of ten-minutes total!

So look…when it comes to length, the realities are what they are – I’m gonna be the LAST guy to get on Chris about doing anything he’s doing shorter than he’s doing it – you know how many times I’ve heard that myself throughout the years?  Our shows would be more ‘watchable’ or ‘listenable’ at three minutes in length as opposed to the hour or so they tend to run for – I’m not even disputing that kind of logic is true; I’m actively rebelling against it and you’re fully invited to join me.  I feel like Chris gets it.  Some people out there in this music scene we share are here to do things differently, create substantial art that lasts, and blaze a trail for themselves the way that they want to do it – and if you dig it, right on.  There’s always going to be room enough to squeeze another person or two onto the bandwagon somewhere…but if you’re the type looking for quick & flashy hooks & have that three-minute attention span that’s so often quoted as being the new normal…it might be best to move along & find some taste.  What I’m sayin’ is – we celebrate genuine effort & the artists/bands fully engaged in what they create here at these pages of ours…always have, always will – so if Chris & Rowan wanna rock for almost ten minutes on a debut tune, of course I’m here for that.  “Not Alone” is a really well-crafted and played cut that’s definitely got a solid chance of really finding an audience that appreciates such extraordinary effort.  I’m not saying that’s everyone – I hardly ever do no matter who I’m writing about to begin with; Chris & Rowan would know the odds are stacked hard against them with “Not Alone” from the get-go in taking on such a long song – but if you’re the type of person out there that really digs into songwriting & the craft itself, you’ll find plenty to love in this single, because the details are in everything you’ll hear.

In terms of sound/style, you’d be looking at comparisons that would probably put the influence of a song like “Not Alone” somewhere in the realm of the late 80s/early 90s, when ballad-rock was likely at its peak, and tunes of this length were so much more readily accepted by the masses.  On a structural level, and in regards to the composition – it’s essentially an absolutely flawless tune, and both Chris and Rowan should be extraordinarily proud of pulling off a song this large, this epic, and this ambitious without a hitch – they sound every bit as professional as professional can be.  Soderlund wears just about a million hats during this whole performance…from the concept to the writing, to the majority of the instruments you hear, to the mixing & production – this dude has got a serious gift, and no person with two functional ears, or even just one decent one, would dispute that based on all you’ll hear in this song.  He’s gonna get a ton of credit for how amazing those guitar solos stand out, and rightly so – the dude’s a highly capable & confident player and Chris is layin’ it down TIGHT for ya when that instrument takes the spotlight for a moment or two along the way.  Having said that, and in knowing that he’s responsible for pretty much everything you’ll hear outside of Rowan’s vocals, the steady bass from Melisa Dopazo, the strings of a five-piece perfectly played by just one person – Liz Lister, and the stellar drums from Britney Nicole Bowman.  I don’t want anyone out there missing just how truly spot-on Bowman’s drums are…I’m absolutely loving what she brings to this single…the essential atmosphere in the music surrounding those incredible guitars and vocals…like the warm synths, or string sounds from Liz, the sensational chorus-like backing vocals, the tender & endearing piano that starts this whole song to start with…there’s so much in this experience you can’t help but both listen and marvel at it at the very same time.  As for Rowan – what a fantastic pairing and what a remarkable voice!  When “Not Alone” started out…honestly, you could have told me that was Sarah McLachlan and I would have potentially believed it – and I’m Canadian!  Ultimately, she’ll take this song further towards the vibe of its Rock Ballad style as it plays on, but in those verses, you’ll find a complete dead ringer for McLachlan at times…and if that ain’t keepin’ world-class company, I don’t know what else could be – I felt like Rowan put in a truly noteworthy performance on “Not Alone” and found the versatility a single of this length requires for the dynamics it has.  You want that rise/fall in a great Rock Ballad, and you’ll find that here through the low-key approach to the verses, and how BIG the chorus sparks up with that inspired energy and the massive moments you wanna hear in both the vocals & music rising to the occasion.  In fact, I’d argue that Chris and Rowan more than rose to the occasion with “Not Alone” – they’re leapin’ tall buildings with a single bound superhero-style for a debut tune, and quite honestly, I think they exceed any expectations that the majority of any of us could ever have in seeing a debut cut with nearly ten-minutes about to come atcha.  In many cases, that’s a real brace yourselves moment, and careful what ya wish for type-thing – but not in this one; Chris and Rowan prove they’re the very definition of professional in the way they tackle this tune with such audible passion.  Personally, I love the fact that it would be extremely tough to choose any one element as THE standout over the others – that speaks volumes on behalf of the balance you’ll find here overall, believe that.  Every time I’m convinced it’s Rowan knocking it the furthest outta the park with her spectacular vocals, Chris will light up the fret-board right afterwards with a killer solo, and I’m sure he’s nailing it the hardest with his guitar – then I’d cycle through the song on repeat and fall in love with the piano and the way “Not Alone” begins, or find myself appreciating the insightful, evocative & thoughtful lyricism that comes along with this single as well…you get the point – like I was tellin’ ya, there’s lots to love here.

From the instrumentation to the vocals, “Not Alone” delivers a high-quality experience from the concept fueling the heart of the writing, mood, and sound, to the performance you’ll find from both Chris & Rowan making the most of every moment on a nearly TEN-MINUTE tune!  Did I mention this song’s length already?  I did?  Right.  You bet I did – and there’s been a reason the entire time that I’ve pointed it out.  Several!  We all get a choice when we create our music & art out there…we can go the easier route & we can try to pander to the masses…or we can make the music that genuinely reflects who we are on the inside & out…songs that have substance & truly matter to the people that are making them – like this one.  “Not Alone” is the kind of song that you can hear both Rowan and Chris are locked right into the moment, feelin’ it, and givin’ it everything they’ve got…and if it takes’em more time to express themselves in that regard, I’m all for it – because how can you argue against the results you hear in “Not Alone?”  I’m not even saying this from the perspective of the world’s biggest Rock Ballad fan, cause I wouldn’t tell ya that’s what I am – I dig some of’em for sure – and if they had the effort & detail that a song like this does, I’d probably dig a whole lot more of’em, you feel me?  From the opening melancholy of despair, to the uplifting sound of their resilience and triumphs in discovering they’re “Not Alone” – and that neither are YOU – they take you on an epic ride of emotional vibes & stunning professionalism in this commendable collaborative effort from the lefts to the rights.  A ton of talent on display from the music to the microphone – you gotta give credit where credit is due; no matter what you normally listen to, or what your regular jam is – when you hear true effort & passion combined with a message like this, it’s equally inspiring, comforting, and empowering.

Find out more about the music of Chris Soderlund at his official pages below!