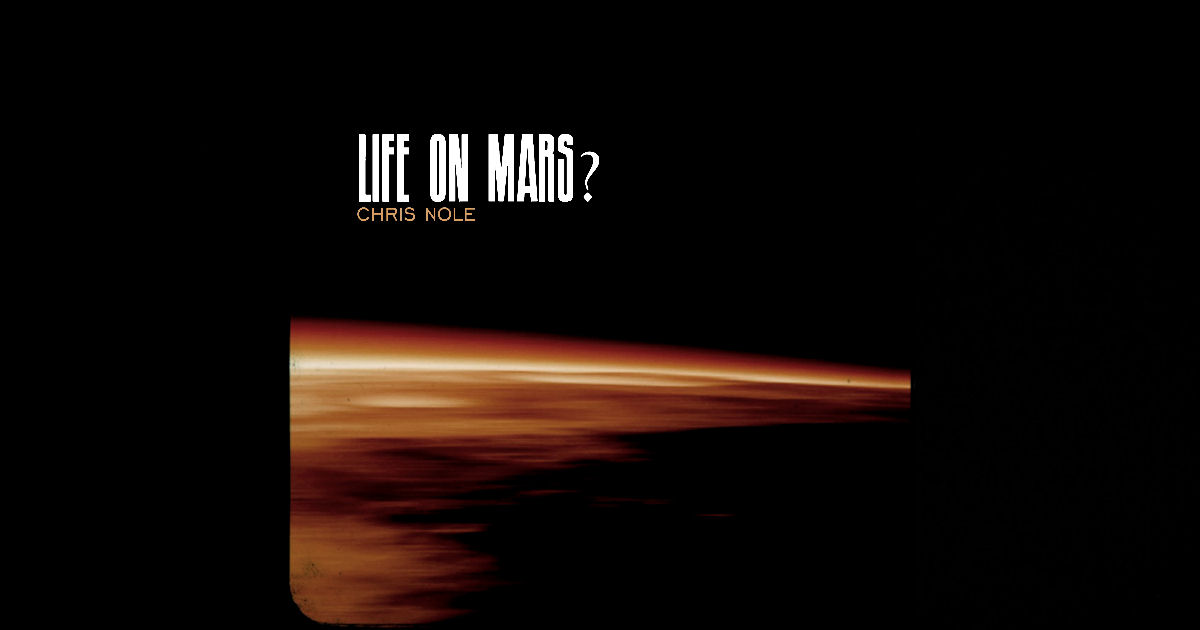 Well now…there’s a first time for everything!  I’m no stranger to Bowie covers by any stretch, but I’ll admit it’s the first time I’ve ever gotten a link to the original just in case I guess I hadn’t heard it?  You can never be too careful with these reviewers out there in the independent scene I tells ya.  Presumably, if it’s being sent out along with Chris Nole’s new piano cover of the massive Bowie megahit…then clearly someone out there DOES need it for reference.  But like…who?  Who hasn’t heard this classic before?

It’s hard to believe that it’s already the third anniversary of the Thin White Duke’s death…three years ago today in fact.  I try not to get too wrapped up in details like these…partly because people of all walks of life come & go all the time…but also partly because if I stop to reflect on the holes left behind, it can bring about tears real damn quick if I let it.  And so I move through music, like a shark, knowing that there’s personal peril awaiting me if I ever stop for too long before moving onto whatever’s next.  On a day like today though…no one can escape the gravity of one of our biggest star’s departures…I’m sure we all feel the absence of the likes of David Bowie & also how his spirit haunts our world of music now.

What gives Bowie that edge over just about every other artist that’s passed on from the beginning of time until now, is that he’ll go on to be one of the most covered and beloved by all universally, if he hasn’t already claimed that title too.  When you’re that enigmatic, inspiring, and courageous, a star with light that bright will continue to burn long, long after we even fully realize the source has been gone for quite some time already.  Bowie will be inspiring generations of musicians that haven’t even been born yet – that’s how amazing that guy truly was…and how truly amazing he and his music always will be.

And who better than to revitalize David’s music anew with a fresh perspective than Chris Nole?  I was highly impressed with his Melodies Of Grace EP back in April of last year and could definitely hear the extraordinary gift & connection he has with music all over that record.  Dude’s an incredible piano player with a sincere, natural, and wonderfully organic sound that’s stocked full of tremendous technique and a whole ton of heart in the way he plays.  Put it to you this way – I was excited just by the fact he’d taken this cover on, long before I’d even had a chance to hear his exquisite version myself yet; just knowing Chris was the right guy for the job was comforting – it was safe to assume this Bowie tune would have a proper tribute from a respectable player that understands the true specialness of the source material.

What I really love about this cover version is that Chris will take on the vocal pattern & melody with his piano rather than just dance around the perimeter of “Life On Mars” – I think that was a really wise choice that not only benefits this particular version, but also really enhances the beauty in this song.  For myself & I’m sure for many, “Life On Mars” is a staple favorite from the Bowie catalog…and like many of his tunes or that of a Cohen or Waits, you could always hear even more sweetness in the intentions & writing of his music as opposed to the finished results, which would often hint or imply, rather than simply expose the brilliant melody for all it could be worth.  Instead, a lot of listening to Bowie is always left for the listener to interpret…to know that, at any point, David could turn on that sweetness & charm and turn a melody into gold at sheer will.  In many cases, perhaps even including “Life On Mars,” Bowie always left something on the table like musical breadcrumbs for the rest of us to follow…to grab a piece of his idea and let that inspiration take us to a place of our own design, to further the story of a song, much like Chris does here.  With his graceful touch and feel for the piano, he’s done extraordinary justice to the Bowie original and played his way into a truly endearing tribute that makes an impact on our hearts & minds – he’s seriously done an absolutely wonderful job of mastering the expression in the melody and bringing that to the surface shining for all to hear on his version of “Life On Mars.”  You get that uplifting & empowering feeling that comes triumphantly radiating through the writing…and assuming you’re every bit as familiar with the words of the original as I am & everyone you know is – you’ll literally be able to hear each word in your head as Chris plays without him having to sing a single one of’em.  It’s all right there in the flowing piano notes, tones, and textures that combine to create the gorgeous atmosphere of “Life On Mars” – hands down one of the best Bowie tribute songs I’ve heard since he’s passed, and what a remarkable achievement considering it’s an instrumental.  He’s nailed the subtle charm, he’s excelled at the most melodically-intense moments and brought out the epic majesty in the original Bowie tune…what else can be said, truly?  Not a thing about this I’d change and I was more than happy to repeat this several times over, in awe really…I think this version is bold & beautiful enough to bring a genuine tear or two to your eyes through the emotional mix of joy, sadness, celebration, and heartfelt tribute.  Really well done Chris – I absolutely love this cover brother-man.

Find out more about Chris Nole’s music from his official website at:  https://chrisnole.com