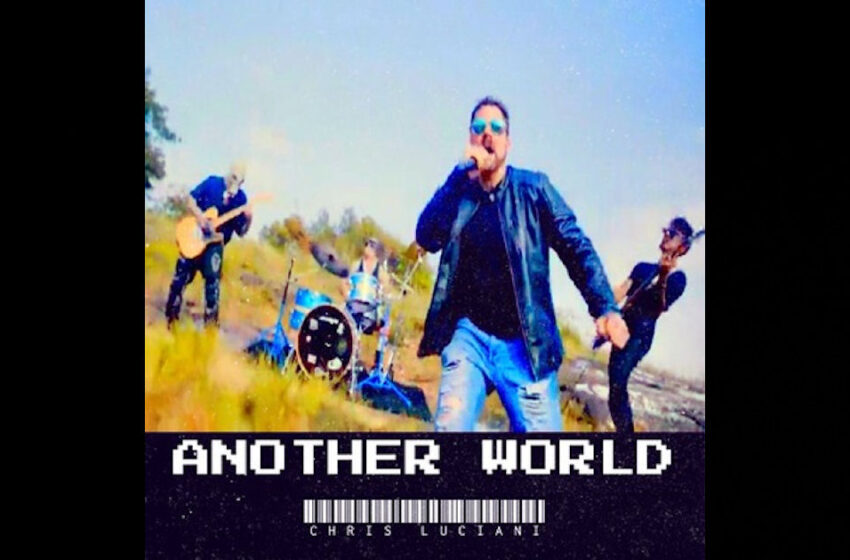 I’ll tell ya what nobody with hundreds of thousands of clicks & views on their latest single needs in this lifetime, and that’s confirmation from me.  What the heck could I tell Chris Luciani that would make a lick of difference after all the support & enthusiasm he’s generated from his debut solo track “Another World” from his upcoming album of the same name?  Seems to me like he’s doing just fine – this single has already racked up more hits at YouTube alone than pretty much the sum total of everything I’ve done over the past decade.  The answer to the question basically becomes a foregone conclusion after such impressive success has already been established…Chris don’t need me to tell him he’s done well.

For the most part, I get it – “Another World” is a well-played cut, and Chris clearly has something to say when it comes to the lyricism.  All-in-all, it’s probably a bit too push & pull for me personally in terms of its energy – after the intensity of the way it started out, to hear it get dialed back as far as it does for the verses honestly threw me a little bit.  I thought we’d be goin’ for one of those hard-then-harder type of tunes from the way it began, but like I said, there’s nearly a quarter million of you out there listening by the numbers at YouTube already, so who am I to judge?  Clearly you’re all loving it, so there ya have it.

To me, it sounds like “Another World” meets in the space between something like Rage Against The Machine and Ozzy Osbourne – which ain’t too bad when it comes to the Alt/Hard-Rock universe of sound I’d say.  Good company to be keeping, recognizable names with identifiable sounds you can hear in your mind without even having to click play on your playlists – Chris would certainly do well with the legions of fans all around the world that love both Ozzy and RATM.  I’m sure he’ll also do just fine with the existing fans of his band called LUCIDITY has well – this solo stuff you’re witnessing right now is apparently a side project he’s been workin’ on…and that’s always good news…it’s like twice the fun.

So…yeah…I mean…I’ll simply tell ya what the numbers will already confirm – it sounds good, it looks good…as to why Chris is wastin’ his time with little ol’ me and my site, that part remains a mystery.  The hardest of the hard parts of “Another World” are by far the most satisfying and exciting to my ears – the rest is certainly well-played, just perhaps not quite my thing as much.  That being said, it’s a genuine case of one half really needs the other in order for it to all be as dynamic as it is from each side of the coin…the hard-hitting parts wouldn’t come out as gripping as they do without the softer side of this song included, you feel me?  Great guitar ideas included in the way that “Another World” opens up as well – they play it all with supreme confidence, and Chris has got an exceptionally well-shot video to support this cut online as well.  Shouldn’t be too tough for the guy to get his solo side-project off the ground if this is the level of quality he plans on bringing to his latest endeavor…he’s already got people tuning-in from all around the world to check out what he’s been up to – and it’s pretty safe to say they’re gonna dig what they find here.  Everyone should feel safe about this really, right up to & including the guitar playin’ dude in the gas-mask…clearly that guy is ready for ANYTHING that could happen in “Another World,” or the one right here that he’s standing on underneath his feet!  It ends pretty abruptly I suppose – that might be the one semi-confusing aspect of this particular single…I’m not sure if they ran out of tape, out of hard-drive space, or ideas on how to tackle the ending, but it does feel like we’re almost cut short on this experience with how fast it wraps up.  Unique in that sense though…lord knows the last thing any of us need on our playlists is another ridiculously slow fade-out at the end of a song, so I’ll take the way “Another World” ends instead for sure.  Well sung, well played, and well conceived – Chris Luciani is off to a solid start with his solo career, and should have you Hard-Rock fans excited about where it’ll go from here.

Find out more about Chris Luciani from his page at Twitter here:  https://twitter.com/LucianiMusic