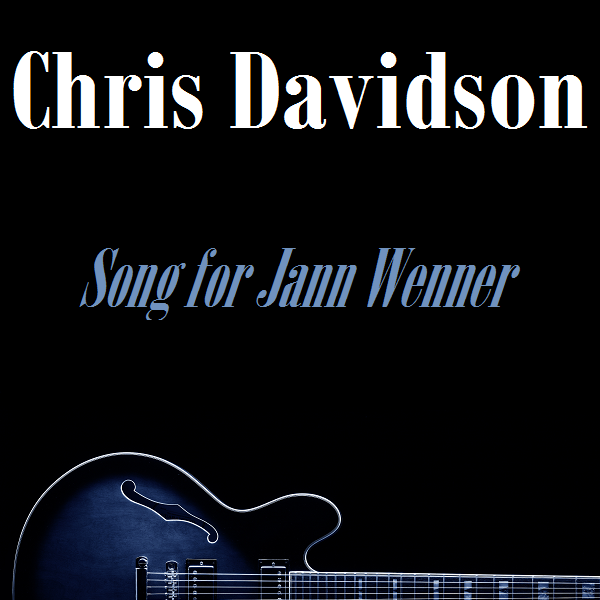 I mean…if there’s a better musical-appeal to get one’s music into the pages of Rolling Stone than writing a song called “Song For Jann Wenner” I’d be interested in hearing it – I don’t see how you could do much better than dedicating a track to the guy that helped start the entire magazine.

I wasn’t quite sure what I was going to be in for with a song like this.  For many of us, myself certainly included, Rolling Stone and the rock-stars that have lined its pages have been a staple of my diet throughout as long as I can personally remember…and the magazine’s history reaches back much further than my own personal age.  Chris Davidson cleverly examines the impact of the magazine, the stars between its cover and how music can define our lives.

Cleverly played and performed with bold contrast between the sound of the music and the content in the lyrics – Davidson shows the instincts of the great songwriters out there by combining an uplifting & inviting vibe to the music and incorporating a seriously heavy theme into the words.  I could definitely hear an argument for the potential theory that “Song For Jann Wenner” largely deals with death more than anything else through the lyrical content.  While that’s not necessarily untrue – it’s more inspired than that as Chris digs deep into the roots of the emotions that drive our admiration and love for the talented people that have entertained us throughout music’s history.  Truly…in my opinion…it’s much more of a tribute than any kind of morose expression – there’s sadness for sure…but the kind that makes you smile and acknowledge that YOU TOO were there for a part of the special history Davidson is singing about.

Is “Song For Jann Wenner” also inspired by what has been a horrific year out there for losing the talented stars of music to tragedy after tragedy?  Quite possibly.  Whether that’s a conscious or subconscious thing…not sure – but I’d be willing to bet the weight of the crushing news throughout 2016 from Bowie to Prince & unfortunately countless others has made an impact on this singer/songwriter and potentially driven him to create this tune.  As a person on the inside of the industry and paying attention to music all-day every-day – I certainly found a lot to relate to in the words Chris has written here.  I think he expresses the pain of goodbye really well…and still somehow manages to create something that really celebrates music overall at the same time.

And I wouldn’t necessarily call it a complete throwback…but it certainly has a classic sound to it.  Kind of like past-era of U2 meets Buddy Holly or Roy Orbison…I really loved the melody and tone to Chris’ voice in the verse and how it sounds so true to the songs of music’s past that best represent freedom and expression.  He’s got it recorded in a way that sounds like it’s been done live…pretty sure that’s all-studio, but I like the effect it has on the atmosphere he’s created.

It’s a song that really sums-up the soundtrack of our lives as best it can be put.  I think the words are strong, the emotion and passion are there and so is the rhythm, hook and pull.  While I think the elements of the music are strong, played-well and sound good – I also believe that this song’s best attributes are truly in its emotion and sentiment.  Chris has written a really sincere and timeless melody on “Song For Jann Wenner” and I think it’s the kind of message in music that will strongly resonate with people out there – it really makes you pause & think from the imagery in the words…because we all truly relate to what he’s singing about.

Have a listen to “Song For Jann Wenner” at his Spotify page:  https://open.spotify.com/album/3Jj6wa7JmlrKTldmFUv4hW