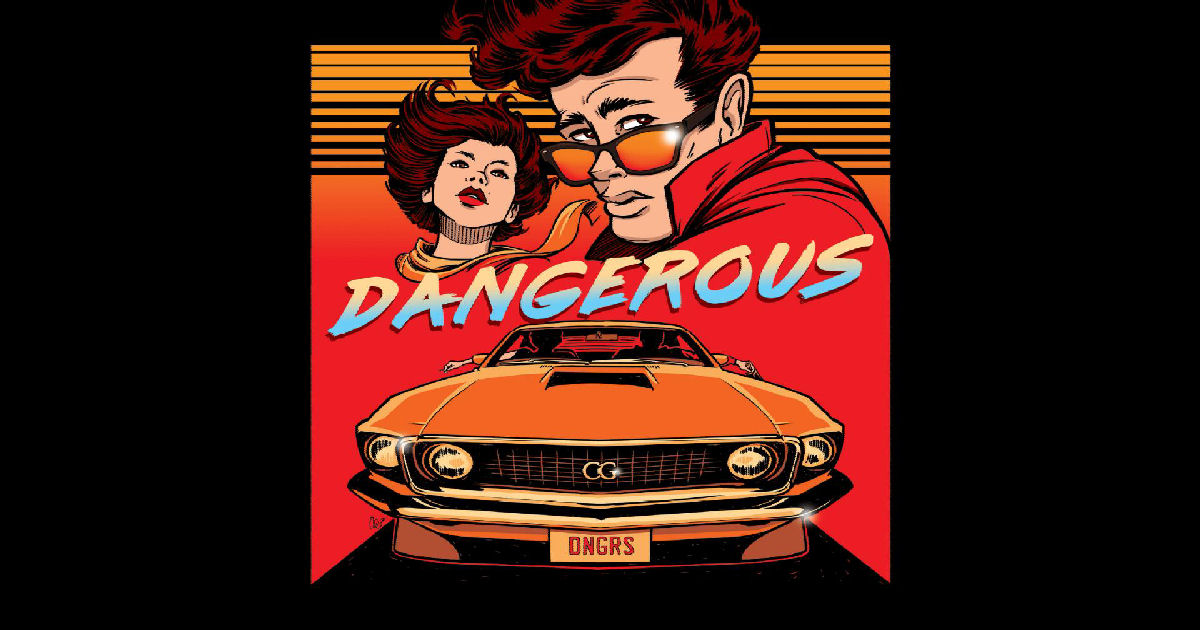 I’m really interested to hear what other people out there are thinking about this new debut EP from Chasing Giants…there’s an approach to music that this band is taking advantage of that could very well work in their favor – but make no mistake, as good as it has all come out…there IS still risk involved.

At the core of Chasing Giants are three musicians, Ben (Guitar), Maurice (Bass), and Jake (Drums) – their talents combined create truly wild, bright, and highly vibrant, colorful music that truly rocks a great beat no matter which track you’ll put on from the Dangerous EP.  I’ll put it to you this way in regards to what they’ve got going on musically – you’re not about to find any mistakes, missteps, or miscalculations here – these three absolutely know what they’re doing, and as a result, the music sounds fantastic each time.  If you’re scrutinizing this cast of characters and you’re listening to this record, you’ll notice one key ingredient missing from that list of credits involved in Chasing Giants – and this is what makes the key difference between them and many other bands you’ll ever listen to.

Someone will have to correct me if I’m wrong here – but it seems as if Chasing Giants have made the distinct CHOICE to not tie themselves down to any one particular singer for their songs.  I’m certainly not saying the idea of collaborating is a new thing, people are doing it all the time of course – but I would argue that not too many bands out there turn that into an official position and direction they want to pursue.  Face facts – 99% of the bands you listen to have one or two dedicated singers for the most part – and in every one of those scenarios, those members are generally a part of the band.  We can talk about featured guests and assistance from fantastic singers out there – but if you got vocals goin’ on in your band, chances are, it’s pretty fair to assume that it contains an in-house singer within, correct?

Chasing Giants, does not – and that makes for a wildly surprising ride through the Dangerous EP.

Through a rotating lineup of highly versatile, extremely talented voices, this band of three thrives on collaborations and uses a different singer, or singers, for each and every song of the four on their EP.  What the effect of that will be over time is unknown for now.  On the one hand, every guest star they’ve got on this record knocks it out of the park just as hard as the original members of Chasing Giants do – and of course on the other hand, there’s that pesky risk involved that I had mentioned early on…which is that it’s immeasurably harder to establish a full-on identity that people will recognize song after song.  Not saying impossible – I’m just saying, way, way, tougher to achieve.  That being said – I don’t know Chasing Giants…I can’t speak for what they WANT as a band, I can just tell you the reality of the situation and the choices being made.  If they WANT to continually bring something new to their music and add a certain layer of mystique surrounding what we might hear each and every time we hear them – then my hat’s completely off to this crew – you couldn’t possibly go about it any better than they are.

I would suspect that it’ll lead to a lot of water-cooler talk & debate over what worked best and what songs were people’s favorites…and as a result of swapping singers & the different styles they each bring to the mic, chances are a lot of what people will hear and connect with is going to be based on that.  No different than any other record on a fundamental level, we’re always going to have our favorites – what makes the situation different for Chasing Giants on a debut EP is that a lot of their choices in the future may likely be determined by the reaction to individual songs & singers.  They’ll learn quickly what works best and what might still need to be tweaked by how the people out there react to Dangerous.

And again…it’s not that I’m expecting the people not to be impressed, they WILL be…I’m just giving this crew some mental food-for-thought and stuff to consider for the future as they’re going forward.  Many of us will hear four fantastic songs on the Dangerous EP…and that same many of us might likely struggle at being able to identify Chasing Giants in the future…that’s the long-term effects of a rotating singer up front.  But if you listen to the title-track, “Dangerous” featuring the inspired & lively performances from Cheyenne and Madam Parker – it becomes pretty tough to worry on behalf of Chasing Giants when what you’ll hear is going so well for them.  I don’t know who brought the keyboards into the mix here – but that’s an essential part of the rhythm & groove here…a perfect complement to the bass-lines from Maurice and brightened guitar tones from Ben.  Complete with the crisp snap of the drumbeats from Jake – Chasing Giants undeniably sound smooth and right into their title-track, assisted brilliantly by Madam Parker & Cheyenne adding in spectacular amounts of personality, character, and talent in the vocal-department.  “Dangerous” shows the chops of the band musically, while still shining a bright spotlight on the featured guests…and all-in-all, they come out with extremely catchy hooks and a stomping beat that’ll pull you into this record quickly.

“Poison Berries” was one of the most interesting cuts on the record in my opinion…there’s a lot that I love about this tune and there’s also more on this one track that might have this tune with the odds stacked against them more than others.  First of all…I want it noted that Juliane Di Sisto gives one of the most confident and brilliant performances on this entire EP when it comes to her singing…she’s clearly aces and as good as it gets as a front-person.  The confidence and determined, focused tones of her vocals absolutely hit the mark as dead-on, precisely, and professionally as it gets; in my opinion, you couldn’t have asked any more from her on “Poison Berries.”  That being said…the writing of “Poison Berries,” or the resulting interpretation of the sound in collaboration…sits right on the fence of the modern-day era.  I mean if I’m being truthful, I hear a Taylor Dayne or even Pat Benetar kind of sound here in Juliane Di Sisto’s vocals…and at this point, both of those careers & sounds are of course, long behind them.  As to whether or not that style & approach is going to work out there for the people today…well…I still think there’s a lot of fans of that style of sound out there, but it is undeniably less common right now.  Does she OWN it?  Completely.  Confidence like this when it comes to vocals, counts for SO MUCH…and because she believes in the material, she’s bound to have you believing too.  Musically, Chasing Giants put you closer to the realm of something you might find in Maroon 5 – so don’t get me wrong, through their collaborative efforts, there IS an update on the sound in respect to the comparisons I’ve made…which…SHOULD be strong enough to pull them through this tune with successful support & accolades from the people out there.  The slight difference in this track from the rest on the Dangerous EP could very well work out for them in all kinds of positive directions; while there are certainly elements that harken back to an 80’s vibe at times – every time “Poison Berries” came on, I felt like I knew it more by heart whenever it came on.  That’s the result of having something that stands out for whatever reason it may be…you’ll notice “Poison Berries” because it really does jump out at ya.  Plus…what is that…a full brass section in there too?  There’s all kinds of life in the veins of “Poison Berries” & an energy in the song that is bound to snag the attention for one reason or the other.

“Till The Night Ends” features Maxine Champion and C Major in another exceptionally flashy & hook-laden cut on the Dangerous EP.  Even though each singer tends to bring something unique into the mix on each track, you have to admire the remarkable choices that Chasing Giants have made in terms of who is singing with the band…all of these singers are truly killer and add a ton of their own personality into the songs, which becomes crucial to what stands out to us.  The rhythmic way that Maxine and C Major slide the vibe into this song is essential on “Till The Night Ends.”  If we’re talking about the pure tone of the vocals…whichever singer is responsible for the verse around the one-minute mark – that’s my favorite voice on this whole record…I’m assuming that’s Maxine…she sounds INCREDIBLY smooth.  C Major brings it too…there’s no doubt about whether or not Chasing Giants have found the perfect singers for this cut, they most certainly have.  “Till The Night Ends” really goes for that pure vein of entertainment and strikes it rich here…the players in the band sound amped up and enthusiastic, resulting in one of the more uplifting cuts on the Dangerous EP in the way they pass on that excitement to you by proxy of listening.

Loved the way this record ends with “Bad News” – a definite highlight in the set and a great way to conclude the first experience with Chasing Giants on a high note.  Well…that is, plenty of high notes really – featured vocalist Ethan Conway takes you on a versatile trip through this final tune, flipping back and forth between his comfortable cadence & natural tones, to reaching for those high-up falsetto moments.  The sway of the music works insightfully well with the flow of the vocals…it’s like “Bad News” moves in a similar way to how we breathe – you can feel this melody move inside of ya.  Loved the pace set by Jake here, whose steady hand guides the beat of “Bad News.”  There are excellent guitar tones lacing this song’s sound from Ben once again, with a short-but-sweet highlight solo from him on “Bad News” before it ends – and the piano…whoever is responsible for that, has put in a real thoughtful elements into the melody, flow, and structure of this tune that become a massive part of the song’s most magical moments.  Smart backing vocals, powerful punch to the stop/start of the music, and as usual…a ton of crossover appeal and a widespread range of sound that roams explores the combination of R&B influences with a friendly & inviting Rock-edge to it.  Because make no mistake – Chasing Giants ARE here to rock…but their also ensuring through the hooks that you’ll be there to rock right along with them, the entire way through this record.

It’s a great ride that’s almost altogether too short – but that’s what the repeat function is for.  Doling out doses of high-quality tunes with tons of personality, charisma, and charm – Chasing Giants have got themselves a versatile & unique debut EP that will certainly go a long way in the effort to put this crew on the map.  How they navigate the waters from here will make their journey even more interesting – and my ears are certainly looking forward to hearing how the future shapes up for this crew from here.

Find out more about Chasing Giants from their official page at Facebook here:  https://www.facebook.com/ChasingGiantsOfficial/