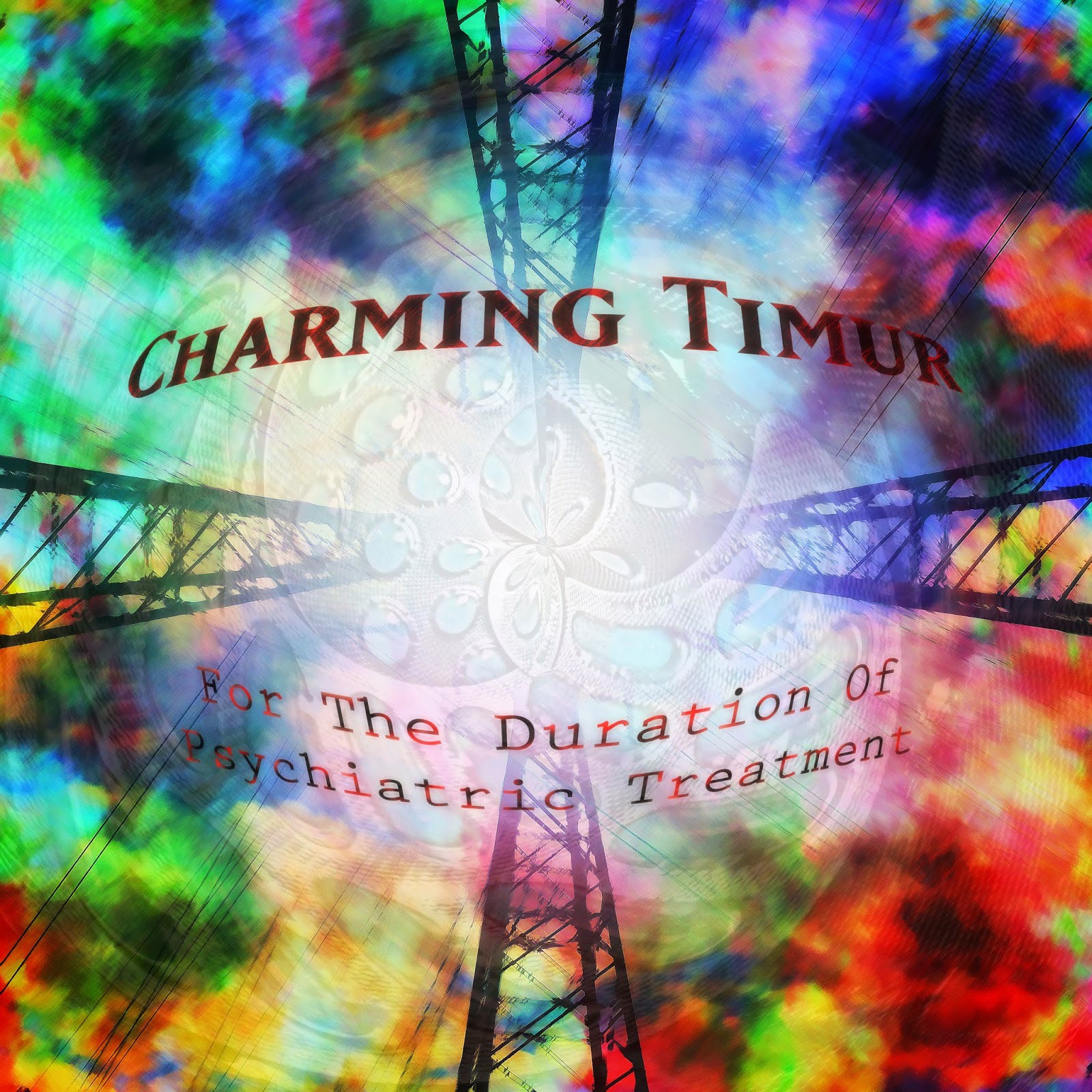 Charming Timur – For The Duration Of Psychiatric Treatment – Album Review

Right! Of course…it was a total mistake. As the first wall of relentless dark-metal sounds come blasting out of my speakers and Lohi begins his signature throat-tearing, tortured screams…if I hadn’t been just playing around in the first paragraph of this review, well I’d certainly be remembering Charming Timur by now! I was of course, only kidding around…it’d be impossible to forget the charismatic musical-mind behind this project and the extremities of the music in which he makes.

I do however…now have a hairless cat. She was asleep on the speakers when I pushed play on For The Duration Of Psychiatric Treatment…her own fault I figure…or maybe she’s choosing to make a fashion statement at a really coincidental & somewhat suspicious time.

I have mentioned this before in our dealings with Charming Timur, but I’ll say it again for those about to push that play-button…just make sure you proceed with caution. I can’t ever MAKE my wife go to bed…she’s a full-grown adult and can make that decision on her own quite well; but I can certainly recommend WHEN might be a good time to go for a nap or two. Keep in mind as I’ve also mentioned here many times…she really only listens to music being made by people that wear only sandals… As I was saying goodnight, I told her to make sure to close the door to the bedroom, because I was probably about to go and listen to the world’s LOUDEST album and that even with the volume on the lowest setting chances were that it would be blasting her out of bed.

Immediately validating all of these moves is Lohi as he comes out gunning in the opening track “Flanger Effects And Venlafaxine.” My point, is that it’s definitely not music for everyone…I know it, Lohi knows it…we’re both comfortable in that assessment I’m sure. The people that ‘get it,’ there’s more than enough room to climb aboard his bandwagon; the people that don’t…probably never will. My wife is in bed, probably dreaming sweet sandal, beaches and Jack Johnson dreams; I’m down here rocking the shit out of the studio late night with Santeri Lohi and his screaming metal combinations. Years ago myself, I wouldn’t have been able to handle this…I wasn’t ready to accept all sounds coming my way yet…couldn’t appreciate that brutal metal could have a beauty in it as well, just from the way it was made. As you all know…I believe there is something to like in everything we create. I might not LIKE it all – but there IS always something to like.

Take a track like “You Are Next,” the second song on the album. Now…even if you don’t LIKE this sound, I demand you appreciate it dammit! Lohi truly creates a wall of sound like no other. Musically, Charming Timur is massive in sound…just like I had anticipated and rushed my wife to bed over. This is a straight onslaught of sound coming at you, and the end is a maze of distorted fury and blood-curdling screams all delayed and crazily-mixed-up together. Awesome start into this follow up to the debut.

As “Armed For A Schoolday” starts…the subject matter is what you can derive from the title in one of the strongest tunes and straight-to-your-face tracks on this album. I love the lead guitar in this track…at times it nearly sounds like bagpipes…far away and drifting into the explosions to come. It also made me appreciate the two main-styles of which Lohi does the vocals; these are straight ahead him, with very little effects…and of course there’s the signature vibrato-heavy filters he uses on tracks like “You Are Next,” and “You Can’t Handle This (In A-Major).” Personally I prefer the straight ahead sound of his natural scream and tone, but I have to say he’s certainly adopted both of these sounds in an authentic way that is certainly recognizable on any playlist. There’s your argument right there; it’s definitely not a case of ‘all screaming music sounds the same’ bullshit – you could always tell a Charming Timur track when you hear it.

Slyly, Lohi has put a radio-single on here. In amongst the chaos of his own creations, the subtle-pop beat of “Fly With Me,” come out and tease you into believing that he won’t rage into another tirade through music. Admittedly, there’s no argument; this IS a lighter shade of Charming Timur…one that works for me extremely well. Lohi understands music, melody, chaos and structure…like the sounds or not, he makes no mistakes in what he does; every sound you’ll hear is something that is meant.

To bring it back to my point about his natural voice…well…what can I say…”Fly With Me” was where I found myself wishing he was using it rather than the filters. I GET IT Lohi! Don’t get me wrong dude! This is the song equivalent of Brad Pitt’s movie career; I’m so beautiful that I should find a way to make myself dirty as fuck. “Fly With Me,” could have gone the beautiful route; instead Lohi chooses to murk this up and add his haunting sound to it all.

I mean, like…C’MON GUY – can’t you let me just have it one time?

I really do think it’s an interesting choice he’s making. Clearly there’s talent for melody here – you can hear it prevalent again on “You Can’t Handle This (In A-Major),” even through his menacing whispers. That eternal struggle that exists between the violent nature of the music and his own journey to bring more melodic aspects to metal…it’s as if the very music he creates has beat him into submission, not allowing the ‘softer’ side of Lohi to truly break free from the dirt. I could be wrong about all this…but again, I think it’s an interesting subject to discuss with him…I’d like to see that melodic aspect of Charming Timur continue to thrive and develop. Despite all that is constantly going on in his music…I STILL think there’s room for it.

And besides…if there REALLY was a radio-single here, it’s more than likely “Had Enough.” This is a definite winner for metal fans. It’s dark, raw and hideously vengeful – you gotta love it! Put this on after a hard Monday at the office and punch the roof of your car all the way home…way cheaper than therapy. This is almost somewhat in the dark-depths of Stabbing Westward’s first album though…and I absolutely loved that band…again, a wicked incorporation of melody into their dark, electrified soundscapes and a singer that was equally as powerful as Lohi, albeit in a very different style.

If there’s one track I’ve looked forward to hearing come up over and over as I’ve repeated through this album, it’s “Close.” Here’s a track where the melody really DOES creep in through the music and again, I think he’s got a real winner here. It darkens up plenty from the lighter-tones of its beginning, but the melody remains a solid constant…I think this is the true evidence of an artist expanding their own boundaries and pushing themselves to the next level/refinement of their own sound.

“Illness” is another complete highlight; the atmosphere he’s created on this track is an audio-goldmine. Seriously, go get your headphones and strap in for a wild & brutal ride. This track is so far ‘removed’ from the mix…set back…distant; as if we’ve all been quarantined and they’ve left us to die…and these are the sounds we hear as our final moments come upon us. Combining this, alongside the epic & grand-scale nature of “A Human Cell,” this push towards the end is creating some extremely memorable moments. But it can’t just be me right Lohi? In comparison to A Brief Moment Of Existence…this IS the Charming Timur sound at a slightly tamer snarl is it not? Another spacious atmosphere on this track…I really dig the haunting vibes he’s able to create through his productions. I think the filter on his voice in this track largely works for him as the bend in the main line of the lyrical hook fits the music a little more consistently here. And welcome to his craziest breakdown yet! Did not see this one coming as it shrank to next to nothing but some synth and guitars (I think?) and the kick back in sounds like a determined grind to get this album to the finish line…like a real effort to push out the messages in this song and an extra ounce of emotion on display here.

Too funny, and case in point about the memorability of Lohi’s work in Charming Timur; I was JUST about to accuse Lohi of re-writing himself, or re-visiting something he’d done already through sound…and then I saw the brackets around “Our Day Is Beautiful (Second Mix),” implying that he HAD already been at this sound, which was a song featured on the debut album. A great decision to put a new mix on a great song from the previous album and it provides the impactful ending needed for an album like this. I KNEW I recognized that song! That’s how memorable his sounds truly are…but sfter all this incredibly explosive sound has come at me…you’ll have to forgive me if the ol’ brain feels a little more confused and scrambled than when I went into this.

Wait…what was I talking about again? I’m not sure if I can even think right now…where was I? Oh yeah!

I’m sure you get the picture now. Check out Charming Timur at the official page: http://charmingtimur.blogspot.ca/