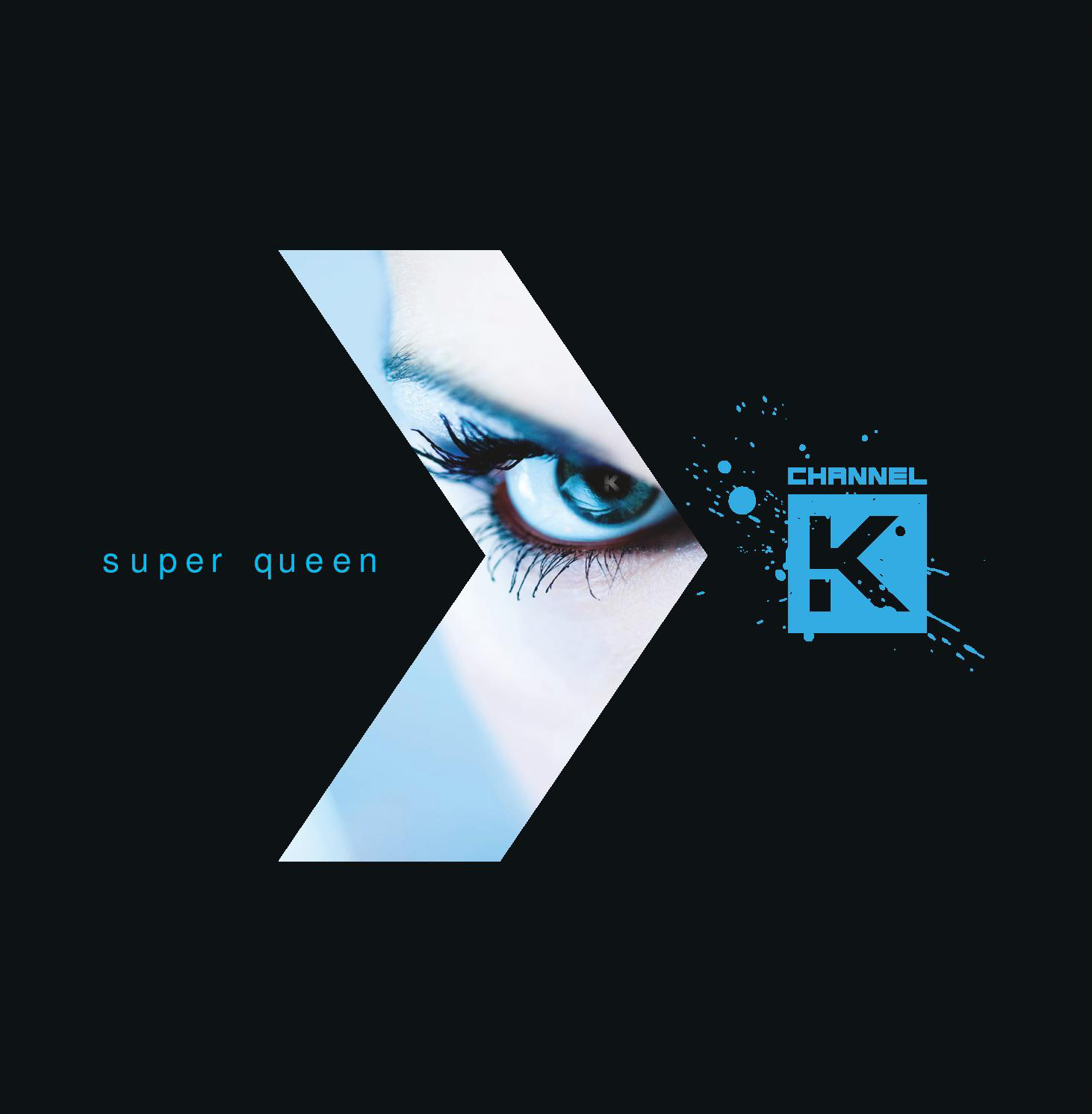 Alrighty then!  I like stuff like this…a different side of rock.  Channel K, based out of Houston, sounds like they burst onto the scene last year and have been found onstage playing live all over the place as they readied the material for their now-released Super Queen EP.  Debuts are always taken with a grain of salt here…I think it’s perfectly okay to have a few quirks here & there as long as you can hear the potential for what can happen over time, experience and longevity – and that the ideas themselves come across…that you hear the reasons to return later on & find out how the story continues on.  The five-piece band has four new tracks on the Super Queen EP that give you plenty of reasons to stay tuned to Channel K.

Closest example I might have to what you’ll hear in Channel K’s music would be to compare it to alt-indie bands like Echobelly, The Submarines, maybe even The Cardigans at times…a perfect example of other sounds that took a bit of getting used to before fully absorbing the awesomeness and never-ending potential for more awesomeness thereafter.  Channel K has that similarly confident & catchy, powerful approach to their music as well…and whether or not it all makes sense to us on a first impression or through repeat-listens, the five-pieces of Raul, Rock, Johnny, Ken and lead-singer Cyn never shy away from their material.  You can hear the commitment and conviction in the writing and performances…they really go after these songs and I’ve got a lot of love & respect for that.

What would make everything that much more confusing for Channel K would be trying to pick which one of these tunes would make for the best option as the lead-single…I think there’s a reasonable argument to be made for all of them.  “Super Queen” starts the record off in the right direction with heavy grooves in the baseline, smart accenting guitars & keyboards in the atmosphere and a steady beat keeping the pace for Cyn to work her charm & charisma into the mic.  You can hear the confidence grow throughout the song…starting in more cautionary tones, getting stronger in the bridge and unleashing the power in the chorus.  The breakdown around the three-minute mark has her locked into a stunning moment that works really well to showcase some of her smoothest tones quickly before departing into the solos and final chorus run-throughs to the end of the song.  I’ll say this…I like “Super Queen” – I think it could verifiably be one of those songs that a band would hear for themselves and question what it takes to get their ‘live sound’ on the recording…I think it does a good job of representing the band and what they’re all about, but I’d be lying to you if I didn’t say I heard the potential for this in a live setting to make even more of an impact than it might here.  Especially moments like the whispered ‘break-out’ moments in “Super Queen” right before they roar into the chorus, you know what I mean?  I don’t want anyone to think this opening tune doesn’t make the grade – I’m simply stating the case for this song being potentially even more of a riot in a concert, it’s got all the right ingredients.

The combination of bass and keyboards on the way into “Forbidden Misery” is sheer perfection.  Joined by the drums, guitars and vocals soon enough, this second tune really begins to open up and expand the horizons of where this project can go in the future.  “Super Queen” was written more for the alt-rock crowd…”Forbidden Misery” probably has a more widespread appeal through its ultra-smooth verse and could branch out to the pop/indie fringes and fans, pulling them all in as well.  If I’m going with my gut instincts…”Super Queen” is also more likely to be an instant hit with people…but I do firmly believe that “Forbidden Misery” speaks to a wider audience and also highlights the creativity in sound that Channel K puts into their music.  There’s a good chance that they’ve out-written the hooks in the chorus of “Forbidden Misery” with the strengths of the verses on this second tune…but that can work in a band’s favor just as much sometimes.  A hook is a hook, no matter where you find it in a fish or in a song.  Felt like at times the energy released in the chorus almost comes through a bit jagged in comparison to the smooth bass-lines, mood and atmosphere in the verse only moments before…and with the unique sound in the vocal-harmonies, there’s a good chance that some parts of the song will challenge acceptance just as much as the other parts will gain it from ears out there instantly.  Love the way that “Forbidden Misery” drifts out of the chorus and back into the verse, but conversely I can also definitely hear that the punch into the chorus might have somehow benefitted from a slight build-up or buffer between.  If you can imagine the sound of Kristin Hersh when she’s rocking out in Throwing Muses…that might be more of an apt comparison at Channel K’s most energetic moments of “Forbidden Misery,” I think the mix and approach to vocals comes out very similar in style and sound, especially in the chorus.  Personally I think Cyn nails the vocals in the verse perfectly…I think the entire sound from both the band and their singer really hits the mark and sounds their best in those lower-key & chilled out moments of the EP’s second tune.

Polarizing is never a bad thing to be though…and if you are, or your band is, so be it.  I maintain it’s better to have the people talking one way or the other than not saying anything at all, you dig?  I think it’s a track like “Moving On” from the Super Queen EP that ends up potentially revealing who’s really with them and who’s been on the fence.  I felt like “Moving On” reached out even further to the indie/alternative crowd than the songs before…and it also felt like where I *cough *cough *elbow *elbow made my way officially onto their side.  Personally, I think “Moving On” could very well be the strongest tune on the EP…but I can acknowledge that its beauty is definitely bizarre and anti-typical.  I can see a few potentially raised eyebrows wondering whether or not that chorus works for them – whereas other people like myself fully latch on to uniqueness like this.  A stunning combination of guitars, keyboards and bass-lines open “Moving On” perfectly once again…everyone in the band sounds comfortable and right at home while Cyn sings of heartbreak through the lyrics over top.  I want it to be known and VERY clear to you all – she’s nailing it here.  Whether you examine the smoother approach to the vocals on the verse, or the wild, imaginative and exotic sound that she brings to the chorus – she’s found intensely successful hooks in both key parts of “Moving On.”  She’s given herself a run for her own money here, I guarantee it – “Moving On” is not an easy song to sing and it’s right at the pinnacle points of her sweetness & tone in the chorus, but in my opinion, she got to every spot she wanted to perfectly.  Best way I can put it would be to those familiar with the bizarre catchiness you’d find in Limblifter’s music and harmonies…for me that’s completely my jam…for some it can drift almost too far towards art-rock to keep them fully engaged and I get that too.  It doesn’t happen to me personally, but I can get it.  Channel K in a sense, has that curse of being able to fit both everywhere and nowhere at the same time; their sound & style would make them a suitable candidate to play with just about any band out there…but when it comes to radio & promotion, there’s no doubt in my mind that the band is going to have it much tougher.  Thank the lord or your best friend the internet for being able to provide bands like this a home where the music still gets heard.  I think “Moving On” is a serious highlight on the Super Queen EP and highlights the very best of what Channel K brings to their sound and to music; this is different than the rest of what’s out there…to me, “Moving On” completely catches my attention and hints at the endless potential and creativity a band like this possesses.  Lyrically sound, the vocals are powerful at every moment on “Moving On” and match the energy & movement in the music insightfully.

Credit to the band for knowing their material and an extra shout-out to the way they’ve laid out the songs on the Super Queen EP.  They whet your appetite with the energetic rock of the title-track, move on to more meaty & deep material with “Forbidden Misery,” give you a real unique gem with “Moving On” and wrap up their record with a track built for everyone out there with “Temptation” at the end.  So…where to start on this final tune…”Temptation” is definitely out to please the ears…how about the immaculate jazz/funk influence on the all-out rock of this cut?  Because that certainly works.  The vocal-flow and melody?  Definitely a solid checkmark in the win column.  The hooks in both verse & chorus?  100% on-point and delivered with real passion you can audibly hear.  The backing vocals?  I cannot even begin to explain…I want SO MUCH MORE of this from Channel K!  The backing vocals of “Temptation” are off-the-charts cool…they sound closer to a band like Curve here and the free-flowing expression and confidence they carry absolutely fills the atmosphere spectacularly; it’s a smart addition to the song that becomes its heart, centerpiece and strongest set of hooks.  Though…instrumentation wise…you’ve really gotta give the rest of these guys behind her the credit they deserve as well; “Temptation” produces a serious highlight for the keyboards, the bass-lines NEVER quit in this band…and those guitars…THOSE GUITARS serve up an extraordinarily crunchy solo around the 2.5 minute mark that CANNOT be missed.  “Temptation” definitely takes on a more distinct alternative vibe as it plays on towards the Garbage & Curve-esque style & sound – but with the added moments of funked-out instrumentation that Channel K puts into this last cut, they manage once again to separate themselves from the rest with new ideas on how to innovate their music.

To sum it all up – Channel K has done a rock-solid job of arranging this EP and putting out a verifiably different sound to listen to.  I think the four tracks on the Super Queen EP start strongly and end on the strongest of notes, hinting at the limitless potential for where this band can take their sound to next.  There are polarizing moments and elements to the sound found throughout the record…but I really think that’s more than okay – I think that’s what shapes a band over time and leads them towards the success they’re looking to achieve with their music.  A band like Channel K can definitely reach the goals they have for themselves…they’re polymorphic in their sound and could literally expand and evolve their sound in any direction they choose; the ideas, skills & talent are all there and I think the more people hear Channel K, the more they’re going to love what they’ve got going on.

Find out more about Channel K from their official homepage at:  https://www.channelkmusic.com