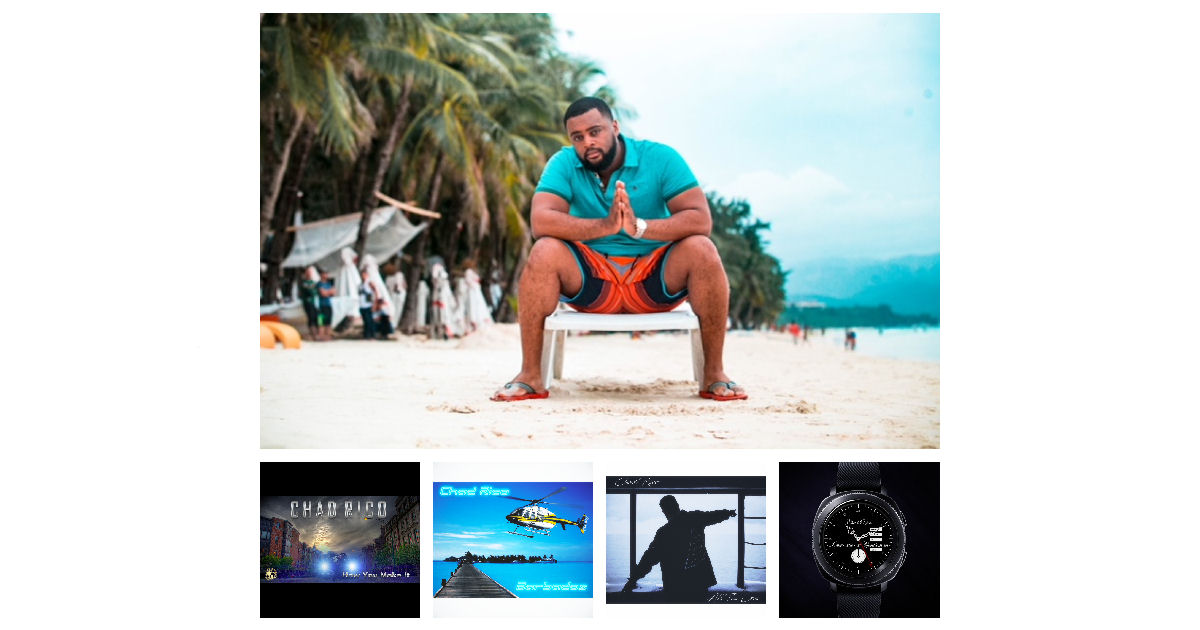 Doin’ my best here to get to the heart of what this artist is all about…seems like an artist built to deliver ya some good times this summer.  Ain’t gonna lie, I’ve got digital skips plaguing this advance streaming set of singles that’s making it a whole lot tougher to do that, but I’m still able to hear these tracks well enough to turn’em up.  So I’m on the hunt here a bit today…no lie, it’s taking a bit more effort with the interference doggin’ each of these tracks…but I can hear it’s just the streaming-aspect lettin’ these tunes down.  Our connection is fine on everything else, but for some reason, the internet sure hates me trying to listen to this set of four new singles from Chad Rico, no matter how much I might actually wanna myself.  And nothing will get you listening real closely either like having one singular file to play four tracks from, where they’re not even in the order of the list you’ve got in front of ya…that’s a truly fun game to play.  I think I’ve got this lineup correct at this point…what a start!  This is what I’ve got for ya…

“How You Make It” released back on the 12th of this month looks like…it either is continuing on the 12 Weeks Of Summer campaign towards his new record…or we might be in the middle of all that now…not 100% sure on that either really.  Chad’s got cuts on his main site…none of them are the songs I’ve got – so maybe we’re joining in at the middle of this venture, maybe they’re old tracks…I’m just workin’ with the information I’ve got y’all.  What I can tell ya is that there’s a new record indicated to be coming at some point in time soon enough, presumably with these songs & singles being released on it…and that I’m at least marginally sure of some of all this to be truthful.  “How You Make It” comes out with a relevant vibe for the right here & now and delivers a solid first impression (mine was different based on the order of the songs on this file, but this is what the people would hear first) that has Chad in the thick of some really big beats & big drama in the music as a result.  Definitely the kind of dynamics and shift in the chorus that makes a massive difference – there’s no doubt that every head turns to notice when he makes that move and gets the drums kickin’ alongside him like that.  Lots of twerkin’ goin’ on…that’s probably gonna be the main takeaway for many listeners out there & gets mentioned several times throughout “How You Make It” – but hey, summertime y’all – what better time than now to drop it down low on the dance-floor & do yo thang right?  “How You Make It” will gladly assist ya in doing that.

According to the notes I’ve got here, “Barbados” should be officially released today if this schedule’s on-point.  Flexing an international vibe on this second single, Chad jumps in the ol’ jet to start making moves on the map and gettin’ the summer started for real by visiting “Barbados” and planning his next stop from there.  I’ll say this…Chad’s working with modern-day Rap/Trap effects when it comes to the vocals…that’ll work for some…I’m probably more of a fan of his natural sound than the robotic-approach myself, but that’s likely an individual preference.  My main concern with the filters/effects/layers being used on a cut like “Barbados” is that it takes a ton of the Chad out of Chad’s music – you feel me?  Ain’t no doubt, it’s a style that can certainly sound cool at times – but there’s also no question it takes a ton of the identity out of an artist overall…and yeah, I’d argue that happens to him here a bit on “Barbados.”  All that being said, “Barbados” does come out with a vibrant sound & hooks that listeners will likely notice – the question just becomes whether or not they’d realize it was Chad Rico they were listening to.  Decent cut, don’t get me wrong – I’m just wondering if there’s enough here for people to tag Chad to it, or whether they’re bound to think it’s someone else they’ve heard, or possibly lump this track into the sea of sameness…”Barbados” has a lot of those good-good summer vibes you’re looking for, but it really is much harder to say as to whether or not Rico’s done enough with this single to set himself apart from the rest of what’s out there by comparison to the identity you’ll hear him rock in these surrounding cuts.

For what it’s worth, the set-list seems to get stronger as it plays on.  I felt like “How You Make It” was a good intro, “Barbados” was a decent tune, “All The Love” (July 26th) arguably adds a bit more relevance & strength to his sound – and he’ll finish on his strongest, most accessible cut, “International Gentleman (August 2nd).  “All The Love” has some of my favorite music from this set of singles for sure – and again, to his credit, Chad’s found a lot of great example of sounds that reflect that summertime vibes on all these tunes in distinctly different ways of their own, just like you’ll find he brings to this one.  He’s definitely locked-in to what’s happening out there in the Trap/Rap game right in the here & now, and there’s a good chance that because of that, he’ll be able to slide right onto a whole bunch of playlists as a result.  Identity can be the toughest thing for any artist/band to establish…it can take years & years, if it ever even comes at all; there’s still much room for Chad to grow in that respect.  Certainly ain’t nothing wrong with creating summertime cuts to bump on the way to the beach…but at the end of the day, you want the people knowing what the source was…Rico might struggle with this for a minute or two at first while he’s getting his sound/style established out there and in the studio, that’s facts.  Not denying that listeners are going to likely dig what they hear, just that they’re going to know it was Chad – that’s where the most work has to be put in still; to make sure that what Rico brings is what others can’t…to flex that uniqueness that’s going to stop people from doing whatever they’re doing, truly notice, and be like, that’s Chad Rico right there son…and I don’t move another box, answer the phone, or flip another burger til this song is over – you feelin’ me boss?  He’s capable – you can hear it in him.

“International Gentleman” was actually my first experience with Chad’s music – and in my opinion, the best one still without question.  With its lively trumpet-hooks and Kanye-like flow on the mic making an impact on ya – no doubt that Chad came out swinging big with this particular single, short as it may be.  What I loved most about this final cut, was that it really sounded inspired, sounded refreshing – “like Folgers, wakin’ up the game,” he’s sure to wake up a few playlists or more with this cut as well – it’s as entertaining as it is inviting to hear.  And like I’ve been tellin’ ya – this is the Chad Rico we want – this is the one that I could pick out of a lineup of singles and feel like I’d know who I was listening to for sure.  Or at the very least, if listeners got him confused with Ye, well hell, that’s a compliment when it comes to the Rap game & we all know it…so that certainly ain’t a bad thing for him either.  But we’re talking night & day here dear readers, dear friends…don’t get me wrong, the digital-skipping thing has definitely played a role in trying to assess these tunes as best I can and it can be truly exhausting to try & get through an experience like that – but hearing a track with the wild potential & pull of “International Gentleman” can make it all worthwhile.  To my ears, this is where the man is getting absolutely everything right – the music is off-the-charts cool, the swagger in his flow proves he’s got the verbal muscle & style to compete, and the way this whole song springs right out of your speakers ready for the summer will have you turning this track up loud’n’proud with zero hesitation.  I swear…it’s like natural instinct…”International Gentleman” comes on, my hand instantly reaches for the volume…because there’s no doubt – this is a track you’ll want a whole lot more of…more volume, more length, more repeat spins – and more of this in the future of Chad’s music for sure.  He flexes the most impressive of his skills, innovation, creativity, and fluidity to his flow in this final single – this cut’s got the spark, it’s got the juice, it’s got the perfect vibe, sound, and style to suit his strengths & get the most out of his potential & skillset…and hopefully that’ll be what the people remember most on their way to the beach this year and end up taking 12 Weeks Of Summer along with them as their official soundtrack this season.

Find out more about Chad Rico at his official website at:  https://www.chadrico.com