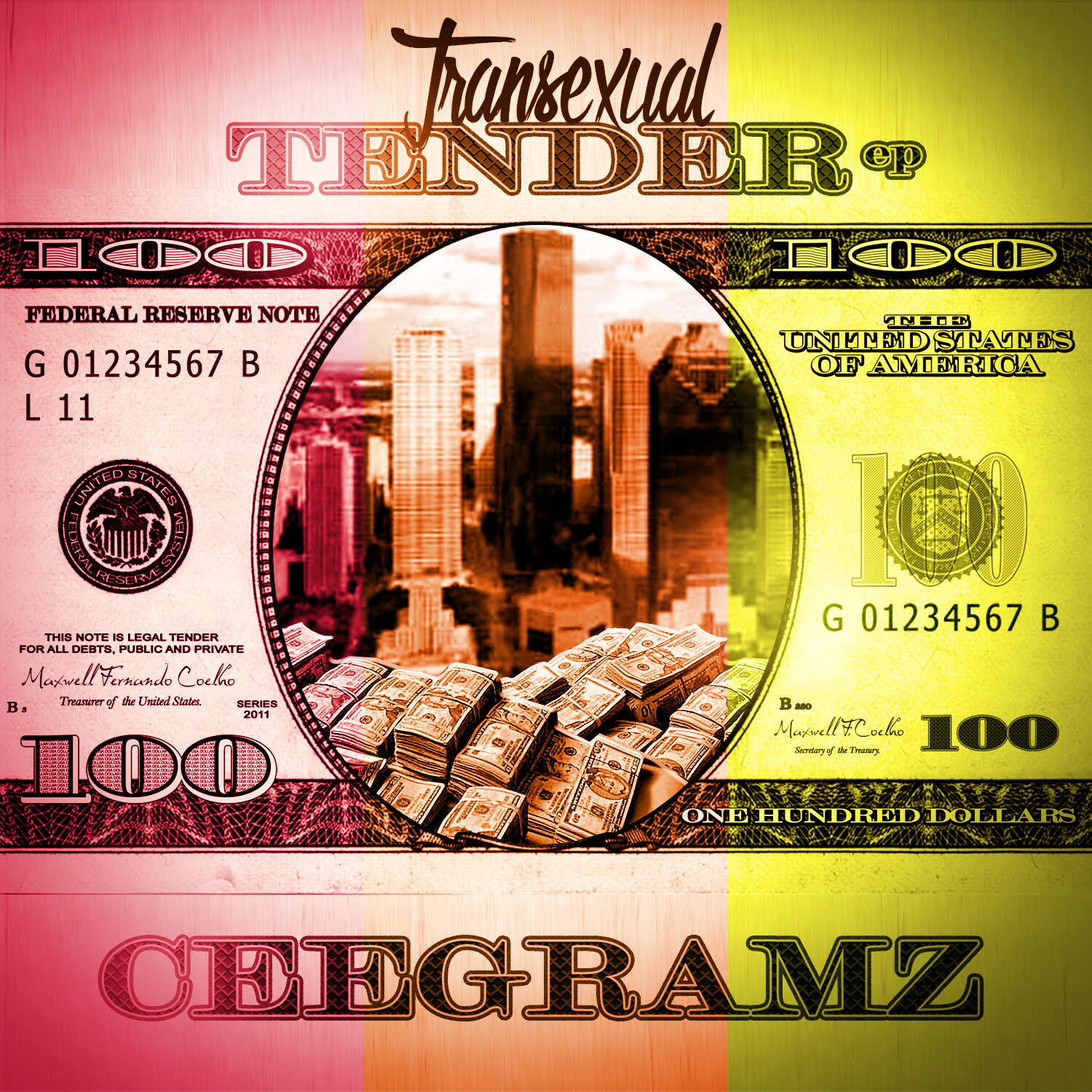 Rap can be such an incredible genre of music. I’d never be the guy to say it’s all I listen to every day, but it’s certainly been a part of my life since about the age of seven years old. Combine an intense early love of hip-hop with a whole shitload of summer-school for creative writing programs and you’ve got a young version of me looking to dissect the metering of emcees and feeling like I could judge if it was all lyrically on-point. I suppose I’m still that guy more or less…just crusty & bearded now…

Some things on the new EP from CeeGramz actually stood out quickly before I even pushed play on the music; one being the title of the EP itself, Transexual Tender. Interesting to me right off the bat – that’s not usually a topic you’ll find on many rap albums or EPs…so that caught my eye and attention, I became interested in how many of the new songs may/may not deal with the ‘trans’ subject. The other thing that I noticed instantly was that I’m definitely not the first person to discover the music of CeeGramz…this solo rapper is racking up listens and plays left, right and center – each of these four songs making up the Transexual Tender EP are nearing the 30k mark on the hit-count.

That’s impressive to say the least. Like I say to people discovering us at sleepingbagstudios for the first time – there has to be something being done right, all these people listening & following along can’t be related. So it seems, CeeGramz is attracting a lot of attention to Transexual Tender…but as much as numbers can impress…I’m also IN promotions and I know how numbers can be fickle, interpretive and sometimes fictional beasts…so let’s find out if there’s a justification for the amount of attention CeeGramz is garnering for his latest EP.

As it starts out with “Petty,” CeeGramz steps into a big theatrical sound with a dynamic mix, resembling Wiz Khalifa who got up on the wrong side of the bed and wants to lay out the anger and aggression rather than puff a blunt for once. From this opening tune, I’m a little at odds with the hook…I’m not sure if I dig the stretching out of the words to fit the metering; it’s the kind of lyrical stretch that feels like other words could have been added rather than draw them out. As far as the main verse is concerned, CeeGramz is mostly on a rampage against social media and haters in general…hating hate with hate in return. Logical? I honestly don’t know…on the one hand, the beat is decent – the overall flow might not be the world’s smoothest, but it’s extremely confident and delivered as such.

“She The Bae” has a way different subject lyrically – and this works well for CeeGramz. Not gonna lie to you, the opening cut feels a little forced to me…like a writer looking for a new topic but somewhat out of his element – but “She The Bae” drops the pretense and gives a much better insight into what a focused CeeGramz can be like without worrying as much about pop-culture or Facebook trolls. I mean, this is a sexy-ass, slow-but-intense love song! “She’s The Bae” moves at a late-night pulse…some real ‘draw the shades cause we got thangs to do’ kinda atmosphere.

That being said…there’s much more gangster in CeeGramz than there is gentleman. The following cut, “Replay Value” will definitely attest to that as it heads into the somewhat stereotypical nature of misogynistic rap, which has been done and done and done…and I think honestly many of us have become bored of the perspective and entirely moved on. Yet it remains a consistently dominant aspect in a lot of rap, both mainstream and independent…so I’m willing to buy into the idea that maybe there’s still a ton of people out there that relate to or dig on this style of lyricism…might just not be for me. And that’s not to say there’s nothing here for me – there is. I’d have to say that there is a humour element that runs throughout CeeGramz lyrics as well…and as serious as he may sound at points, some of the descriptions and ways he puts things can’t help but make you crack a smile. Cause don’t get me wrong – I’m all about freedom of speech – I just think it needs to be creative. CeeGramz at his most focused can bring out incredible descriptions and also match the energy in the music by giving the vocal performances real attitude and emphasis on all the right words. “Replay Value” has some of that through the verse, but I felt once again as if the chorus was almost a little too static & familiar and the track itself felt a little strained in the metering once again.

We’re not all here to break new ground and I get that…some of us just want to make music and perform to the best of our abilities. When you listen to the final cut on Transexual Tender called “Feline” you might find yourself wondering where this more daring and innovative but accessible artist has been throughout the other three tracks. Again, the last thing I’d ever say I am is politically correct…and I can’t deny just how much the lyrics of “Feline” make me crack up in the best of ways. The lyrical hook in the chorus is way too melodic, way too funny and way too good…like, as in, anyone singing this out loud around the house is going to find themselves in an awkward situation…but good luck in preventing that! This hook plunges in deep whether you’d like it to or not.

So…hmm…what do I think? I think there’s actually a potential lyrical mastermind of the low-dow & dirty here with CeeGramz…though I do think it needs a little more focus at times. Depending on how seriously he takes it all, there’s tons of potential to bring people in with his sharp wit and clever lyrics…his creativity can overcome any subject he chooses to take on and win people over with smart choices. It’ll be interesting to see this artist adapt and develop over time…right now I think CeeGramz is onto the start of a persona that could work in his favour – he just needs to make sure the next steps he takes are fully outside the ones laid down on the path before him to break through to the next level and stand out entirely from the rest.