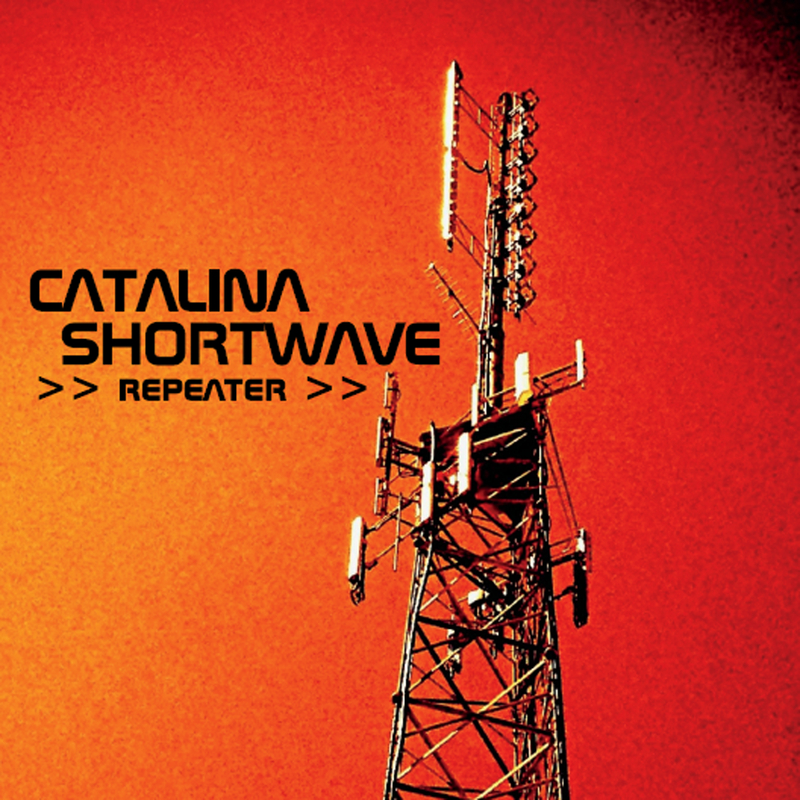 You know for a second there…I was sure I heard a guitar solo…but…this is a NEW album from Catalina Shortwave isn’t it? Instrumentation isn’t found on present-day records anymore is it? Surely I must have been hearing something else in the background…no…wait…there it is again! And again…and again!

That’s certainly always a defining factor for me on that first set of listens through any album that comes my way. I don’t mind if a sound has been done before, I don’t mind if each song is verse/chorus/verse…but show us a little something! A display of musical-chops is ALWAYS a good thing! Catalina Shortwave have aptly titled this new album Repeater; they WILL show you that special something on this album based in old-school rock, clever hooks and great instrumentation.

This is a rock album made literally for the dance-floor crowd. I don’t want to say “bar-band” but this album manages to bring that feel of your weekend nights right into this album, and you along with it. But for those of you brave enough to get your drink on and get out there on the floor have all felt the pain of that rock band playing the awkward songs you can’t quite dance to…another issue you won’t find here on Repeater. This is music you can completely visualize in a live context…these songs are designed for your maximum entertainment.

Songs like “Anne Boleyn,” and “Jennifer’s Paradise” make for great examples of Catalina’s capabilities. While the popped-up “Anne Boleyn” highlights the smart songwriting in this rock band with a song that could be translatable to all kinds of genres. A great pop/rock song in this one here, also giving you an early taste of the guitars from Brent Morton and Marty Stauffer early on into the album and the tasty crunch they put into the songs. John Garvey, drummer for Catalina Shortwave, definitely deserves some credit for the energy in this music – this guy is punishing skins back there! In a track like “Jennifer’s Paradise” you can hear the innovative rhythms he can bring into the music easily and really begin to understand just what a large role he must play in driving the music.

David Rizzo, the vocals…he’s going to make for an interesting discussion every time. Some people will hear this album and find he’s the perfect mix between David Lee Roth and Steven Tyler…some people will hear this & think he might be off his nut altogether…and there will be just as many that think he’s the perfect fit for the music of Catalina Shortwave. What I DO like a lot is the organic nature in Rizzo’s voice and that he’s unafraid to try new things and reach as far as he can as a songwriter. I love the duet going on in tracks “Apart,” and “Starstruck” another set of great pop/rock tunes…I’d have definitely wanted more of her, or this combo on the album, it works extremely well!

The issue that Catalina Shortwave will face of course, is that polarizing vocalist of theirs…but there’s truly two reasons as to WHY that will be. The one I’ve just explained, with some people thinking Rizzo is bang on and others feeling that contrast a bit too much – but the OTHER reason they’ll go through this is largely because of the production on this album and how it is made in that old-school traditional rock-mix. On the one hand it’s fantastic because it’s bright, it has energy, great instrumentation and songs written for huge crowds with memorable hooks to sing along to. On the other hand, because of that old-school feel to the album, this mix has Rizzo so far in front of the music that much of this album ends up resting on those shoulders of his.

Personally, I think he fits right in there as a sound to go with the music, and he writes smart lyrics that fit extremely well to these tunes…but to have him this far up front can at times make the music feel smaller than perhaps it should. There’s perfect instrumentation going on back there, but quite often it can feel like they’re all turned down in comparison to the mix on Rizzo. To be fair – show me an old-school rock album from the 70’s or 80’s that WASN’T made in this vein, and as much of Catalina Shortwave’s sound is based in that era…you kind of want to applaud them just as much for getting it all so close to the exact sounds of their influence through the production.

I’m interested in not only this album Repeater, but curious as to hear what Catalina Shortwave might do next as well. You can hear how well they gel together in tracks like “Running On Vapor,” “Set My Horses Free,” and “Wintersong” – it sounds like a band that is comfortable and confident in the music they’re making…and after listening to Repeater, you’ll hear it – Caatalina Shortwave does rock very well. But now that they’ve conquered that mountain…what they’ll do next in the future could be anything at all!

Check out Catalina Shortwave at their official page at: http://www.catalinashortwave.com/