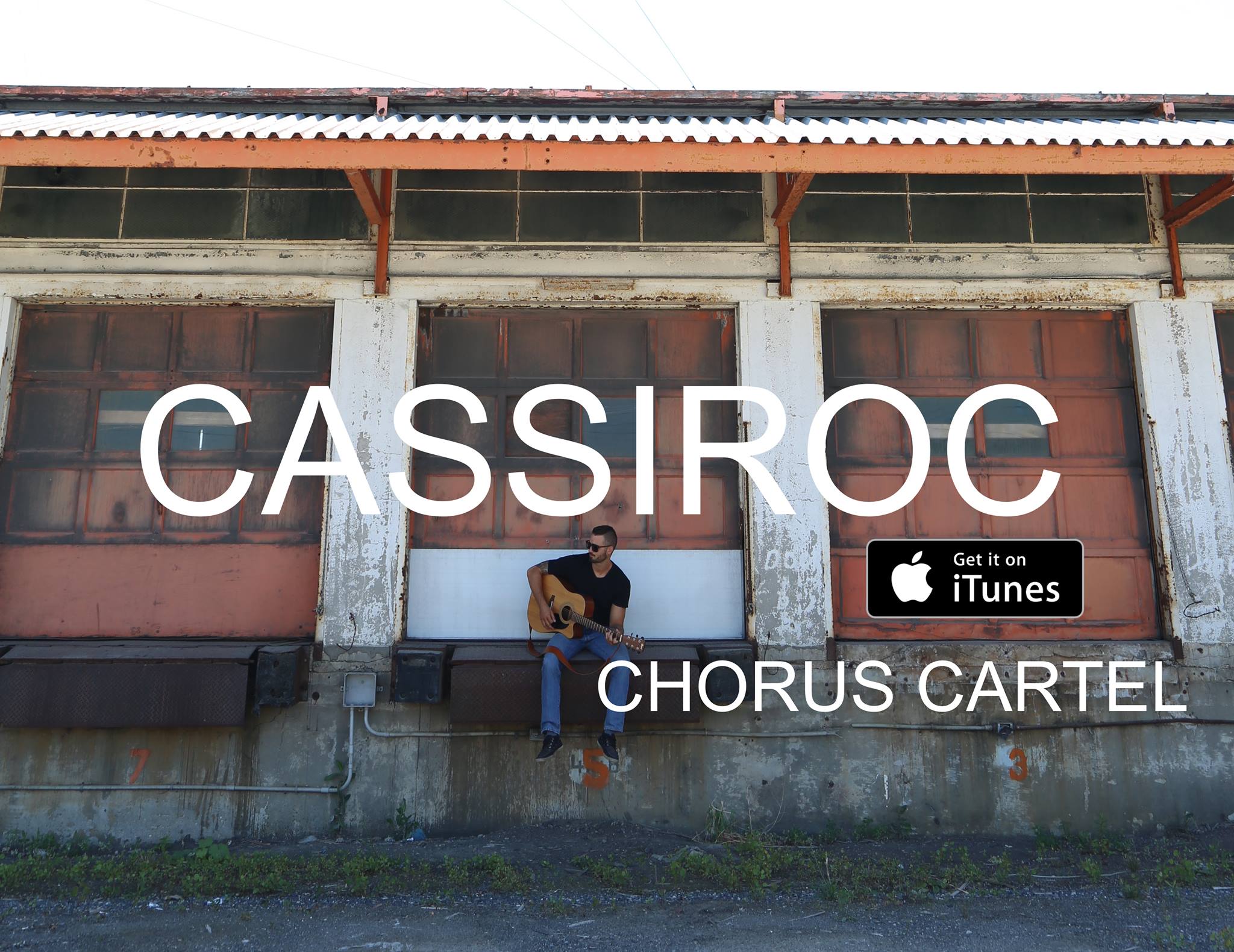 Looks like we’ve got an artist from right here in local Ontario…right from the musical-heart of it all in Toronto – Cassiroc.  Certainly on the different side of the scale…this one-man electronic pop/rock project combines captivating ideas and an original sound that roams through an insightful amount of musical-terrain and ventures into different styles, atmospheres and moods.  Generally speaking – there’s always a tendency to play favorites when hearing a mix of music as diverse as this is from track-to-track…some songs and styles are bound to resonate more strongly with you than others…that’s natural.  That being said…I found strong ideas all over these songs and enjoyable entertainment throughout the Chorus Cartel album.  I can still hear some newness to this artist and some searching for the path he wants to truly define himself on…but I can also hear this is a solid-start to a potentially lengthy and adventurous career in the experience of sound.

When he’s at his most focused, Cassiroc creates melodies and songs you can’t possibly ignore…when he drifts slightly from that focus, the ideas still come through strongly even if the mix could potentially serve the music and songs better at times.  For the record…I’m going from the list I found at the Bandcamp site as opposed to other places online…I think this is the intended lineup of the songs and I’m choosing to go with that…you know, so you can follow along.  I started the Chorus Cartel album with a genius song called “10 Feet Tall” – and I was pretty much hooked on this track from the moment it started.  Cassiroc displays an insightful amount of heart and emotion in this melody…the reverb-laden layers of vocals work well in his favor, the slight-beat of the percussion and the guitar rhythms all come out strongly.  There’s a lo-fi element of the recording that makes this one sound a little more intimate and special to me than some of the other tracks did…and overall, I think “10 Feet Tall” is a fantastic start to the album and perfect first experience with Cassiroc’s music.

Hard to say 100% but from what I can see from the hit-count on these songs from Cassiroc, I’m guessing that he’s promoting the second tune, “Making Life” as the current single.  Personally…I’m a little bit tossed up on this tune – though I’d certainly argue that it’s perhaps a stronger representation of the style and sound that Cassiroc is most prone to explore.  In terms of a single…it’s always better to draw people in with a choice like “Making Life” that will make sense to people when listening to the rest of the material…by contrast, it’ll be a bit of a shock with “10 Feet Tall” starting the record, but overall – this is closer to the authentic-style and unique ideas of Cassiroc on display throughout the album’s second tune.  Personally…I felt like the piano-line/main-line-electro was a little too bright in the mix and dominated a lot of the other beautiful parts of this song too much.  I like the auto-tuned vocals, but they were enveloped in the repetitive mayhem of the other parts in the music…mix-wise, I felt like it cost the idea slightly on “Making Life” from standing out in parts along the way and rather than punching up the definition, it sounds like it succumbs to the idea that it’s all one big idea and blended together.

I felt like “Night Life City Cruise” still suffered from that a little…but you can hear a bit more definition to each part as they play here.  I like the chillness of the atmosphere…but at the same time, I’m worried about “Making Life” and “Night Life City Cruise” back-to-back this close to the beginning of the record.  All the energy is out of the music at this point…and that somewhat pigeonholes the playlists you’ll find Cassiroc becoming a part of, know what I mean?  I thought the vocals were mixed-in better into “Night Life City Cruise” and I really dig the performance and melody.  I felt like the music’s main-hook, which is a tiny piece of synth-electro, really could have been explored and incorporated more into the song to make it stand-out a little more.  Essentially, the parts are all well-delivered and performed by the writing falls a bit flat here in terms of any hooks…they’re still there but much harder to get to and absorb for the average listener.

“Slick Cars And Diamond Rings” definitely belongs with the set of three that started in the progression from “Making Life” onwards…but I think that Cassiroc has his best-realized version of this idea on display here.  With a more R&B/soulful approach to the vocal-flow, I thought he sounded great on this cut.  Musically, “Slick Cars And Diamond Rings” wanders around a lot but always stays on time with the incorporation of new elements in the music along the way.  Do they all sound like they belong together?  Not all the time honestly…but somehow, Cassiroc has made this one work overall.  I think the atmosphere of “Slick Cars And Diamond Rings” brings out the best in the set of slow-emotional-electro songs he’s put into the beginning of this record.

And wouldn’t you know it…just by the time I thought it all came out right, Cassiroc turns left sharply for the folk-indie sound of “Save Your Luck For Someone Else.”  So…hmmm…okay…let’s see…what would I say about this cut…it’s tricky.  I resist and rail-against anything that sounds like a standard blues-riff…and there’s no denying that the guitar-work on “Save Your Luck For Someone Else” has an element of that…but with it all muted and the diversity of the chorus and overall sound – I seemed to find a way to forgive and accept this tune.  I think that Cassiroc does really well without the electro-elements personally…I think there’s more of the audible-sound in the ideas and performances of “10 Feet Tall,” “Save Your Luck For Someone Else” and the following “I Could Build A Rocket Ship” that reveal the special magic and potential of this artist.  He sounds much more at home and comfortable with the guitar-driven tunes in comparison to the electro-cuts…and I think that comfort in sound is largely the result of having more experience with one over the other.  I think the electro-ideas are still coming to Cassiroc and being reformed and refined…and I think the robust nature of each part that plays throughout his acoustic-guitar songs display the keys in the writing he still needs to apply to the electronic ideas as well.  Even though “I Could Build A Rocket Ship” wasn’t my complete favorite of the set – I think there’s a real pulse and vibrant life you can hear in Cassiroc during moments like these by comparison to the electro…and I think once he brings that spark to the electro parts of his music, he’ll have the final piece of his puzzle locked into place.  I think he’s done a great job of weaving the vocals through the flow of “I Could Build A Rocket Ship” and I liked the addition of harmonica…I thought these elements made for the strongest parts of my listening experience with this particular tune.

I can only imagine after reading all this what Cassiroc might be thinking when it comes to what I might say about the final track “Ania.”  On one hand, he knows that I dig this acoustic-led style better…but by the same token, he knows he’s taken more chances on “Ania” than he has on any other particular track…so somewhere over there across the internet, if Cassiroc is inclined to read reviews on his music…I’d imagine he’s bracing himself at the moment…

…without any need to do so.  The final cut on Chorus Cartel was undeniably my favorite.

I thought he tapped into a really cool vein here on “Ania” that’s like part Pavement, part Weezer.  It’s a slow-tempo and melancholy vibe – but one that really communicates the idea sincerely in the emotion.  The music is actually fairly sparse throughout the song…and it’s really on Cassiroc to deliver this final tune through the vocals – and he’s absolutely nailed this one with an exceptional and extremely beautiful, honest performance.  There are corners that could have been rounded more – and if he had chosen to do that, he would have sucked all the genuine authenticity out of this track.  Thankfully, Cassiroc shows a solid executive decision here in keeping this song sounding naked, intimate and completely stunning through a highlight performance on this new album right at the end.  A completely memorable song and final-experience – the intimate sound of the mood on “Ania” absolutely makes a perfect ending to Chorus Cartel and in my personal opinion, really shines a spotlight on a style of music that he’s ventured into that seriously works wonders.  Absolutely loved every moment of “Ania” – love the cello sounds, love the harmonica, the guitars are gorgeous…but it all comes down to the vocals of Cassiroc here at the end of the record – and he couldn’t possibly sound better.

I really think there’s a strong songwriter here that’s finding his way.  While I’m not completely sure that Chorus Cartel hits all of its intended targets – I think the potential here is extremely widespread, ambitious and really reflects Cassiroc’s appreciation for many styles of music.  “Ania” caps-off the varied-experience in the most beautiful, honest way you could hope to hear…one that certainly leaves you with the feeling that this artist truly WILL find his way.  You can’t possibly get it this RIGHT at the end of a record and not be heading into even more beautiful space in the future to come…so mark my words – Cassiroc’s got a lot to offer and the best is still yet to come.