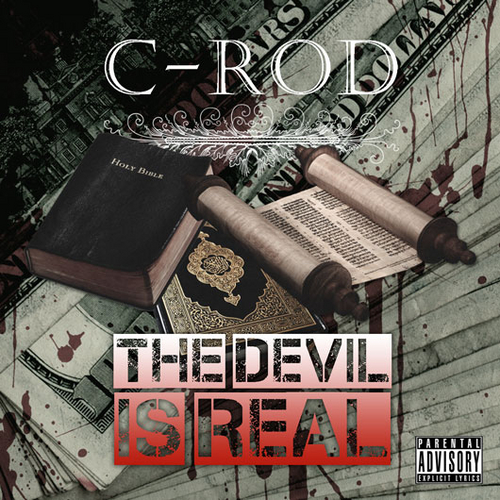 First thing that hit me off C-Rod’s latest record, The Devil Is Real, was the incredible beats he had found throughout this mix. C-rod himself has a wicked flow…almost sounds like he would have fit in with the Onyx crew from back in the serious-rap heyday. After the intro drops, he launches into hard-tales from hard-times right away in the opening cut “Abusing My Limits,” a literal account presumably of some near death experience gained from taking it all to the extreme.

It often does come down sharply to sample choice in combination with those microphone-skills displayed by C-Rod. Something like “See I Remember,” can sound incredibly bizarre when you hear it at first…but almost like the lesson in this message itself, the dreamlike vocals singing “See I Remember” are so unique in their sound that there’s no doubt about that becoming a memorable hook by your second listen. Soon enough, it goes from ‘bizarre’ to fitting perfectly…and you start to appreciate that C-Rod can take on any set of bars that come his way.

Truthfully…and even listening to a track like “Motherless Child” for example…I kind of want C-Rod to go at it all a little more aggressively. Lyrically, he takes no prisoners…I feel like it would sometimes become more effective if he went at the mic like an enemy; often C-Rod comes out smooth even in the roughest of pictures he paints through the words in his tracks. That being said, again, lyrically you can’t fault this guy whatsoever…he’s nailing it here in the verse once again with poignant words that no doubt hit home to many out there. Shout-out to the production too; whether it’s the tough low-end beats like “When I Met Her” or the beat-intensive “Ridin Shotgun With The Devil,” everything is mixed in perfectly and this whole record flows seamlessly.

Coming back to the original point about the beats being incredible…I mean, REALLY…check out the beat on “Ridin Shotgun With The Devil,” cause that is definitely one of the best beats I’ve ever heard. Absolutely love the dangerous feeling and atmosphere that comes into the music and lyrics here; C-Rod gets perfect assistance from some rad echo effects to make this track a real highlight nearly midway through. Another example where the beat is absolutely awesome is right in the following track, “When It’s Cold Outside;” while it might not have been my favourite verse I’ve heard from C-Rod here, there’s not a single moment that has gone by on The Devil Is Real where the beats haven’t been beyond creative and fantastically outstanding. “Off The Truck” – SURPRISE! Yep, again, the following track after “When It’s Cold Outside,” contains an absolutely sick beat including a wicked horn sample that sets it all off right. The point being…there is literally always something to listen to.

The opening of “City Of Dreams,” uses a real sample from Martin Luther King Jr.’s infamous “I Have A Dream” speech, starting out this track in a completely haunting but effective way. Similar to a beat-by-Dre, this track pounds along with an old-school thug-rhythm you gotta love as it brings you right back to the day, whichever day that was for you…

“Call Of Duty,” is completely kickass. I saw the movie Toys in theatres back in MY day, thinking I was going to see the latest comedy from Robin Williams. What anyone that has seen it knows, is that the movie had a deep social commentary that ran throughout and a foresight into our future that wasn’t exactly…well, popular. Did this movie fail at the box office cause it sucked? Absolutely not. It promoted a social consciousness towards what was happening with videogames and how early we’re sincerely training our youth for combat through those means. To me, it’s an undisputable link between ‘training’ and the actual interest to go into combat through these games like “Call Of Duty.” With the brilliant samples laced in this track, I’d have to assume that, even if C-Rod isn’t about to pop in the VHS copy of Toys anytime soon, that he still completely shares this view.

“The Art Of War” hints at that harder-edge I’ve been looking for from C-Rod in the delivery. This one comes out sounding 10% more committed just based on that alone…there’s an extra spark, extra energy there in his voice on this track before he hands off the mic to fellow MCs Solomon Grundi and Epik. This is a collaboration that works incredibly well. Not quite sure which voice is who’s…but not to matter, not to worry; they’re all KILLIN it. This is a great track with another great beat in the later stages of The Devil Is Real.

Absolutely HOT last cut on this record, “The Last Laugh,” has a massive synth sound in the lead spot and it is just completely awesome…seriously; this wicked & menacing tone just swells in and out of the track with an absolutely SICK drumbeat that works and works and WORKS. C-Rod brings it harder than he has yet in this batch of songs and truly nails it by the end here…you can hear it, he’s RIGHT in this track and just maximizing his ability to bring words to the beat, this time matching perfectly with the tone of the music through just a little bit more aggression in his voice…and it works.

As the final track plays out…”Outro;” it doesn’t take long to realize that this is much, much more than a simple “Outro.” It’s here in this final track that the man C-Rod has become is truly put on display. You’ve heard about the hard times and the rough ride he’s been through over time throughout the songs that came before…but here…C-Rod offers his track of redemption. This is an incredibly moving and really kind of daring song to end of this album with…one that really lets you in to the inside of this artist’s heart. I think it’s a bold, brave move that resulted in one of the best tracks on this record and certainly gained my respect twice over by putting it all on the line like he does in this final song.