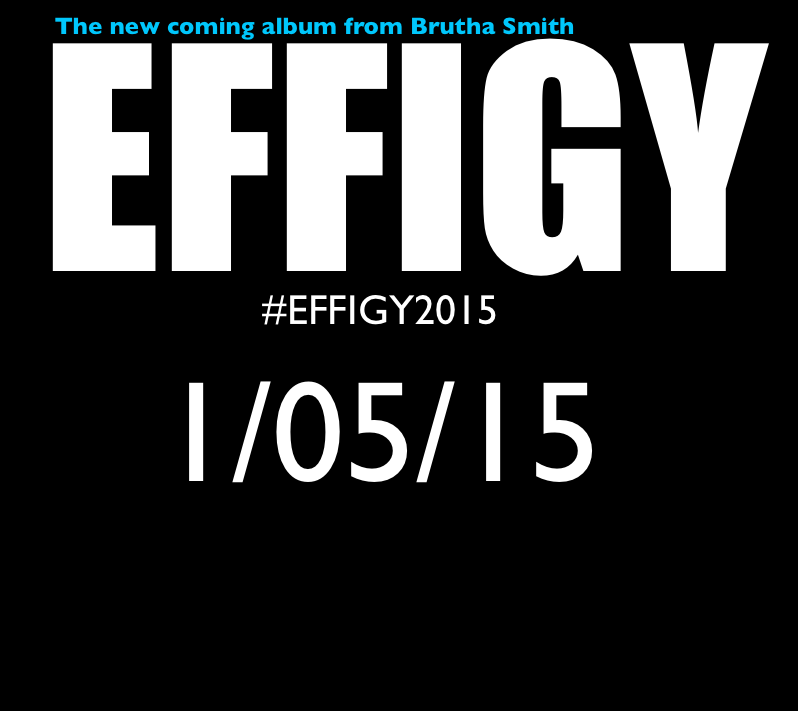 Sacremento, CA’s hip-hop recording talent, Brutha Smith, is back with a fresh set of rhymes with the album Effigy; the follow-up to his incredibly well-received album The Lotus Effect. While the beats often come at your ears with a playful bounce & rhythmic-groove, make no mistake – these songs can be pretty gritty when it comes to the subject matter. Effigy documents much of the personal story and struggle of Brutha Smith, but more importantly documents his determination to continue rapping and overcome any obstacle in his way in pursuit of his dreams.

Personally I really dig this kind of juxtaposition in music. With beats that range from the mellowed-out, smooth opening, title-track “Effigy” into extremely hook-laden, current beats like the following track “Never Knew Him,” no matter what the style or tempo is at, the lyrics come at you in a completely raw but relatable manner. His articulation and delivery over the mic pull you in to listen closely to what’s on Brutha Smith’s mind and beats like the ones found in “Never Knew Him” are the exact musical hook and way in that the listening ears need.

But what I truly respect above all things are when an artist has broken down all the walls like Brutha Smith has here on Effigy. Listening to a track like “Fish Bowl,” well…what can I say other than I can definitely respect the way this man thinks. There’s no topic off-limits, no subject he won’t take on. He’s got a real gift for words; the flow harkens back to the days of old-school with Biz Markie & KRS-One, updated in a modern way almost sounding like what you might find from Gorillaz in a rap track.

Something like the track “94” makes you appreciate this album as the art form it is here, rather than just another set of songs. Timeline in check, it leads into “Cobain,” a track that offers some real insight into the man that Brutha Smith was, is and becomes – mind you, this is thematically spread out throughout the album as well. It’s one of the more downbeat tracks on the album in terms of its subtle, chilled out groove; but again, completely effective in combination with the lyricism.

Taking you back as far as it can go – Brutha Smith gives the early history over the track “Mamma,” but also pays true respect to his family matriarch. Again, very cool to see just how much ground he’s been able to cover and what a vibrant story his life has had overall. The production is very well mixed, at times offering some brilliant sounds of that true-vinyl feel, warm and with that slight crackle like it’s spinning right in front of you. I mean…damn…I listen to a track like “A Taste,” and I can only just imagine this coming straight off the turntable. One of the more unique & diverse tracks on Effigy – this track just spins & grooves through Brutha Smith’s signature-style alongside a melodic guitar line that fits perfectly.

As this new album bumps into the final track “Freak,” Brutha Smith almost rhymes and snarls in ways closer to something Busta Rhymes or DMX might have put out. This track has flow, it has venom, hunger, commitment, passion…the perfect way to end this incredibly personal album by laying it all completely on the line one last time. Effigy officially drops on January 15th, 2015 – get them speakers shined & ready!

Follow Brutha Smith at his official page at: http://www.bruthasmith.com/