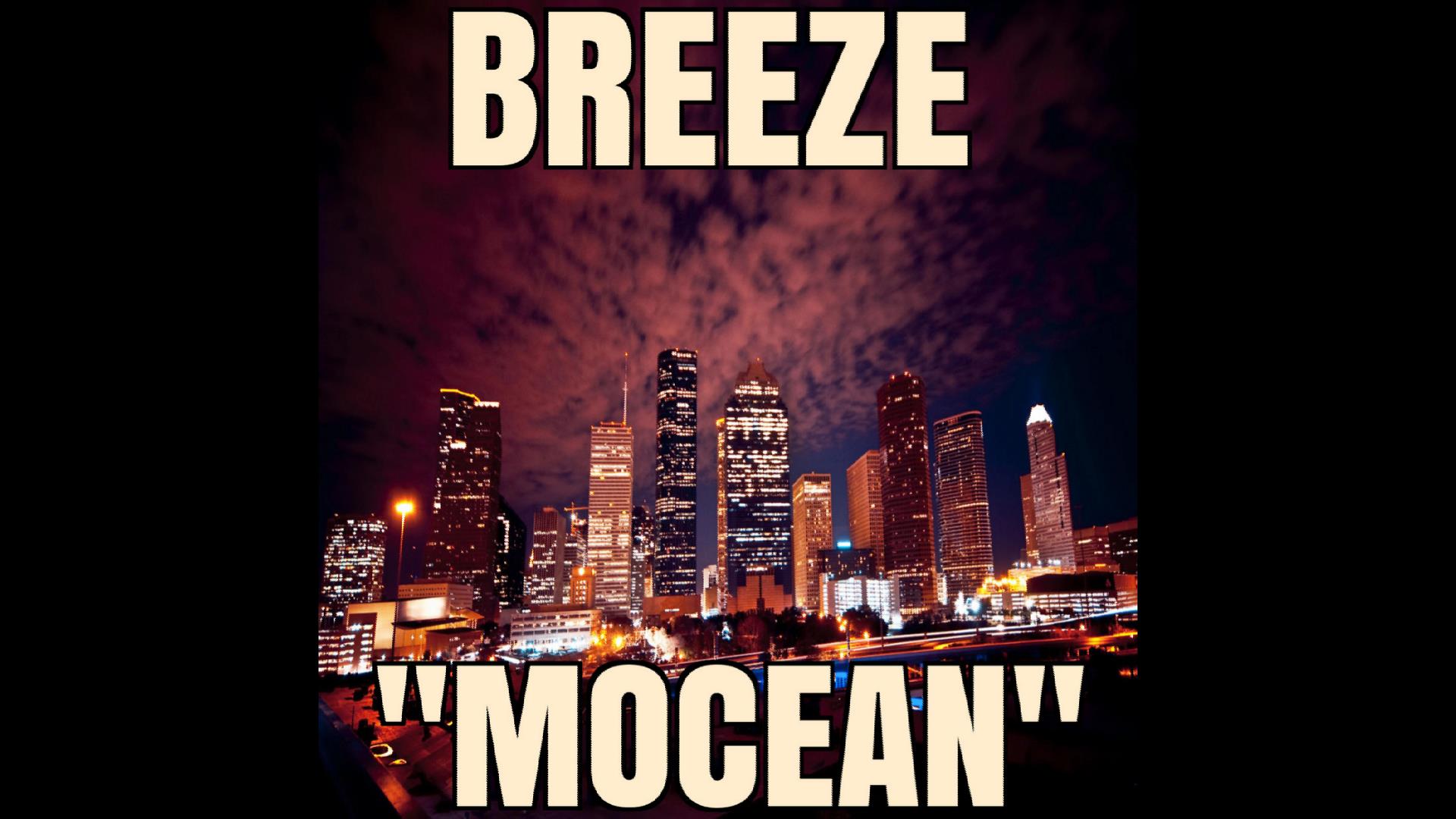 This…is demanding to listen to.  For the record, that doesn’t equate to anything negative, it’s just good to be upfront about what it’s like to experience “Mocean” by Breeze.  My ears are the warriors of my face…I’m ready for pretty much anything that comes my way…but I’ll be damned if I didn’t have to really listen close to this one to hear if it really worked.  Compliments to the chef – it does.

I mean…at the very least, it does for me.  I can definitely see just about everyone out there questioning whether or not they’ve got a stream that’s skipping as they play “Mocean,” or a wack-file that has a bug in it – the digital skip in the edit of the music driving this single is much closer to chilled-out IDM than what you usually find in hip-hop or rap.  To an untrained ear, “Mocean” is gonna sound straight-up crazy; but if you’re listening closely, you’ll hear the vocals are coming out completely intact overtop of the music’s intense structure…and that there is the most important clue in revealing that everything done in the music from the way it sounds to the way it moves, is purposeful and intended.  So don’t get me wrong…demanding is also another way of describing music that’s interesting or something that challenges the typical conventions of what we know – often that’s a sign of a highly imaginative artist with the creative backbone strong enough to go after something that might not even exist yet.  Now, I’m not claiming that Breeze is completely reinventing the wheel here, but I think the level of skill it takes to get through the bars and beats of an edit like this with as much precision and confidence as you hear from this emcee is certainly impressive and noteworthy.

If anything, that might be people’s main beef with “Mocean” if they have one…that the jagged style & edit on this cut could potentially distract from all the clever lines this wordsmith puts into this single.  You put in the work like Breeze does here…well…it’s worth having the people hear each and every word after making that effort; he raps clearly so that you can hear what he’s saying for sure, but admittedly it can be really tough to detach from the wildness of the music to stay focused on the words at all times.  Again, not saying that’s a good or a bad thing – that’s all about what Breeze wants to achieve out of his style and his messages on the mic…he might want the sound of the music to be more aggressive or invasive than his words at times…that’s all up to him as an artist and what he wants us to hear most in what he puts out there.  It’s something to consider…because it will be tough for many people out there to listen to both of this song’s main elements at the same time – you kind of default to the music and the bizarre but captivating & hypnotic way it moves for the most part unless you make that specific effort to be more focused on the vocals and what Breeze is rhyming about…I suppose that’s what I’m saying.  Once more, to be clear, nothing wrong with that – in fact it gives people plenty of reason to return and reexamine this track, what they heard, and how it all makes sense to the ears eventually.  The more you listen, the more you get it…it might take a few spins but there’s lots about the complexity and flow of “Mocean” that makes that journey completely worthwhile.  I enjoy something challenging to listen to like this and the high-caliber flow of an emcee that’s committed like Breeze is here on this new single.

I will say this…I think at the beginning of “Mocean” Breeze might come out just a bit above the mix in comparison to where he eventually sinks into the music shortly after.  It’s not too noticeable…just enough to hear that he immediately came in to spit the juice straight into the mic and let his flow roll as quickly and fluidly as possible right from the drop.  I’ve got nothing against enthusiasm…I think that’s what that is.  It doesn’t drop – the passion and skill continue to make themselves known through the intensity of the way Breeze raps continuously like he’s got an unlimited oxygen supply – but you will notice that the vocals eventually crawl more closely towards the levels in the music to make the whole track sound like it belongs together even more as it plays on.  Breeze hits his stride & swagger early on and puts in a mesmerizing performance overall…I think you’ve gotta commend this guy for creating something here that you don’t hear every day and executing strongly all the way through.  “Mocean” might be demanding, but it also sounds like a fresh idea in Hip-Hop/Rap to me, which is something my ears always appreciate and I know yours do too.  At first you’ll think he’s crazy…but after taking this one in a couple times, you’ll realize there’s potential genius at work here that could put a wicked new twist & sound into a genre you already know & love.

Find out more about Breeze from the official website at:  http://www.bandofthehawk.com/