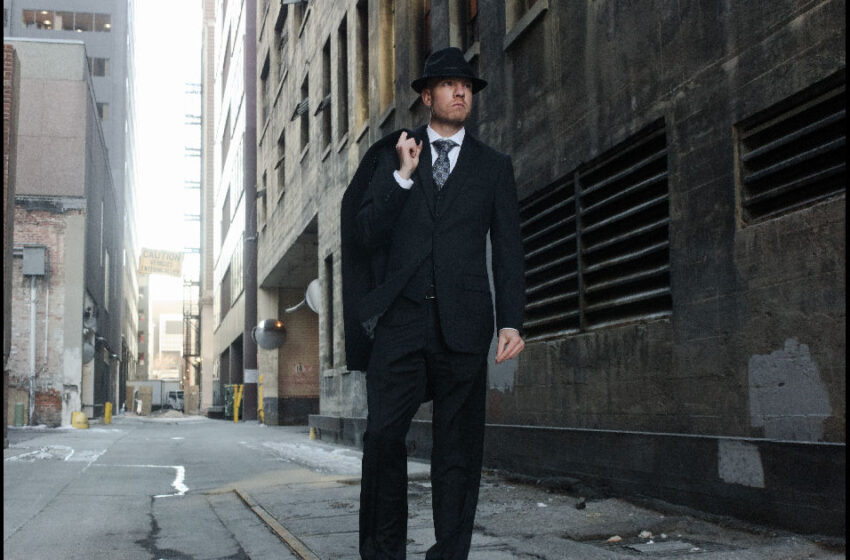 It has been interesting trying to piece together what this dude’s all about, that much I can tell ya for sure.  On the one hand, you’ve got a bio that’ll tell ya how he’s embodied the “The Roaring Twenties and The Great Depression – and on the other hand we’ve got a sound that doesn’t seem to enter that realm whatsoever…which makes for…well…it makes for a confusing intro to an artist I suppose; and lucky you – you get to try & figure this all out with me in real-time.  So are we really just talkin’ about the “flappers and fedoras” here, with respect to the style?  And then like – as a fashion statement but not really a part of the music?  Brandon Riley – I gotta confess sir…you’re a bit of an artistic enigma to me right now.

So.  Here’s where I’m at.  I think Brandon’s probably in for a bit of an uphill battle when it comes to his new single “Scar Tattoo,” despite many things you’ll find along the way in listening that you may like or justifiably even love.  The reality is, he’s got a very mid-tempo energy goin’ on, which is just about the hardest pace to make an impression on the masses with out there – that already presents an inherent challenge in getting this track out there.  Radio-waves and playlist curators…even they tend to shy away from the mid-tempo tunes in comparison to the vast majority of what they’ll spin for ya.  Of course, it’s never stopped any artist or band from making them anyway, nor should it – believe me, I ain’t implying that there’s no value in a mid-tempo song – art comes in all forms.  Yet that’s also where the other main obstacle lays in waiting for Brandon’s new single as well – the artistic design & length of it all; I’m always going to advocate for art & music finding ways to become symbiotic…but I do recognize the challenge it tends to create when getting songs & records out there as well.  Brandon’s the kind of artist that’s going to carve out his own path…ultimately, it’s the most respectable route you can take with a music-career if you ask me – but the truth is that it can be a long, long time before the people catch on to what it is you’re actually creating.  As in, it’ll take a whole bunch more singles & songs being put out there by Riley before anyone really even knows for sure if the artistic twists he’s put into his atmospheric Alt/Pop are resonating with the listening ears.  He’s choosing a path that requires patience, but it’s still a fully valid path all the same.

On the brightest side, I don’t think there’s much more we could have asked from Riley when it came time to perform – I feel like he got to the heart of what he was going for with “Scar Tattoo.”  When you listen to the detail in the music surrounding his vocals, you’ve gotta be impressed with the magnificent way this song has been structured and how it all plays out – it’s audibly cinematic, dramatic, and multi-dimensional to experience, like its own mini-movie, but as a song.  You still with me?  Good.  So think of it this way – there are pivotal plot points in a film that have to connect for it to work, and the same theory applies here – and I felt like that’s where Brandon seemed to come through biggest in the clutch.  For example – I think he’s got some really great ideas in the first 3:20 of this song…it might not be the most typical tune you’re gonna hear this year & uniqueness can work both for & against any artist or band out there in the court of public opinion – but to me, there’s no doubt he’s kept the ideas engaging.  Now – if we’re talking about that transition into the bridge around 3:30, and pretty much everything that occurs afterwards, I’d tell ya that’s where the real highlights of “Scar Tattoo” are most noticeable.  I like the mix & the production, I like the lyricism and Brandon’s insightful tale of embracing what we’ve been through to become who we are today…everything sets itself up well, and offers you a glimpse into the artistic realm of sound that offers something much more unique to experience than regular hooks.  Some of the spots surrounding him, like around the 1:45 mark where the music takes over for a moment – it’s spellbinding stuff – there’s real weight in the music and giving it some space to shine pays off well for this guy as the song plays on.  The accent of piano plays a big role in the melody, bass-lines too – like I said, musically, there’s actually quite a bit of detail within what you hear, and there’s always value in that for us as listeners.  When this track clicks past the 3:20 mark and creeps into the breakdown to follow, Brandon creates a straight-up stunning moment…a monumental highlight that’s like the fusing of Radiohead and Alt-J for a brief moment in time; before & after that, on this particular cut, he’s probably more comparable to something akin to Spiritualized overall.  It’s good company to be keeping – but you get what I’ve been saying to you all along…these are all bands that blazed their own trail, and it was up to all of us as listeners to eventually catch on to the artistic depth each has in their music.  I suspect the same will be the case for Brandon Riley – it’s clear he’s capable, it’s clear he’s got ideas that work, and with the effort you’ll hear in a song like this, it’s equally clear he’s got the drive & ambition to create art & music that will take him wherever he wants to go with his career.  It might not blow up overnight – it might take years for people to catch on officially en masse – but in the end, I’m always confident that efforts like this do not go unnoticed, and I’m just as sure an artist like Riley enjoys the journey much more than arriving at the final destination anyhow, you feel me?  He’s in it for the art & the authentic love of the craft, and above all things, that’s most likely to be your main takeaway from “Scar Tattoo.”

Find out more about Brandon Riley at his official page at Instagram here:  https://www.instagram.com/brandonrileysings