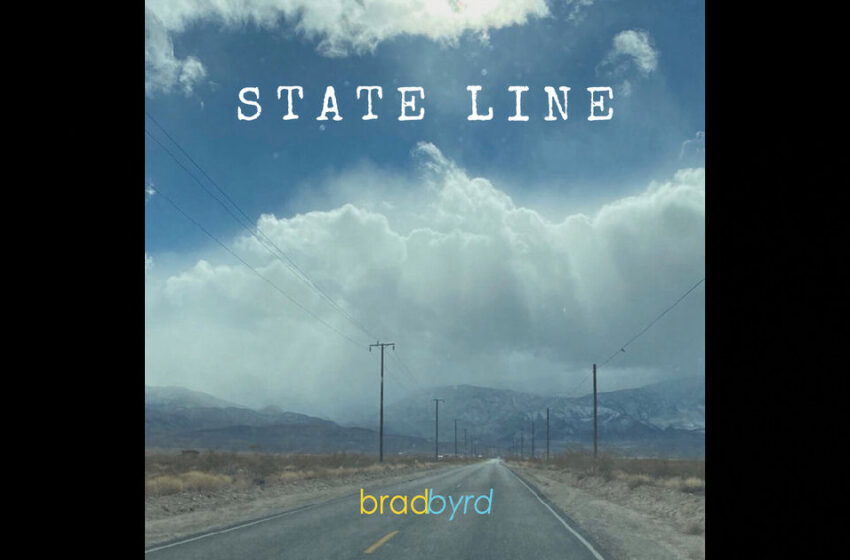 I don’t know exactly what I was expecting outta you Mr. Brad Byrd, but this certainly wasn’t it!

This was so much better than any hopes I could have had, no matter what they could have been prior to listening.  I sometimes forget how much that ‘Alt’ tag in front of Country can make a difference in the music I’m listening to…especially when it’s paired with Indie-Rock vibes…then it’s a true case of the ol’ chef’s kiss and pretty much exactly what I love to listen to more than just about anything else out there.

For the record & for what it’s worth, I think “State Line” is absolutely gonna be one of the best songs I’ll hear in 2021 – and it’s a single I’m seriously confident will be in rotation over here on my own playlists long into the future.  That being said…I can also acknowledge that it’s not exactly the easiest kind of cut to get out there with a couple major factors working against the tendencies of the mainstream listeners; the inherent (and completely beautiful) sleepiness found in the first three & a half minutes, and the sheer fact that it’s just shy of being eight-minutes in total length.  Both of these elements make a song tougher to get out there to the listening ears where it belongs, but by no means whatsoever impossible.  In fact, I’m pretty sure it’s the duty of places just like ours here to make sure you’re aware of songs just like this…at the very least, I know I’ve always considered that to be a major part of my responsibilities to the music-scene we share together.  So here it is, the easy-to-read verdict on what you REALLY need to know about Brad Byrd’s new single “State Line” as concisely as I can put it to ya – you cannot miss this tune.  Not if you wanna consider this year to be complete by the end you can’t – “State Line” is essential – in terms of songwriting, in terms of ideas, sound, musicianship, vocals…you name it & it’s been nailed.

In his own words, “State Line” “is basically a song about being stuck, and knowing it.”  Introspectively insightful & poetically designed, Byrd proves to be the ultimate master of the reveal, remarkably patient & professionally poised throughout this entire performance he puts into this single as it blossoms open.  And honestly?  The way this song expands should leave you speechless – it’s pure sonic genius, full-stop.

So look…I’m not telling Brad anything he doesn’t already know about the sleepy & hazy vibes of the song’s beginning or how the public out there would likely react to it – you can see in the official posting of “State Line” at Bandcamp in the details written about it, that even Byrd knows he’s gotta keep y’all listening to that all-important moment around the 3:30 mark, where this single takes on a second-life altogether.  And I ain’t gonna lie to ya folks, for me, that was just about the easiest ask of my ears that I’ve had all year long – I have no problem whatsoever listening to the droning moodiness & subtle emotions that surge quietly throughout the first part of “State Line” – and I recognize completely that, without this set up to begin with, the payload that follows afterwards wouldn’t have half the impact.  It’s in hearing how “State Line” bursts itself out of the dark and into the light that’ll leave you with one of the most uniquely inspired surprises you can have listening to music…it’s a feeling truly beyond words.  Whether or not the gentle & despairing melody at the start will prove to be everyone’s jam or not, I can’t tell ya for sure…I can only ever tell ya what I hear from my own point of view – and as much as I like the latter half of “State Line” and think this song evolves in the most spectacularly beautiful of ways you can imagine, I readily welcome the opening 3:30 with every re-spin I’ve put into this song, every time.  Brad taps into an incredible atmosphere that brings out genuinely captivating sound from the pores of your speakers…it’s all highly evocative stuff when it comes right down to it – no matter what gear he’s in or which half of the song you’re listening to, the right energy is in all the right places at all times.  So as he churns his way through the melancholy opening of “State Line,” to me, it was no problem at all to stick with such an inspired performance…just because it moves slowly, don’t get it twisted – this is as focused of a tune as you’re likely to hear, with a passionate performance that shows strength in every second.  Many out there would likely listen to that first 3:30 and feel like Brad’s ventured into something akin to like, a low-key, forlorn Radiohead-esque vibe or Band Of Horses-like sound as it starts…but then you get this like…sparkle & uplifting presence in the atmosphere that creeps in through the guitars & smartly placed keys in the mix that brings in that same ethereal & sensory vibe that both comforts and sends a chill down your spine at the same time, like a track like Duran Duran’s “Ordinary World” once did long ago, as “State Line” bursts open.  From about 4:30 on-forward, the vocals are minimal – at that point, Brad’s already achieved a glorious victory here with the way he’s sung this tune, and now it’s time to let the music have its much deserved moment in the spotlight to bring it all home.  And ya know something?  To say that it ‘works’ would be the mildest way you could put it – what Byrd and the musicians he’s enlisted to play this song with him – John Kimbrough (Guitar), Daniel Rhine (Bass), Ben Peeler (Steel Guitars), Jerry Borge (Keys) – they’ve entirely pulled off a monumental achievement with “State Line,” and put in a performance that every single hand in the mix should be proud of.  To me, this was nothing short of brilliant & absolutely mesmerizing – I love everything about “State Line” from the writing to the execution, and truly think it’ll be one of the best we all hear in 2021.

Find out more about Brad Byrd from his official website & join the Byrd Nest at:  https://brad-byrd.com