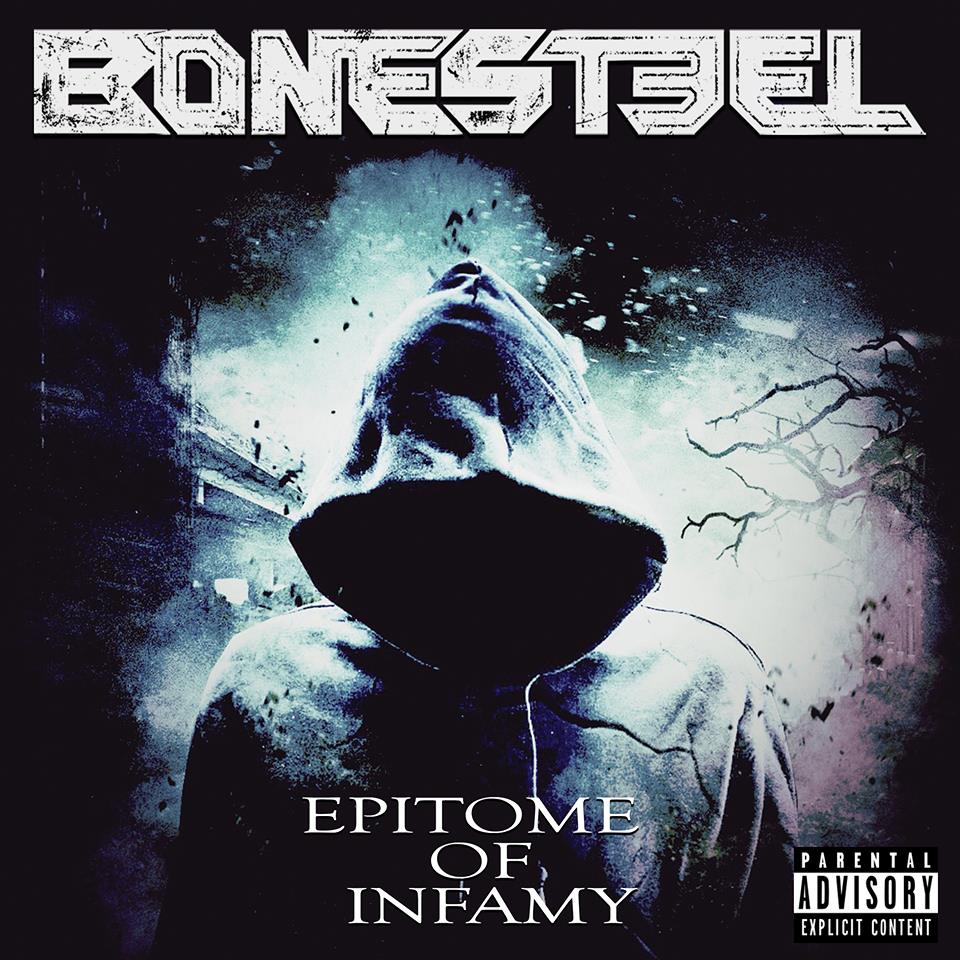 Seriously explosive tunes from Bonesteel, a three-piece from Los Angeles, CA that sounds like they’re ready to torch the entire sunset-strip with their big & beefy, meaty-metal sound.  Mind you, there’s a lot more going on…but I’d definitely say metal is certainly straight at the forefront of what they’re going for.  Mind you, I’m also not so sure that an entirely scorched-earth isn’t what Bonesteel is going for either…just sayin.’

But you get a hint of the range of where the music might take you early on in the intro-track called “The Pisces.”  Starting the Epitome Of Infamy EP with atmospheric-sounds…before breaking into kind of like…Modest Mouse-meets-The Deftones…rhythmic, tough, intense atmosphere…still bouncy and somewhat light & dreamlike…and then WHAM – “AlcatraZ” comes slamming into your speakers.  The immediate brutal-grind of the opening verse breaks into a seriously misty-moment before hammering like a tank through a brick wall with the storming chorus of “AlcatraZ.”  I really liked how the vocals came out in the third breakdown nearing the three minute mark…and even though this track is obviously a lot harder than most out there are…the strings and build of “AlcatraZ” starts to really remind me of “A320” by the Foo Fighters.  No sooner can I think that to myself than lead-screamer Jake Bonesteel lets out an insanity-filled Grohl-esque roar filled with the power of rock.  Like, to the BRIM people…we’re not fuckin’ around here.  It’s harder than I’d normally go myself, but there’s lots I can appreciate about this track and I think a lot of crossover appeal, even with its punches of solid-Bonesteel coming ham-fisted at you…I still think it would appeal to more people than they might think themselves.

Whereas say, a track like the title-tune “Epitome Of Infamy” is more like the assertion and confirmation of their street-cred in everything from hard-rock to metal.  A little more of a straight-ahead tune here…I’d hate to say almost like a Disturbed-thing going on at points, but I’ve got no choice, that’s what I’m hearing.  And by Disturbed-thing, you already know what I mean…that whole singing-but-not-singing thing where you don’t really need words, just maniacal sounds.  I think Bonesteel is made of stronger stuff than gimmicks like that…but no harm in dipping into different ideas, textures and ways to execute a song right?  The title-track has some moments overall, but I think in a way, came out a little bit of a jumble as it rolled through its progressive composition.  It attempts and reaches for a great many things inside this one song of less than four-minutes…and as a result, you get some solid parts, but somewhat of an uneven listen when it comes to “Epitome Of Infamy.”  Mind you…I’m like the last guy in the world still resisting Disturbed…so a ton of you out there are bound to feel even more connected to this track than I would.

I was a little tossed up on “Going For The Kill.”  I can tell you for certain, things changed in my opinion right at the 2:15 mark…because from that point, the band is in the mood for complete & utter chaos.  Throughout the beginning, I kinda felt like the rhyme-scheme of the lyrics matched the music a little too closely…and I think, if anything there’s opportunity for Bonesteel to explore that kind of terrain in writing lyrics that add more to the music rather than co-exist with them, however huge that struggle might sound.  And it does sound huge on “Going For The Kill” – especially at the roaring-ending.  Jake can absolutely unleash the hounds of hell with his monstrously massive, deep, apocalypse-inducing, tortured & traumatic screams.  They are more than beastly…they’re a full-on Rob Zombie movie in a single massive shout of serious throat-pain.  But yeah…overall, it’s the looseness and stomp of the ending that did it for me in “Going For The Kill” – they let themselves really have some fun with just how heart-attack serious this all gets, and as a result you can hear the golden-results with a relaxed & perfect performance from them all.  The end of “Going For The Kill” is so huge it’ll make you grind your teeth in anticipation of the impact of the sky about to fall down around you.

“Mythic Visions” has some of the most audible hooks, rhythm & groove in the eye of this hurricane.  Impossible not to see this cyclone whirlwind coming straight at you – it immediately begins to pound with serious authority…innovative breakdowns…and I mean, for a three-piece band, you gotta hand it to Bonesteel for writing the handbook on how to shake a building’s foundation to the ground.  These guys make NOISE, loudly & proudly…and “Mythic Visions” is another solid example of just how extreme they can get.  Now…they’re gonna hate me for saying this…but it’s just a reflection probably more on me than it is on them – but I love the ending of this cut.  It all lightens-up…just enough from the brutal, slaughterfest of in-your-faceness that Bonesteel continually serves you to allow your shoulders to relax for just a moment, however brief it may be.  But truthfully – it really does sound good…and that one moment, maybe that and the intro…really those are the ‘lightest’ spots on the entire record…but they hint at a whole level of alternate possibilities for the sound of Bonesteel and what they could be both capable of, AND successful at.

But you can probably hear that point I’m trying to make about those vocals matching the music too much when you hear the opening verse of “Everest.”  I think the explosiveness in the chorus makes up for it…and I mean, it’s not like it doesn’t work…it does…I’m just not sure how much it does to help set them apart from the rest.  I like the delivery on it…it’s got solid menace in the verse…but it’s that chorus that really takes the whole track to the next-level by force.  Push, pull or drag…once that chorus starts up and Jake lets loose – this song gets downright atomic.  Great drums from Andres Vega and excellent grind of the guitars from Alex Cain just pound & pound, relentlessly, never letting up for a single second as Bonesteel takes this EP to its final moments and “Everest” ends.  Everything about this EP was deadly…seriously heavy and a real demonstration of how they can pull in listeners of the fringe of these extremes – like me – in to really listen to what’s going down.  Solid effort from Bonesteel…I think they’ve done well to establish their authority and right to be here, and I think they’ve hinted at the promise of even more dimensions to their sound coming in their future.  Lots of possibilities here.