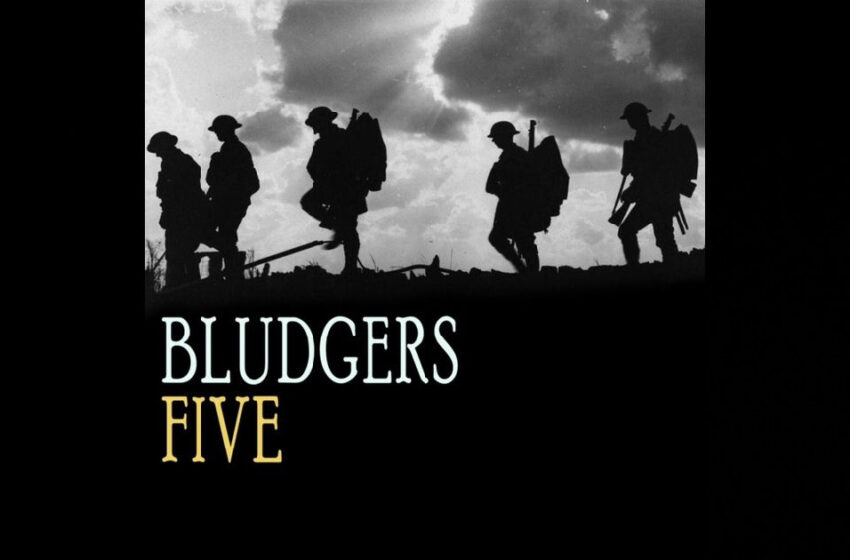 I’m still trying to get my head around the band-name though…it sounds like you could beat someone with Bludgers.  Not since Led Zeppelin and Anvil has a moniker sounded like it was so damn heavy.

They’re an amps-up band from the sounds of things on “Dirty Laundry,” but you don’t have to fear the heaviness of Bludgers like I’d go down fighting & swearing you’d be so right to assume would be there – for the most part, if not all of it, this single actually has a healthy dose of invitational sound underneath the grit of their distortion and a melody that’ll connect to ya.  Comparisons will get you a closer idea but still not quite get ya the full picture – I could tell you that Bludgers will meet somewhere in the middle of John Fogerty and Foo Fighters from your mainstream diet, or that they’d be a cross between something along the lines of Yellow Paper Planes and The Most Beautiful Losers out there from the independent scene.  They’re similar to all of’em for a brief moment or two…and quite likely, you’ll come up with a few names of your own – maybe something like Athlete or Elbow – like I said, you’ll find pieces comparable, but for the majority, you’ll be pleased that Bludgers are doing what Bludgers do, and Bludgers ain’t tryin’ to do anything other than what Bludgers would do, or sound anything different than what Bludgers should sound like when their left to their own devices.  Apparently I’m also embracing the band’s name.

With what I would tell ya is definitely traced back the roots of mid-90s style on “Dirty Laundry” – you’d have to imagine my surprise at finding out that was more or less where Bludgers had actually started.  According to what I can find out there online, it looks like they made their debut somewhere back in ’94…had somehow rocked themselves nearly out of existence only three years later with three records under their belt at that point, and then began to resurface another nearly twenty years down the road in 2016 with the release of their album Separate Ways.  Flash forward about another four years later, they’re releasing a bunch of old demos from way back online, in addition to a shiny set of five singles that got revealed throughout 2020 and the start of 2021, up to the release of their new record called Bludgers Five, which indeed has this very single “Dirty Laundry” in its set-list.  How am I doing so far?  Have I caught up to all this story they’ve got?  At least a piece of this puzzle to create the rest of the full picture from perhaps?  It’s refreshing to find an independent band with more than a ten minute history.

Their sound reflects their longevity, even if they took a time out there for a moment; both in the style of their overall songwriting, and in the tightness on display between the players of the band.  You’ll find no strong objections from me to be had here – I like what I hear on “Dirty Laundry” in terms of how the band plays together, I like the mix of grittiness & sweetness they’ve loaded into this single, and ultimately I like how each piece of the band really seems to fit in comfortably, creating a solid balance between them.  On a more objective level, within this style & sound they’re rockin’ – it’s harder to say they’ve gone & recreated the wheel here, but they have certainly created a turn-uppable tune that I’d reckon many will enjoy for its hybrid mix of Rock, Alternative, Alt-Folk/Americana Country vibes that creep in to the adventure along the way.  There’s a lot here to be found that’ll appeal to a broad range of people far & wide throughout the globe – and you can certainly include me in that list; no one out there needs to recreate the wheel to keep us happy to begin with – we just want rock-solid tunes and “Dirty Laundry” definitely qualifies in that regard.  Where I think they have the most potential to make a lasting impact however, is through the lyricism you’ll find here – I think they’ve done an outstanding job.

And this is coming from a guy that would readily admit that…well…I’m not even 100% sure I know what the song is actually about!  But therein lies the beauty folks – we’re all gonna hear this song and jump to different conclusions as to what’s being said & what they mean – and if you’re a regular reader of my reviews, you already know how strongly I feel about the value of interpretive lyricism – it’s endless gold.  Tracks like “Dirty Laundry” are expertly designed to leave just that little bit of detail out to make it about anything too direct – and thus, they leave it to our own minds to fill in the blanks.  To me, “Dirty Laundry” was entirely about how we’re dealing with the information age in a new society and fearlessly examines the good & the bad of having our biggest secrets out there in the world for all to see, all of the time, as they currently are in the world we live in.  The question becomes, do you hang it all out there for the world to see and live with those consequences & judgments?  Do you hide it away and hope that Alexa just took a quick coffee break, and that the NSA can’t really hear ya in the comfort of your home anyway?  I’m sure you know where I stand on this if it ain’t your first time to our pages – hang it UP – put it out there loud’n’proud and wave your “Dirty Laundry” like a flag of honor; it’s entirely because it’s already out there anyway whether you like it or not that I write the way that I do & say whatever it is that I say.

If you’re making your music right, you’d be doing the same with it as far as I’m concerned – it might seem like a somewhat scary concept at first until you realize it pretty much levels the playing field in every conceivable way…if you can put yourself out there, in my opinion, you should be willing to stand behind everything you say & do with all the conviction you got…and if you can’t, also in my opinion, well…that’d be the real “Dirty Laundry” in this world.  Again…this is all based on my own interpretation of what I’m hearing, but I’d assume this is somewhat close to what they’re getting at on this single from Bludgers Five…but if it’s not, then like I said earlier, you gotta love the value of interpretive lyricism.  To me, it felt like Bludgers got a lot of miles out of this tune…and through their words they’ve managed to take a southern-rock based style & sound and turn it right into a whole crash-course in personal morals & philosophy that you’ll fully dig on.  I don’t know about what you had planned for your Monday but I bet it wasn’t that!

Find out more about Bludgers from their official page at Facebook here:  https://www.facebook.com/Bludgers