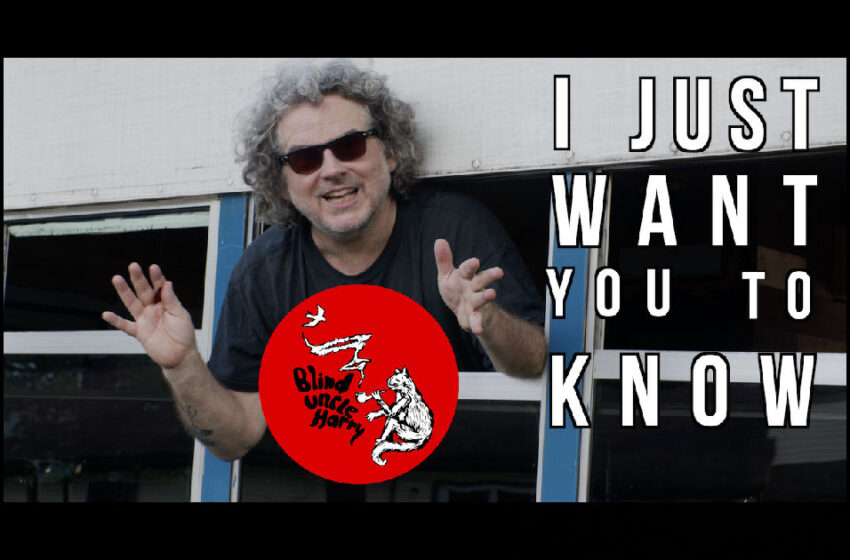 I ended up stumbling onto this dude’s music sometime around the start of summer last year through a really unique experience in reviewing Blind Uncle Harry’s single called “Song For Kori.”  It’s tough to explain all of what I found in listening to that tune in a quick intro here…but suffice it to say, it was one of those moments I certainly didn’t forget.  Being memorable doesn’t equate to having the world’s best song of all-time…there are plenty of ways to go about being memorable & this man knows many of’em.

I figure you can look at a track like “I Just Want You To Know” in at least a couple ways.  You can go surface level and listen to it for the Folk/Indie vibes that Blind Uncle Harry generates and the inherently strange, kind of somewhat rambling style that comes along with it…not entirely uncommon to the genre when it comes right down to it, but credit where credit is due, Harry reveals he’s got his own thing goin’ on in that regard…there’s still plenty of identifiable style.  If you’ve ever heard the offshoot alternative tunes from the Grunge heyday, or again, the Indie/Folk sounds in the underground that ended up taking over from there below the surface of mainstream meathead Rock for the years that followed – “I Just Want You To Know” fits in with those loosely structured melodies that have their own authentic pulse.  I never go into a track like this thinking it would necessarily be everyone’s jam…it’s really just not the reality – that’s not on Blind Uncle Harry, that’s just the nuts & bolts of a style of sound that’s more niche and proudly on the fringe.  Essentially, you’ll find a song like “I Just Want You To Know” would give the people out there needing hooks & tangible melody to guide them along just enough to never quit on it – but at the same time, relentlessly challenges the listeners by coloring outside of the lines deliberately when everything could be so much more simple & straightforward.  Complexity comes with a cost, even when it sounds like it all comes naturally.  Harry could meter out his verses syllable for syllable to make sure every beat matched every bar if he wanted to – there’s no doubt about his skillset – it’s simply boils down to the choices he makes for the art he chooses to create – and his songs, from my limited personal experience so far, seem to be much more of a vehicle for his words than perhaps any other element.  The guy’s got a lot to say…and so you get this mix of rambling & endearing melody that runs together and becomes a real bridge between singing & muttering the many thoughts roaming around in his head out loud.  Let me be crystal clear with all of y’all…there ain’t nothing wrong with going this route…having a whole lotta words when you’ve got something real to say like Blind Uncle Harry has, can be an extremely good thing…and for myself personally, I enjoy that aspect of what I’ve heard in his music so far.  Objectively, more words directly = less space, less time, and less opportunity for HOW those words get to be sung though…and that’s where Harry still gets to make the choice.  Does the priority become getting out each and every word, exactly as he’s written them down, potentially at the cost of being able to sing a note or two a little more smoothly, or are the words always the most important ingredient?  That’s the debate to be had, and it’s one that’s already been raging longer than either Harry or I have been alive for.  There is no real answer – we all like what we like & love what we love…and that’s all it is.  The point however, remains the same whether the choice is an intentional one or not…that’s the trade that’s being made here…accessibility versus artistic freedom…”commodification” & “corporatization” versus being who we ARE & who we want to be – am I right Blind Uncle Harry?  He could round out the corners if he wanted to, maybe trimmed a word outta the lyrics here & there…but if he were to do all that – would he still be the artist he wanted to be, making the music he envisioned?  The answer is plain – probably not.  And so it goes.

There are many significant wins in “I Just Want You To Know” that we’d likely all universally agree on.  The backing vocals are a spectacular treat and you can hear a lot of talent to be found there…the violin remains a standout element of the music throughout, and the guitar really lights up a fantastic solo moment in the mix along the way as well…all of this stuff checks out in-full…we’ll all dig these pieces of “I Just Want You To Know.”  The rest becomes much more of a discussion & debate, and one always worth having in my opinion…I never felt like Harry was off the mark, but sure, there were many points where I’d wonder if he could have made his vocals resonate with a bit more power & passion behind the words to give it all the rich warmth we find in the music & backing vocals surrounding him.  My gut tells me he’s done what he can with the space that he has…and until there’s a bit more compromise between what he wants to say and the fluidity we wanna hear on our end in that regard, there’s a good chance he’s gonna run into this a few times.  I’ve got no real qualms here myself…I like the perspective that Blind Uncle Harry brings to his lyrics and I appreciate the sentiment he writes with – but at the same time, I can sure recognize that the choices he makes are a mouthful to sing & a whole lot to memorize.  The thing was though…I felt like it was the verses that stood out to me more in “I Just Want You To Know” for the detail in his words, as opposed to the more simple & straight-ahead design of the main chorus hooks…it’s because he’s willing to ramble freely and spill his thoughts so honestly that tends to interest me the most on a personal level.  Will everyone out there feel the same about that?  Doubtful!  To say the very least.  The last thing I’d ever want is everyone out there to agree with every single word I write though…so take that with a grain of salt & feel no pressure from my side of the screen & speakers.  Like what you like, love what you love, and if “I Just Want You To Know” qualifies, then turn it right on UP!

Find out more about Blind Uncle Harry from the official website at:  https://blinduncleharry.com