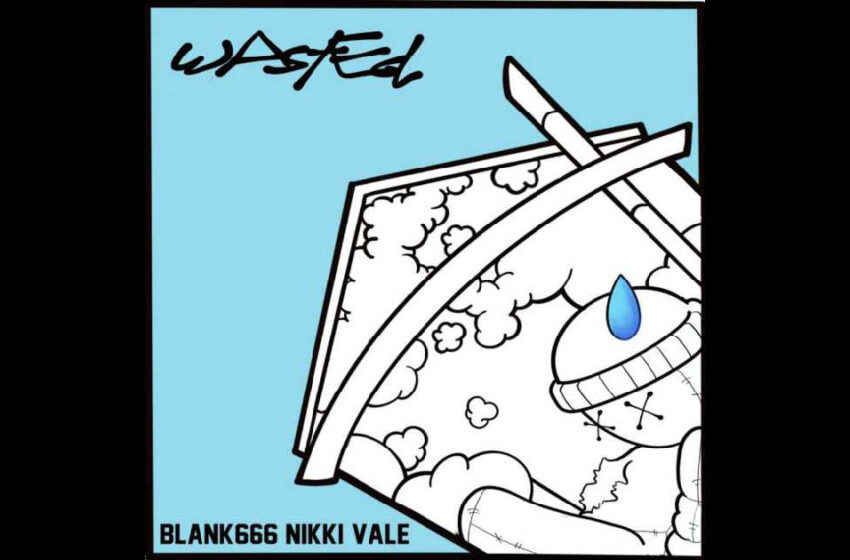 Took me a minute to figure it out though.  Don’t get me wrong…we’re halfway through our ninth year here…it’s not like the occasional artist or band doesn’t drift through without some sort of connection, but truthfully, the community we’re built here at The Bag often reveals one if you’re looking close enough.  I’d be willing to bet that we’re being introduced to BLANK666 now as a result of having reviewed the music of the one, the only, the legendary beast known as BIG KIDD from back in the day.

So shout-out to that man…y’all know he’s a champion – you can find him on what’s actually the latest single out there by BLANK666 as well, it’s a different collaborative cut than the one I’ve got here in review today, but it’s out there already online, it’s called “Bye Bye” (Remix),” & of course it fuckin’ slays.  I’m serious…no joke…put that track on and buckle the fuck up y’all – it’s literally larger than life itself.

Anyhow!  Always stoked for a new introduction, and I’m definitely interested in what I’m hearing on this highly addictive slice of sound coming out of Perth, Australia…which, if I’m not mistaken, is where you’d find the South African-born artist BLANK666 now residing in his own palace, chillin’ comfortably at the crib over at West Coast Studios.  Dude’s enlisted the assistance of Nikki Vale in the mix & on the mic as well – and between the two, they’ve collaborated to create a seriously tasty & single-worthy cut that I can only imagine at least half the world should have caught onto by now.  Technically, “Wasted” was released last year – but hell, it’s all-new to me y’all – & from what I can tell, it’s one of a series of singles that BLANK666 dropped in what was undeniably his biggest breakout year so far.  You can see a couple singles online that date back to 2019 before that…you’ll also see 2020 brought out an onslaught of new cuts from BLANK666…and from what I can tell, he’s already been hard at work this year crushin’ it with new stuff out there including the Undead Cesspool EP with Happy Killjoy, a solo single of his own called “This Is Love,” the remix I mentioned above, and another collabo with Nikki called “O.T.L” out there too.  You know I dig seeing this much activity goin’ on – clearly BLANK666 is kickin’ ass creatively right now.

BLANK666’s like, 22 years old and already running his own studio, workin’ with some of the top artists in the game right now over there in Australia – and from this one cut alone, “Wasted,” you can tell the man’s got a solid future ahead of him as both a producer, and an artist.  Mind you, I’ve checked out several at this point in learning more about the guy…so I kinda know a few things you might not just from this one experience…but that’s the facts Jack…our boy’s got skills and you can definitely hear them workin’ to full-effect from the music to the microphone.  Chances are you’d find BLANK666 in the same sections and on playlists with relevant sounds goin’ on in Machine Gun Kelly’s music or in good ol’ Post Malone’s stuff…you listen to a track like “Wasted” and it’s like instantly audible confirmation of a sound designed to work right in the here & now of what’s happening in music & what’s genuinely hot.  While I dig Posty…and have nearly no use for MGK personally…the hybrid style of sound itself from that multi-layered approach to Rap/Indie-Pop seems to be one that continually connects, not just to me, but to damn near everyone out there around the globe right now.  Can’t say I blame anyone either – it’s all highly melodic stuff coming out, and I’ve always been an advocate for melody making the biggest impact on us when we’re listening, or when we’re making the music for that matter – if it sounds good, and it feels good…well I mean, then that’s fucking great ain’t it?  Isn’t that really what this whole music thang is all about?  Personally, I’d put this right on Posty’s level, and miles above what MGK has been doing.

“Wasted” is a gloriously faded celebration of hittin’ the bottom with nowhere left but up to go.  Loaded with memorable hooks & what’s actually quite the endearing melody to accompany the twists in the  lyricism, BLANK666 gets the single rollin’ quick on solid ground, armed with a full complement of all-things-catchy.  Dude will prove he’s got bars too later on down the road, once he gets passed the mic from the homie Nikki Vale, who confidently takes the first set you’ll hear on “Wasted,” and delivers a stellar guest appearance that fits perfectly with the whole vibe BLANK666 was looking to create.  Vale waxes emotionally & binges on nostalgia, previous heartbreak, and a whole lotta Red Bull & alcohol in the process…it’s like the whole track rallies from rock bottom and surges with sound designed to take this collaborative crew straight to the top.  It all works brilliantly when it comes right down to it, video included – in fact, it’s a stellar pairing between the two that gets the most outta this cut overall.  You not only get the raw sincerity of this collaboration in the way they sound, but you can also see it onscreen as they’re rappin’ & singin’ with an authentically down-to-earth look at Nikki Vale & BLANK666 out in the open air.  “Wasted” onscreen proves that things don’t have to be extremely complex in concept to be effective – just shoot your shot & shoot it well, and you’ll get the results you’re looking for – these two have done exactly that, & made a video that completely connects to go along with a single-worthy cut.

Find out more about BLANK666 at Facebook here:  https://www.facebook.com/BLANKRAPS0

Find out more about Nikki Vale at Facebook here:  https://www.facebook.com/summerofnikkivale