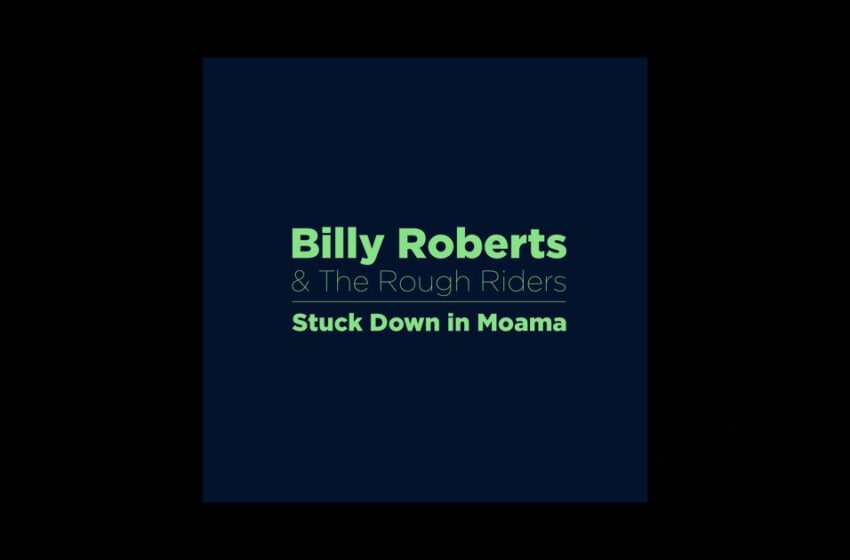 As I’ve maintained from day one, we’ve all gotta write about something.

Throughout the years, we’ve experienced the music of Billy Roberts And The Rough Riders in a whole variety of ways, even on the inside of what’s actually quite a defined & highly identifiable sound.  Over time, we’ve witnessed the music go from its earliest incarnations on The Last Of The Originals, to the more shiny & refined lineup he produced on The Southern Sessions last year, to more recent releases like his singles “November Pain,” “Broken Hill,” and “Don’t Understand” from earlier in 2021 – whether or not the tunes are something you dig on, regardless, you gotta respect the work ethic of this band.  They hardly leave my playlists for even a moment before it seems like Billy Roberts And The Rough Riders are back again with something brand-new to check out…I love that kind of inspired dedication.

It has been a tougher year for the man’s music in some ways…in others, it’s continued to shine brightly.  When it comes to the instrumentation, vocals, and overall performance on the new single “Stuck Down In Moama” – I think the band is just about as bulletproof as they’ve ever been…it’s essentially faultless.  I’m not even gonna argue against its inherent catchiness…it’s got a lot of that too – and I’d imagine for many out there, “Stuck Down In Moama” will have no obstacles stopping listeners from turning it up.  With respect to that, rightly so – there’s certainly much to be said about a song where you don’t feel like there’s anything lacking in the performance…from the twang of Tanner’s guitars, to the backup vocals from Sophia, the additional keyboards & banjo in the mix, and the grizzled voice of the main star of the show – Billy Roberts And The Rough Riders know how to execute when it comes time to push record.

Something was nagging at me though…seemingly preventing me from just automatically giving this cut the thumbs-up of approval without hesitation.  It really took me a while to figure out what it was, but eventually, I arrived at my destination and my thoughts became clear.  I realized that, well…I don’t really wanna hear a song about being stuck in traffic any more than I’d actually wanna BE stuck in traffic, you feel me?  Like I said right from the get-go…we’ve all gotta write about something – but there are still things to be considered…and I have to wonder if Billy might not have chosen a bit of an oddball subject to take on this time around.  There are other details within “Stuck Down In Moama,” yes – but there’s a lot of this track spent bumper-to-bumper in traffic…and I just can’t help but think to myself, Billy – of all the things in the world to write about, what on earth has got you writing about TRAFFIC my brother?  In a bizarrely, situationally-dependent kind of way, I think I could fully get behind the idea of BEING stuck in traffic, having this song come on the radio, turning it right up to the rafters in rebellion as I sit & wait for the congestion ahead to clear up…but outside of that somewhat very specific scenario…I’m not so sure!

So…I suppose lyrically, I feel like Billy Roberts is battling a bit against the odds with “Stuck Down In Moama” – it’s catchy…no doubt about that…I like the call & answer design of the chorus hooks a lot – but in terms of whether or not he’s got a song people feel they relate to & wanna turn up, or relate to it a bit too much altogether from living a version of this single in their own lives…that might all be another story.  It fits with the man’s blue-collar vibe and grounded way he communicates through music…in that regard, I can’t imagine the fans of Billy Roberts And The Rough Riders not being satisfied with what they hear.  I don’t know if it’s necessarily the single of all singles that’s gonna draw the people in…I think that’s also much more up for debate when it comes right down to it.  I guess what I’m saying ultimately, is that “Stuck Down In Moama” is a good Billy Roberts And The Rough Riders tune…but I don’t know that I’d go so far as to put it up there with the greatest I’ve heard, or feel like it’s really the band at their most inspired.  Had to fault a well-played tune…and in many ways I’m not at all – heck, it’s likely only because I know as much of the man’s music as I do that I’m able to separate what I love from what I like in his catalog at all…for many first-time listeners of Billy Roberts And The Rough Riders, “Stuck Down In Moama” would contain nothing worth musing over or potentially complaining about at all.  You’d hear a decent tune…an upbeat vibe, with contrasting lyricism that’s a bit on the gritty & grim side for how stuck in the mud the attitude in the words seems to be…but tightly played, well executed, and focused, 100%.  You’ll have to forgive me if I want a little more outta the man…I’ve ridden through the highs & lows with Billy Roberts And The Rough Riders for years now, and I have no plans of vacating my place on the bandwagon any time soon.  The highs & lows are a natural part of a creative life – the most important thing we can ever do is retain our discipline, push through the harder points, and find that motivation to keep going.  This band has never had an issue in that department, and so the story continues on – where there’s one tune that might make us question things for a moment, there’s another right around the corner for Billy Roberts And The Rough Riders that’ll exceed expectations.  “Stuck Down In Moama” might not be my favorite in the man’s catalog, but you’d never find me turning him off or turning him down either…so there’s certainly that to consider.  Ain’t no doubt that Billy Roberts And The Rough Riders do what they do very well – and bonus points for Tanner’s guitar solos on this particular single – but it does feel like they’re searching for that new road of inspiration to lead them on the path forward this year.  I have all the confidence in the world that they’ll sort it out…I have all the confidence in the world that there are still more than enough people that’ll love “Stuck Down In Moama” as it is now too – it’s really all about what kind of band Billy Roberts And The Rough Riders want to be from here at this point in their career, how they want to challenge themselves, and what goals they have left to conquer.

Listen to more music from Billy Roberts And The Rough Riders at Spotify here:  https://open.spotify.com/artist/1wC8JHZE7uERUK1qajiL4e

Tags: Billy Roberts And The Rough Riders Singles sleepingbagstudios Stuck Down In Moama