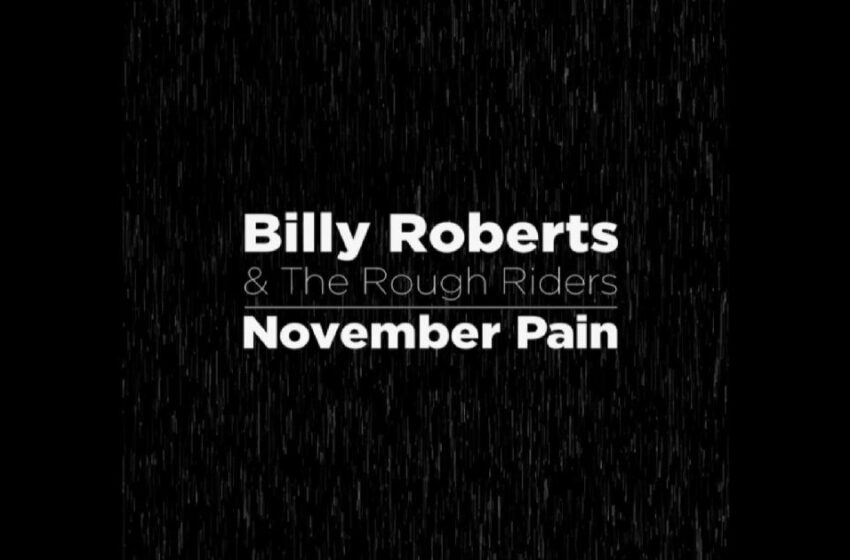 It’s a well-documented fact here at our pages – I’ve very much enjoyed listening to the music of Billy Roberts And The Rough Riders over the years.  From albums like The Last Of The Originals, to Go By Myself, to the record that landed them in our top ten last year called The Southern Sessions – and all of the many singles I’ve checked out in between like “Today,” “Little Johnny,” “Don’t Understand” and more – this dude’s always given us plenty of reasons to listen and really come into his own over time.  The players along with him have shuffled throughout the distance of that journey, but many names return, and new ones consistently pop up – Billy Roberts is never short on folks that wanna play with him.  That alone should cue y’all into what the spirit in this man is really like deep down inside – yes he’s got a personal point of view and insightful things to say on his own, but when it comes to the art of making music, he’s actually got quite a collaborative way about him that suggests he’s a really nice guy.  Don’t let the grizzled gruffness of his vocals fool ya – Wild Bill here is a man built of true grit and heart that money can’t buy – and if you’re lucky enough to be in his orbit, you’ve sincerely earned his respect.

He’s developed himself into a spectacularly sharp songwriter, and his latest tunes certainly speak to that, “November Pain” included, of course.  Roberts excels at creating real grassroots, blue collar, ‘working man’s’ type-vibes, and more often than not, his lyricism wrestles with emotional conflicts and thought-provoking themes that give you a genuine glimpse into how he views the world around him.  Consider the man to be a master of objectivity & observation really…I reckon if you were to ask Billy himself, he’d tell ya he’s doing nothing more than documenting what life is like to live it, through music.  “November Pain” is laden with lyrical imagery that feels like you just got out of the quarry covered in an inch of dust; almost like the lament of the working class and an ode to those that always move forward, no matter what obstacle or struggle they face in their way.  It’s a really stoic & steady tune that’s built of steely resolve and conviction, like an acknowledgement of the fact that the “November Pain” of today is still gonna be around tomorrow, and there’s still work to be done, regardless.  As he sings out “can you feel, can you feel…” into the microphone, there’s not much else to be said – indeed Billy, yes we can.  It’s a highly sensory moment in this new single by Billy Roberts And The Rough Riders, and ultimately it’s the real key to winning over most of you out there listening – the stellar hooks are delivered perfectly.

Vocal-wise, I dig this man’s voice and I always have – no hiding that.  I think Roberts does a great job in drawing out the melody on “November Pain” and he’s continuing to bring his best to the microphone – I’m loving that for sure.  The more confidence he’s gained through time & experience – the more he’s believed in what he’s capable of – the better the results have consistently been, year after year – the proof is in the pudding, as they say.  Instrumentation-wise, “November Pain” is absolutely outstanding, flawless, and outright spellbinding at times without question…there are many hypnotic qualities to the way that this song is played that allow us to sink right into it, and drift away with the melody on repeat.  Tanner Lindsey crushes it with his lead guitar and adds in the crystal clear production you hear, Rory Facione is as on-beat, precise, and full of technique as ever, Billy’s keeping the rhythm guitar in-check – and even after ALL this great stuff goin’ on that I’ve mentioned – it’s Lauren Abels that very well might steal the entire show for everyone out there listening this time around.  Putting in an enchanting & bold performance in on the violin/fiddle – you couldn’t ask for one iota more than exactly what she gives you on “November Pain,” filling in the surrounding atmosphere with tangible emotion & texture we can feel.  Truly, she’s sensational – I could hardly take my ears off of her!

Now…a couple things can be true here.  I’ll readily concede – unless you get excited about a really well thought-out tune & songwriting like I do, “November Pain” might not be that top-down driving summer single many of you are seeking out at this time of year…in case the title hasn’t tipped you off.  It’s a mid-tempo tune, and I’ve never made any bones about those always specifically being a much tougher sell to the masses out there, that’s just the nature of how people listen.  If you’re the type to get right into your headphones, or you’re the type to spend a couple hours a day listening to all kinds of music, a band like Billy Roberts And The Rough Riders is certainly for you, and again, especially lately – the songwriting has been brilliantly focused, and the music impeccably executed from performance to production.  If you’re naturally resistant to the mid-tempo pace of music like many tend to be, Billy’s got a chance to win you over through sheer quality.  So yes – a track like “November Pain” can be a really strong song, yet not the most exciting at the same time – and there ain’t a thing wrong with that whatsoever.  My gut tells me it’s gonna take folks a few listens before the fully appreciate the magic of the melody at work in the hooks of this new single; I’d say “November Pain” is the kind of cut you’d find somewhere in the latter half of a full record, providing that reliable strength to be found in great songwriting, before ramping up the finale towards the end.  I don’t know it for a fact, but as of late, the music & songs of Billy Roberts And The Rough Riders really seem to revolve around cohesive themes and a distinct sound…I’d have to imagine that in behind the scenes over there in Australia where he’s based out of, plans are in the works for that next upcoming record soon enough.  Anyhow.  Other than the mid-tempo thing, I think the only other obstacle a song like this has, is right there in the title itself…and how 99% of the people out there listening are going to wonder if it’s some kind of take on Guns N’ Roses’ “November Rain,” which thankfully, it ain’t.  But I did start to ask myself…what might make “November Pain” more significant than the pain featured in any of the other months that we’re livin’ in?  Geographically speaking, I have no clue what’s goin’ on over there in Australia in November – maybe that’s just a month unlike any other – I couldn’t tell ya for sure one way or the other…I’m living one big massive day that never ends – I’d be the last guy to ask.  I trust in what I hear, and in songwriters like Billy Roberts that can cut to the chase and get to the heart of a matter with an unfiltered, raw, and honest perspective – and if he’s tellin’ me that “November Pain” is a real thing, I’d be mighty inclined to listen, especially when it sounds this good, this vivid, and this real.

Find more by Billy Roberts And The Rough Riders to listen to, stream, and purchase at Apple Music: