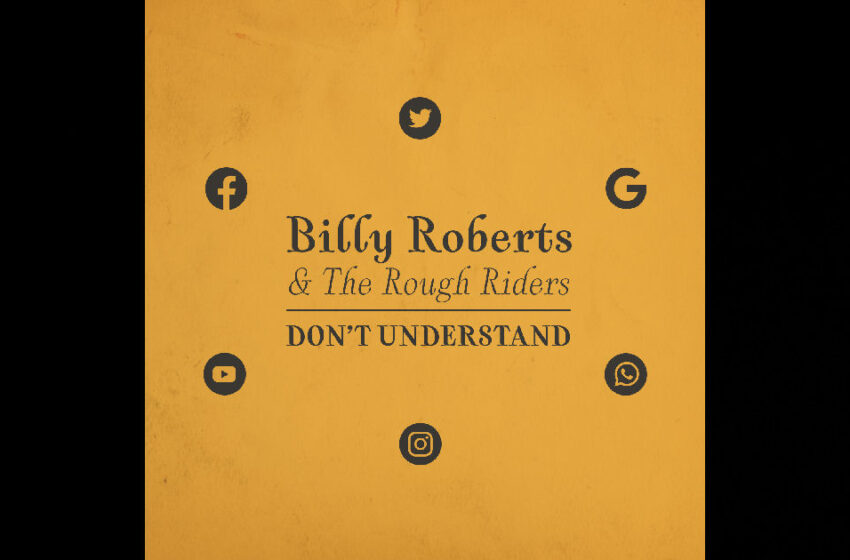 I think Billy Roberts has written a really important song here that a ton of people out there are going to genuinely appreciate.  Not that this is unexpected mind you, the man & his band did crack our top ten of 2020 after all; Billy Roberts And The Rough Riders have indeed been climbing to the heights of their craft and releasing a treasure trove of excellent music over these past several years.  All indications have pointed towards this band getting stronger & stronger from day one, all based on the strength of their sound, gripping songwriting, and the gruff charm of its main centerpiece, Mr. Wild Bill himself, really coming into his own over time, locking right into what they all collectively wanted this band to become.  Rather than bend to the popular will of whatever’s floating on the mainstream, Billy Roberts And The Rough Riders have been more than content to thrive below the surface and stay true to their vision without breaking – they’ve been patient in allowing the world to catch onto what they’ve been coming up with and their own signature style, as opposed to changing up what they do to suit the masses.

I’m highly interested in “Don’t Understand” for several reasons, none the least of which is, this being the most I’ve heard Billy Roberts And The Rough Riders throw their hats into the political realm.  That’s not to say there hasn’t been social commentary of sorts along the way scattered here & there throughout the catalog – but you’ll have yet to hear the perspective & point of view put forth as directly as this is.  And while great songwriting can come in many forms and doesn’t always have to necessarily belong to the point of view of its creators – I’ve never known Billy Roberts to really do anything other than tell it exactly like it is and sing his truth, whether ya like it or not…so chances are, “Don’t Understand” reflects his own personal perspective on what he’s singing about in this here new single.  There will undoubtedly be a vast many of you out there that’ll find you agree with much of what he’s saying on “Don’t Understand” – and for sure, that’s definitely to be acknowledged – but to me, it was the emotion behind the meaning in these words that most often hit home.  Because although I’d likely be found on the polar opposite side of the fence when it comes to this tune’s political commentary, I do absolutely connect with that immense feeling of frustration, isolation, & all-out confusion that comes with feeling like you “Don’t Understand” – and perhaps more importantly, I’ve thought about it more than enough to know how it impacts the many people out there that have been feeling this way even more over the past several years.  Change is never an easy thing, no matter how you slice it; but when the world is changing around you and you just want it to stay the same, what do you even do?  Progress can often equate to a feeling of powerlessness for people that we don’t often see, acknowledge, or come close to trying to attempt to understand – and ultimately, it’s songs like this one here that remind us how important all that really IS.  I am always supremely confident that the overwhelming majority of us fundamentally all want the same things – we just tend to yell about them in different ways that realllllllllly piss the other side off all the time now – but if we can get back to that point where we can at least see that common ground, and remember how crucial it is to both move forward, but not leave anyone behind in the process…maybe we reach the balance we’re all genuinely seeking out and a peace that heals the division.  Because that’s just about the only thing I “Don’t Understand” myself…those that seek out to divide; I get its appeal, especially on a political level…but good gravy…that can’t be the world anyone out there really wants to live in, is it?

I’m confident that’s not what Billy Roberts And The Rough Riders are saying in this single either, for the record – in fact, it’s that frustrated emotion communicated so effectively through the vocals and lyrics that directly tells you it’s not being intentionally divisive at all, just real.  Polarizing perhaps, but fuck – art and music SHOULD be challenging, at least from time to time – and authenticity should be standard.  I never have any issues with opinions different other than my own and I never claim to be right about everything I think by any stretch of the imagination – all I ever ask is that people have the courage of their convictions and believe in what they say & do.  For people like Wild Bill, all this comes naturally; and give the man credit where credit is due for taking the all-important step of communicating how all this shit makes him feel – without one side ever understanding the other, we’re all doomed to fail – and like I’ve been tellin’ ya from the get-go here, what Billy Roberts And The Rough Riders have created in “Don’t Understand” bridges that gap insightfully, by not pandering, just simply explaining, objectively.  You may agree, you may not agree, you may like the song with or without its political aspects – but at the end of the day, you gotta respect a guy like Wild Bill for not shying away, ever, from what makes him different from the rest, saying what he wants to say, or his understanding of how the dynamics of this planet have pushed him from being in that majority he once knew, into the minority just trying to hang on to the world they know.  No one out there should begrudge anyone for feeling the way that Billy Roberts explains so expertly through the lyrics of “Don’t Understand” – to me, this makes perfect sense.

Even beyond the political angle, there’s an extremely well-crafted song, executed smoothly from start to finish that many are bound to enjoy on a surface level without even digging into the added layers of meaning applied through the words – “Don’t Understand” sounds excellent, that’s the facts.  Love the bare opening and the sliding guitars gently gliding through the background, love the sparkle of the acoustic, love the way the song expands, the guitars get crunchier in tandem with the rest of the musicianship coming to life along with it – they’ve got this cut structured to deliver reliably, frame by frame & bar by bar as it plays.  Controlled & professional, thought-provoking & entertaining as well – “Don’t Understand” smolders with sly cool and stellar sound, slow-burning its hooks and epic finale through your speakers with impressively welcoming vibes and dynamic instrumentation.  Make no mistake, just because I might not personally agree with everything that’s being pointed out in this song isn’t going to stop me from declaring that this is yet another highlight single to be found in the Billy Roberts And The Rough Riders catalog – a section that has been growing exponentially over these past several years.  The best I can say is, you’ll get it when you hear it – “Don’t Understand” is built on engaging sound & lyricism from start to finish, the performance from every player is spot-on, Billy sounds as inspired as ever in the finale, and he does an exceptional job harnessing the real emotions & frustrations he’s singing about in the verses.  Essentially, you can’t argue with bulletproof songwriting & execution when you hear it – and Billy Roberts And The Rough Riders are supplying exactly that to every one of ya on this stellar single.

It’s important to listen to what’s being said here, and even better if you can do your best to understand “Don’t Understand.”

Listen to more music by Billy Roberts And The Rough Riders at Spotify here:  https://open.spotify.com/album/58APhpziPqHvkrXSQGDUQv