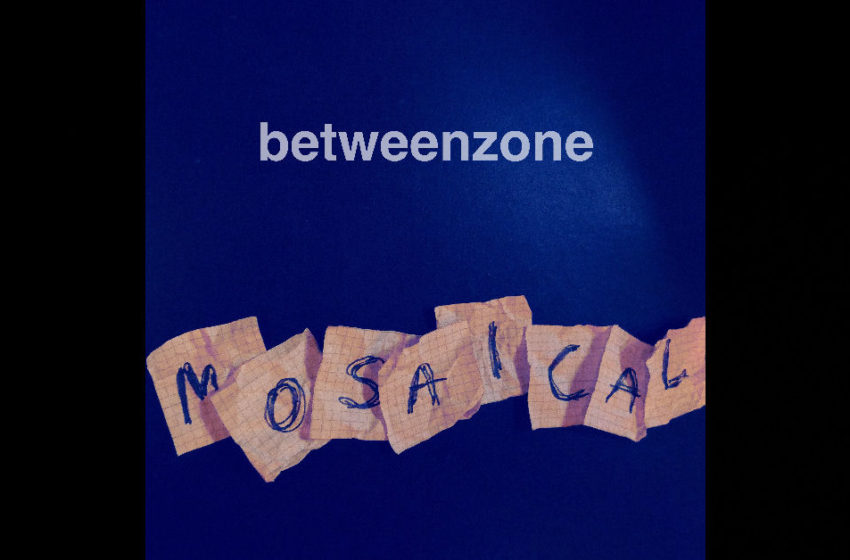 Perhaps to understand what it’s like to push play on a new record by Betweenzone, you kinda have to know a bit about the history of this ride they’ve kept us on.  Or at least from where we jumped in, which was around 2018…admittedly they’d already made several tunes & records by that time, many of the songs of which ended up on their anthology set called The Early Works (1996-2000)…the point is, I’ve been listening for a while and I still have no clue what to expect from this duo whenever they pop onto my playlists.  I’ve heard a range of sounds & styles from heartfelt ballads, to colorful Indie/Pop, highly experimental tunes, and innovative ideas of all kinds…Betweenzone never seems to sit still for very long before they’re onto the next project.  Considering the outstanding quality that comes with their material every single time, you gotta admire the sheer speed & work-ethic possessed by band members EAST and Dave M. Rile – the music they make comes out at such a rapid rate based on their own genuine interest.  Betweenzone is one of those crazy bands that actually WANTS to make music as much as possible – can you even imagine such a notion?  Yet here we are – they’ve returned with new tunes already in 2020.

Back in October of 2019, I reviewed a track called “Mosaic” by Betweenzone…which from what I can see online, the song has since disappeared.  Now…I could be wrong about that – but I can’t seem to find it.  As a staunch collector of absolutely everything I’ve ever been sent as far as music is concerned, I was able to track down “Mosaic” in my archives here and confirm that I wasn’t crazy in feeling like I had heard parts of the title-track of their new EP in the past somehow, which I had.  Like many of you out there do from time to time, I’d assume that Betweenzone was likely testing the waters at the time – they definitely had a wonderfully adventurous tune in the original “Mosaic,” but clearly still felt there was something more they could bring to it.  And after a quick comparison here, it certainly sounds like this song got the update it deserves, especially in the thickness of the low-end and production overall – “Mosaical” sounds remarkably clear and vibrant.  Part of that of course, is due to the insane amount of ideas and incredible skills you’ll find Betweenzone puts into this enormous song – just shy of twenty-minutes in length, “Mosaical” practically plays like its own album with an Inception-esque level of ideas-within-ideas-within-ideas as they morph & transition the sound of their title-track with award-worthy creativity and commitment.  I didn’t exactly go back & listen to the old “Mosaic” and the new improved “Mosaical” side-by-side to hear each and every change they’ve made – but I can definitely tell ya without having done that, that Betweenzone has tightened this track up in all the right ways.  There is obviously no arguing against the highly experimental approach they’ve taken here in terms of whether or not it would fall into any kind of typical genre or category…it’d be tough to put Betweenzone in any kind of box here, nor would you be able to find one big enough to house everything they’ve included in this ONE experience.  While that may present a few more challenges to the everyday listener USUALLY – I felt like Betweenzone really beats the odds here with extremely clever composition and all-out stunning execution…everything you’ll hear on “Mosaical” is so damn interesting and well-mixed that your ears would get up and leave your face in protest if you tried to walk out on this wild entertainment.  This should be the kind of savagely ambitious creation we all wanna hear – and not only is it built to satisfy just about every music-head and audiophile out there around the globe, but you’ll also hear Betweenzone slide right into multiple moments where there are undeniably accessible hooks that people can latch right onto as well.  And that’s where the structure & songwriting here really play a very significant role…it’s completely because Betweenzone has got this mapped out into sectors that give “Mosaical” a genuine shot at grabbing the attention of listeners with each & every part having its own unique appeal.  Each moment leads brilliantly into the next in unpredictable, bold, and genuinely exciting ways…I suppose what I’m saying is that for a song that’s nearly twenty-minutes in length, you’d almost never know it – Betweenzone keeps you completely engaged and 100% interested at all times.  I think they played this track very smart…I suspect they went back in between the original “Mosaic” of 2019 and took a good look at what worked and what could be improved, then made those changes happen, and the rest of the story is right there in the proof of its existence today.  “Mosaical” is one of those types of tunes that sure doesn’t come around every day in music’s culture…and when you hear the incredible journey a song like this is capable of taking you on, you’ll really wish there were more to be found out there in the scene, or at the very least appreciate the rarity of what Betweenzone is doing.  Unlike a lot of what is coined as ‘experimental’ out there in the musical universe, you’ll find that “Mosaical” succeeds where other songs in this department do not – you’ll discover one tight AF tune that is mammoth in proportion, with insightfully progressive tendencies, & stunningly accessible sound.

You can definitely hear the energy about to start surging quickly as the second track on this EP begins – you can audibly hear it building & surrounding you as “Contamination Procedure 2020” starts to flex its creative muscles and electronically-inclined atmosphere.  Betweenzone goes full robot on ya with the vocals as this cut shifts into gear…likely fairly inaudible in a word-for-word sense, but pretty damn essential when it comes to the overall vibes they create on this track.  Definitely a fast mover & a slow-burner at the same time, Betweenzone is exploring the kind of dynamic, neon sounds that would have easily earned them a spot on the Tron Soundtracks back in the day.  Either of’em, I’m not picky; the original or the remake.  And then…right as you’re convinced they’ve got this cut jammin’ to its max capacity – LISTEN to the way the guitars come in with scorching & intense tones that completely light this track up as it heads into the fourth minute.  You get to ride that out for about a minute or so, and that guitar contributes to a crucial moment of awesomeness that is bound to have people coming back for multiple spins…because it is MASSIVELY addictive.  When it shows up again around the sixth minute, you really start to piece together what an impact it made before, and then every time you’ll listen to “Contamination Procedure 2020” thereafter, you’ll freakin’ CRAVE it and anticipate it coming back.  Thankfully, it will once more before all is said and done…it’s just got such immaculate tone and expression that it is straight-up off the charts cool, end of story, full-stop – I could listen to the guitar light up “Contamination Procedure 2020” all day every day and twice as much on Sundays.  With so much else going on, and so much else going on RIGHT…I gotta say, this was wildly impressive and a whole lotta fun to experience.  And I’m sure I won’t be alone in this assessment…not when it comes to this cut, or “Mosaical” beforehand…there is definitely an audience out there for music as inventive, exploratory, ambitious, and expressive as what’s happening in Betweenzone right now, I guarantee it.  You listen to a tune like “Contamination Procedure 2020” and its wickedly mechanical groove and try to convince me otherwise…there are extremely rad ideas being fused together flawlessly throughout Betweenzone’s latest EP – quite truthfully, there are more than enough ideas within these two songs to fill a normal full-length record multiple times over.  Somehow they’ve managed to pull off a cornucopia of sound you couldn’t possibly take your ears off of, and they never let the momentum stop surging throughout this record.  It might only have two titles in the set-list, but make no mistake, these two tracks are monumental achievements and serious highlights in the Betweenzone catalog to-date.

If they keep pushing the boundaries of creativity, art, and music like this, you better believe I’m gonna keep on listening to this band for years & years to come.

Find out more about Betweenzone at their official pages below!