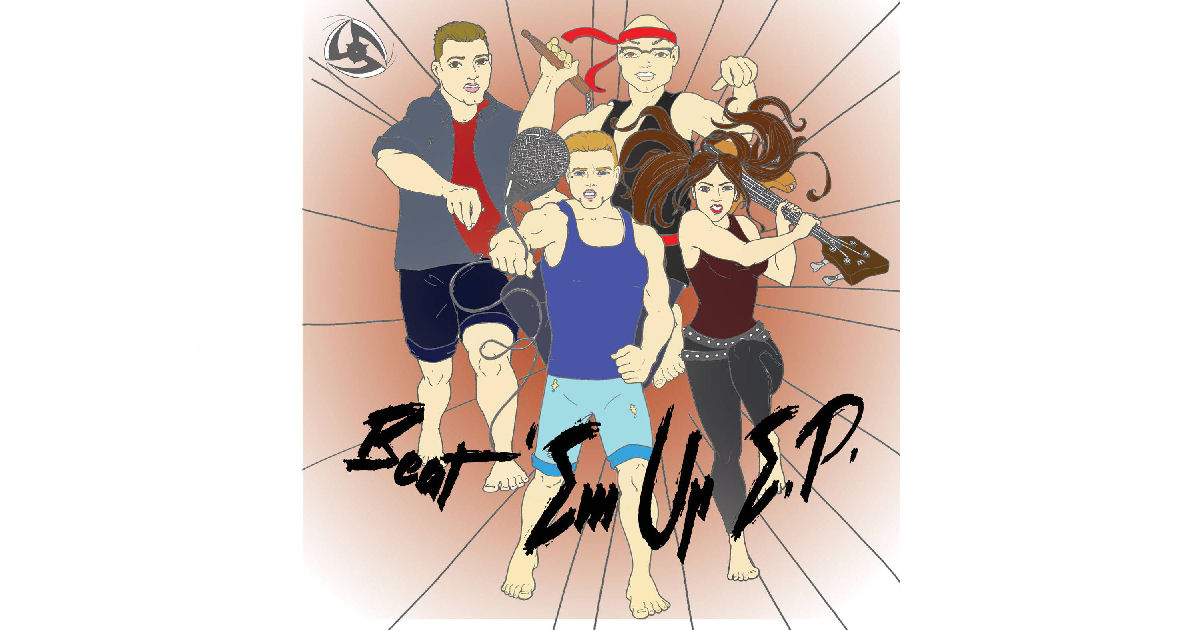 Between The Void – Beat’Em Up – EP Review

Ohhhhhhhhhh Between The Void – you lot have gotta be stoked on how this EP came out eh?  Definitely a band I remember from back in 2016 when I reviewed their self-titled record and discovered their barnstorming energy for the first time.  Been a great month for Rock here at the pages really…we’ve seen the beginnings of the comeback of the ultra-slick Convey, been introduced to Alt/Grunge of InCrest and now here we are again, only days later, with more from the genre that’s actually worth listening to.  Kinda nice to not have to be so harsh on Rock for a moment or two & listen to it being done right.  Between The Void was sounding great before when I last heard’em…I certainly remember being highly impressed…and I also remember making more than a few comparisons to Incubus along the way.  No disrespect to either band – but I’m extremely happy I don’t have to pull those out this time around.

Because you see dear readers, dear friends…we once again have a bold case for evolution.

I think that Between The Void has done an exceptional job of really cementing their own identity over the course of this EP in new ways that were yet to be explored on that self-titled record.  Don’t get me wrong, that album’s loaded with quality tunes…but these four new cuts really speak to the band’s own blend of wild Rock & hard-hitting style…everything in this lineup came out supremely tight and seemed to really speak to the fact that when this band truly goes their own way, they end up producing the best results.  Not a dead spot on this record and some serious highlights for the UK’s Between The Void.

Diggin’ the videogame vibes that start up their title-track as “Beat’Em Up” begins – and absolutely loved the way this four-piece exploded into the instrumentation before the verse even started; talk about sounding like you’ve got something to prove – Between The Void comes out swinging HARD.  What’s seriously impressive about this particular cut though, is that they’ll incorporate a noticeable amount of Funk & flash to the sound of “Beat’Em Up” along the way as well.  Even if you were deaf you’d hear this!  Plays tightly on a thematic level as well…from the opening videogame intro to the personality in the backing vocals breaking through, to the cover of the EP itself, it’s like they’ve created their own anthem for ass-kicking.  I mean, if you spent your youth playing a few videogames here & there, you’ll bloody well know that the intro to “Beat’Em Up” virtually implies danger.  They’re heading into territory you’d expect to find Faith No More in on this tune – and it’s a sound that I gotta say, Between The Void, is wearing extremely well.  This jacket fits.  Fantastic mix of ideas and skills on display here, wicked hooks in the vocals from John Eales and a real highlight early on in the new EP that shows what a brilliant singer he can be as he switches his energy & tone up alongside the music.  As they storm through the brutalizing intensity and scorching heat on “Beat’Em Up,” they break it down just as cleverly and soar straight into a truly jaw-dropping finale, full of gripping instrumentation & musicianship that shows what a powerful sonic force this four-piece has become.  Seriously killer start and an all-out smart tune that has multiple access points for the masses out there to chew on…an excellent first impression of this EP.

Personally, “New Republic” was the cut for me in this supercharged set of four electrifying songs on the Beat’Em Up EP.  Ain’t gonna lie to you of course, if it’s accessibility you’re ultimately looking for, you’ll probably find more within the title-track or even “White Gold” following “New Republic” – but if you’re looking for a killer combination of hard-hitting sounds, impressive instrumentation, and inventive ideas, chances are you’ll dig this second cut as much as I did.  I mean, first of all, again, dig the tunes on the last record, but in terms of production, I felt like this EP was a huge step forward in that direction as well, which counts for a lot when you consider just how hard the punch of sound on “New Republic” will repeatedly hit you with.  It’s a thorough but oh-so-enjoyable beatdown I’m more than willing to receive.  John and Oli Frame’s guitar work is seriously amazing on this cut…there’s just so much incredible depth for your ears to dig on when it comes to how these two play & interact in their material…very reminiscent of something like Quicksand on this track, which is more than cool with me.  They’re working with such a savage chip on their shoulder throughout this song, which essentially has a couple main parts to it, dividing the experience in half somewhat, but altogether one seriously cool cut.  In the bulk of this tune from the beginning to just about the two-minute mark, you’ll get killer vocals from Eales once again and enormous effort from the rhythm section to assist in the energy & hooks you’ll hear – big ups to Pippa Gillingham for crushing it on the bass and to Marc Canning for beating the drum skins into the next millennium.  We’re talking seriously mean and monstrous sound in all the right ways when Between The Void gets gnarly in between the main vocals & hooks the front half of this track offers…and that switch into the final ninety-seconds or so of instrumental beastliness was a brilliant move.  You essentially get the best of both worlds on this track…you get the hooks & vocals up front to pull you in, and then you get a wild dose of the instrumental backbone that holds the music of Between The Void together so perfectly.  They drift into it slowly and gently…but you know it ain’t gonna stay that way – they EXPLODE at the end of this cut and turn “New Republic” up like a middle finger to the establishment.  Great meanings & social commentary in the lyricism & multiple ideas in the music morphing, shifting & transitioning with resounding authority, bold sound, and remarkable balance in the music – this whole experience with “New Republic” is 100% killer.

As far as what’s current & what’s out there right now, “White Gold” stands a great chance of making an impression with the masses out there.  Not only is Between The Void shifting into a more scorching-meets-melodic modern-day sound, but they’ve also clearly put a bit of extra heart into this tune, which is actually written about a hero helicopter pilot/animal activist, Captain Roger Gower, who was tragically gunned down while trying to stop elephant poachers in 2016.  No random coincidence or chance inspiration that they wrote this tune and brought their A-game to it in a remarkable tribute – this horrific event hit too close to home for the band; Gower was a good friend of Oli from Between The Void.  It’s always somewhat of a risk to put the meanings of a song out there…or at least, that’s the old-school thinking and still on a lot of singer/songwriter minds out there today.  Believe me, I talk to a ton of’em daily and it’s nearly either one or the other; explain everything or explain nothing.  Personally I’m on the side of letting the fans in, giving us that context, and allowing for those insights to be shared; I think it matters altogether when it comes right down to it, but I think you’ll also hear the difference it made with Between The Void’s “White Gold” as well.  They lighten-up a bit when it comes to the sound of “White Gold,” by comparison to the first two barnstormers – but you get a different kind of focus on display as well as a different approach to this third cut, which will honestly help broaden their audience even more.  Like if you’re a fan of the band Vaultry…or were rather, before they broke up, this track will remind you of something you might find on their album Eulogy…”White Gold” has that similarly restless but powerful style that’s built of many styles really, surging between them all, effortlessly & flawlessly.  No doubt that it still has harder moments musically and emotionally as well, but that more brightened sound also reflects the added heart & sincerity that the band plays this tune with.  Very strong cut.

“Jeff The Unicorn Got Hooked On Spice And Became A Rhino” – yeah ummm.  I might have a problem with this.  You know, as a person that has known far too many unicorns that have been hooked on a savage spice habit & all…I just don’t know how I feel about Between The Void outing Jeff so publicly, that’s all I’m saying, seems a bit harsh.  Other than that, the song seems pretty killer.

All jokes aside, they collectively slay this last tune in a true finale style that this short set deserved.  I mean look…I have NO IDEA what kind of wacky inspiration ends up creating a title like “Jeff The Unicorn Got Hooked On Spice And Became A Rhino,” but I can show you a great many bands out there with titles that are way out in leftfield that reveal incredible tunes in behind them like this one from Between The Void.  What I CAN tell you about songs with titles like these…and I’d be more than willing to bet you’ll discover this to be true – a crazier title will often be given to highly ambitious, innovative, imaginative sounds that are…well…different.  And I mean that in a good way…lemme explain.  Quite often those titles act like a shield somewhat, to deflect as the band pushes themselves harder and more creatively than perhaps they would typically…I also think that for reviewers like myself or listeners out there that get right into the stuff they listen to in whatever genre it is, you learn about these tiny threads that hold the music-scene together in different ways.  The bizarre title almost always leads to something worthwhile to listen to in my opinion…it kind of visibly implies that what you’ll hear is off the beaten path, whether that’s to the band themselves or to the world at large is probably different case by case.  Anyhow…there you have it…that’s the theory I’m sticking to anyhow…I like to think that when you hear “Jeff The Unicorn Got Hooked On Spice And Became A Rhino” that you’ll get where I’m coming from.  There’s an extra layer of Post-Punk in the vibe of the vocals and their reverb-laden mix, which personally I think sounded excellent on this tune…everything about this structure is vibrant and alive, dynamic and as always, powerful.  Eales has exceptional highlights in the chorus of this tune, hitting his biggest moments on the Beat’Em Up EP spot-on, bringing out that extra edge in his voice and seriously killer notes in the chorus.  “Jeff The Unicorn Got Hooked On Spice And Became A Rhino” is the audio-adventure that you’d hope it would be, with plenty of chops & instrumentation joining the fun towards the end, a blazing guitar solo that gets more & more involved & amazing as they speed towards the end, rip through the main riff & bang on them drums a couple more times, and leave with nothing left to be said.  Between The Void put together four cuts that deliver the goods – you can’t argue with quality, ideas, and execution like this crew has on the Beat’Em Up EP – it’s awesome to have’em back to rock 2018 the way it should be and excellent to hear them take their music that next-step further.

Find out more about Between The Void at their official page at Facebook:  https://www.facebook.com/betweenthevoid

Tags: Beat'Em Up Between The Void EP sleepingbagstudios