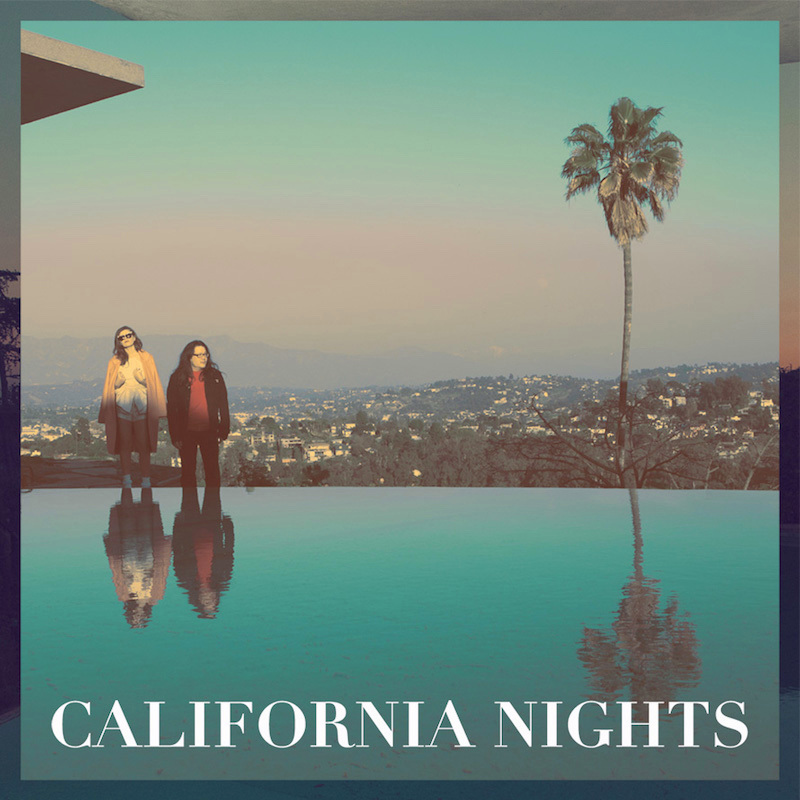 Best Coast are back with a brand-new album just in time for summer and no doubt the people out there have been waiting to put this into their headphones since 2013’s Fade Away. A lot has happened for this band since busting out hard into the scene at the turn of the decade; Best Coast have distinguished themselves as true indie heroes that have found their way to rise above the challenges and bring their lo-fi melodies into the mainstream. Unsurprisingly – the new Best Coast record, California Nights, would be pretty hard for anyone to resist with the sweet pop-sentiments masked & disguised by post-grunge ideals. And for a guy like me carved & cut straight out of the grunge-era…this is pretty much an instant win for my eardrums and Best Coast are consistently solidifying their place on my playlist with this new record, California Nights.

I’ll say this…it’s more like a guaranteed lock on their spot at this point – the new album is pretty much brilliant from start to finish and a ton of what us grungers miss most is laden all over this album. Crunchy guitars, simplified riffs and a truly natural sound – Best Coast have gone on to make California Nights seem as effortless as sitting on your porch and watching the sunset. And BECAUSE of that…their laidback vibe is producing their tightest and most focused record to date – I LOVE this album!

The first track sets the stage for the melodic direction and stunning, crunchy guitar work of Best Coast. Bethany Cosentino and Bobb Bruno have taken those next steps forward and “Feeling OK” starts it off with a fuzzed-out melody that sparkles, shines and drags in a charismatic & warped kind of way that really makes it have a comforting feel. Bethany has such a masterful grip on her voice and how to use it & her vocal-flows are charming, catchy and roughly-sweet like in “Fine Without You” or the up-tempo blast of punk/pop in “Heaven Sent.”

I’m a huge fan of the way this record sounds…the recording itself is such a throwback to a time of real freedom and purity in music…when musicians really let themselves go and didn’t worry so much about perfection. The result in that attitude of wild-abandon usually WAS a type of perfection – and it IS again here on California Nights.

The rhythmic hooks are so incredibly well-put together; if you can resist the pull of a melody like you’ll find on “In My Eyes” you are a far, far stronger person than I. Distant but swirling with an absolutely captivating pop-inspired melody – Best Coast nearly catches onto the alternative/pop recipes of Metric here on “In My Eyes,” but man does this track WORK! Loving the old-school guitar-solo here…it’s so damn grunge-era it hurts! It’s like four-bars and as simple as it gets…but California Nights seems to be an album really steeped in not over-complicating and simply getting it RIGHT. You could almost hear Best Coast borrowing a little more from the following tune, “So Unaware;” this is nearly a Weezer song in disguise with its nod to early rock’n’roll infused with big modern-day distortion and one of the sweetest vocal-melodies to grace the album. Believe me – I’m NOT complaining – I love Weezer too…but if there’s one thing I love easily more than Weezer, it’d be pretty much ANY female-driven band from the grunge-era; and “So Unaware” becomes just about the best possible fusion of these aspects of music as I could ever hope would come my way.

Like any album, some songs will standout more than others…and it’s always tough for every song to standout on an ALBUM-FULL of standouts…know what I mean? Middle tracks like “When Will I Change” and “Jealousy” will gain more support from your ears upon repeat listens; Best Coast isn’t wandering off at this point in California Nights, but the energy does take a slight turn in the middle of the album. As they head into the album’s title-track…they continue somewhat in the same downbeat melodies until this song finds a mid-size explosiveness through the haze and comes to life in ways that are as bold as they are beautiful. You have to appreciate what Bethany is doing on “California Nights” as she is really belting it out with precision, clarity and unique & flawless tone delivered with confidence. A somewhat psychedelic and hypnotic groove all throughout…this departure from the pop-sound pays off huge for Best Coast here as they execute this title-cut with a real sense of artistic care; like it was handled with extreme caution – like this song HAD to come out right…and it certainly did.

And I’ll admit…it did make the comeback to the pop-inspired sound a little tougher when “Fading Fast” started out – but that feeling was soon replaced by “Run Through My Head” which restored the genius, energetic & melodic rock vibe of the early half of California Nights. Costentino sings with real emotion inside these stunning atmospheres and the clever guitar hooks from Bruno are relentlessly catchy…the combining of their talents is at its best on tracks like “Run Through My Head” and the focus on their song-writing is noticeable on songs like this. I’ve been half-into Best Coast up until this album…to me – California Nights is the album that has finally sold me completely on this bands ability to really capture the interest and captivate the imagination – now they’ve more than likely got me as a fan for life.

Well! Thank you Best Coast…I just learned something! The opening melody line of “Sleep Won’t Ever Come” reminded me of a song I couldn’t place that I actually just looked up…and believe it or not, turns out it was The Rolling Stones! I honestly had NO IDEA that “As Tears Go By” was one of their songs…but there you have it. Now obviously The Rolling Stones sound much, much different than what Best Coast is doing – but Bethany sounds like she could launch into this hit from the sixties at any moment. She manages to keep the flow headed into new territory of her own and as a result, “Sleep Won’t Ever Come” reaches a fantastic point where it becomes like a clever combination of the artistic nature of the title-track meeting the pop-ideals of the early-alternative sound from the beginning of California Nights. Or in other words – “Sleep Won’t Ever Come” is like one big fantastic sampling/smorgasbord of everything Best Coast is doing incredibly well.

“Wasted Time” puts an airy & atmospheric aspect of Best Coast on final display as the album fades out upon itself. Much like the denouement to your climax…this last track eases you out of your Best Coast experience like it’s gently reviving you from a dream and into your morning. It’s a hazy ending to an album that has really put this band out there with their best foot forward once again; Best Coast continually evolves into something a million times more beautiful than where the band originally started- they’ve nailed their alternative/pop sound to perfection on California Nights.

Find out more about Best Coast at the official page at: http://www.bestcoast.net/