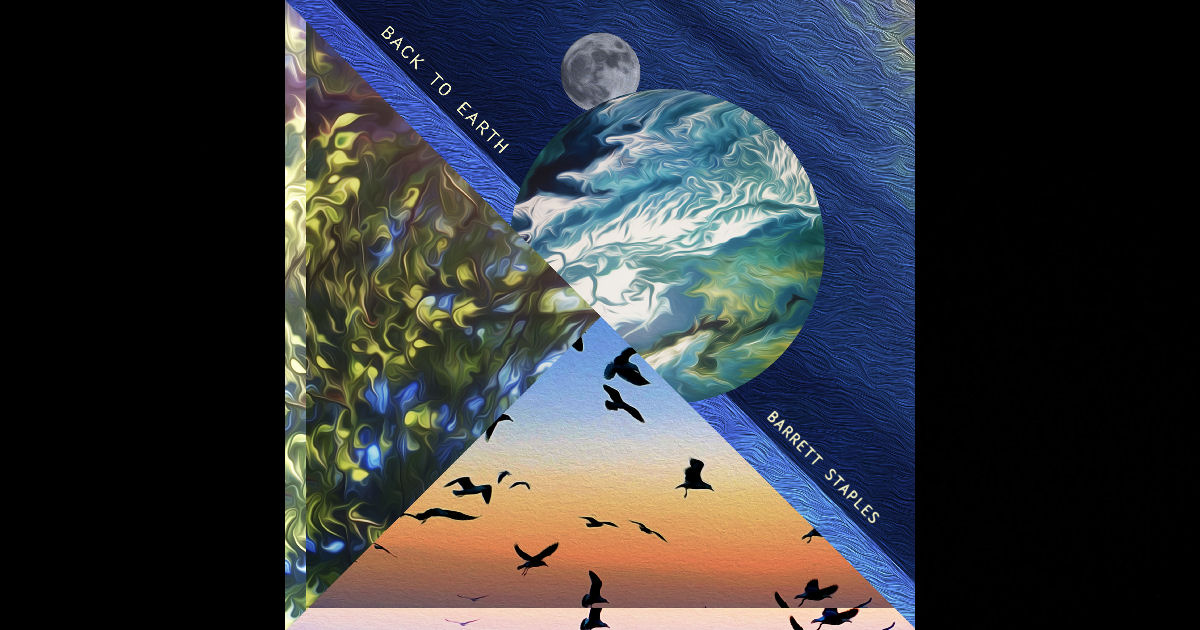 Mr. Barrett Staples – it has been a minute or two sir!

Stoked to have this artist back in the mix – it was back at the end of 2016 that we last had Staples up on our pages, back when he’d released his That Yonder EP – and to great acclaim at that.  Quality takes time as they say…who would I be to rush another artist’s creative process when no one out there on earth could have me rushing through my own?  If Barrett needs an extra year or two to drop some new tunes on us, I could have told ya long ago that it’d all be worth the wait…and that by the time you heard from him next, you’d know he’d be back with something awesome for your stereos to bump.

And here he is, right on cue, Back To Earth with an EP from 2018 that shows the man is still at the top of his game.  Flashing finesse and a brilliant set of colorful vibes that prove Staples hasn’t lost a step in his time away – Back To Earth sparkles with wildly diverse & catchy cuts designed with genuine swagger & style.

Fun fact for you as well…at some point in time, “Barrett Staples became the first rapper in history to cook chicken onstage at his show at Nectar Lounge in Seattle.”  I don’t know who out there writing the history books gets to keep tabs on all this kind of information, but what a rad job that would truly be.

Working with a smart vocal hook that immediately makes a rhythmic impact on the EP’s opening cut called “Delta” – Barrett rolls through his bars with an instantly impressive flow that is designed to stick with ya; you feel this vibe right away.  From the subtle synth sounds to the beat, “Delta” keeps it fairly minimalist when it comes to the actual ingredients in the music, allowing this first song to shine a bright spotlight on the star of the show and get us a clear sample of the skills & soul he brings to the m-i-c.  As minimalist as it may be, everything included will leave a lasting impression on ya – and a positive one at that.  From the crispness in the snap of the beat, to the clever ways the synths show up in this song, to the absolutely ESSENTIAL background vocals goin’ on throughout the mix, and of course the lead vocals provided with style for miles via Barrett Staples – “Delta” proves he’s more than ready to roll tape once again confidently.  Not a single move out of place – “Delta” moves at a sleek & sly pace musically, while Staples displays a full array of what he’s capable with his speed & melodic approach throughout the length of Back To Earth’s first cut.  Stoked to hear things this tight for the man after coming back to the studio where he belongs this year…”Delta” is boldly chill to lead-off a return to the game with, but it’s an effective one; a track that allows Back To Earth to start on solid ground before it takes off completely.

Where “Delta” does a good job of setting the atmosphere & mood – “Photosynthesis” is that track that immediately raises the stakes and makes you stop doin’ whatever you’re doin’ to take notice of what Barrett’s laying down on this second cut.  Did he REALLY just somehow work “Photosynthesis” into his lyrics with supreme smoothness to create the hook & chorus of this song?  Did that REALLY just happen?  I can confirm it did.  Admit it – you’ve either:

A)  Never heard a song use the word “Photosynthesis” in it before.

B)  Have never heard a song use the word “Photosynthesis” this well before.

And like, if you somehow fall into category B out of those two options, congratulations on listening to some seriously wild & creative music out there…I can’t remember ever hearing that in a song before.  Might seem trivial, but it speaks to Barrett’s insightful way of using words we’ll recall or how he can create hooks we won’t forget anytime soon.  That FLOW in the opening verse…is SO GOOD…and that added spark, charisma, and straight-up charm that Staples adds to the tone of his voice & his upbeat attitude on “Photosynthesis” also counts for a ton of the natural appeal you’ll hear in this cut.  Dude’s looking to create a HOT cut for the summer with “Photosynthesis” – and mission accomplished homies.  From the sweet sounds of the acoustic guitar intro on the way in, to the warm vibes of the vocals surrounding you with genuine personality and flashy rhythm – actually reminds me a bit of Travie McCoy when it comes to the sheer amount of universal appeal and character you’ll hear in Barrett’s own voice.  Dude’s got that same versatility & high-level of quality too…Staples brings his A-game to both singing and rapping.  Dude’s on-point yo!  His background vocals are massively essential in the cuts he’s creating as well; as much as it can be extremely tough to take your ears off of the sly moves he makes in the lead, it’s the attention to detail he’s putting in on cuts like “Photosynthesis,” from lead to background, that keep him setting the trends instead of following them whenever he shows up to drop a record on us all.

If you’re wondering what the REAL single of this record is though…if you’re looking for Back To Earth’s most accessible and sure to be loved song – it’s “Oceans (High Tide)” without question.  Make no mistake dear readers, dear friends – this isn’t JUST a great song on the EP, it’s absolutely undeniably one of the best you’ll find in the Staples catalog to-date – that’s the level of single-worthiness we’re talking about on “Oceans (High Tide).”  I could go on & on about the versatility and dynamic way that Barrett has as an artist, but suffice it say, this song proves everything I could possibly say to be true – he’s 100% magnetic on this third cut from his latest record.  A solid example of everything you could want coming together exactly as it should – the hooks of “Oceans (High Tide)” are beautifully smooth & melodically enticing in their lyrical sweetness.  With P-H-A-T bass-lines in the mix for ya, ocean waves rolling through, bright guitar tones, inventive percussion, and more essential backing vocals along with it all – Staples includes every ingredient your ears could possibly want to hear & more than you could imagine.  The results produce a completely good-time vibe that you won’t be able to get enough of, despite how much you might try; I’ll admit, I’ve spun this whole record several times, but I’ve likely spent a few more spins on this one cut as well – it’s basically a flawless and completely perfect tune – how’s that for ya?  Will that do for a description to head over and listen?  How’s about I make it even easier for ya to find that summer jam you’re looking for this year – check out “Oceans (High Tide)” and have a listen below!

I mean…what else can be said?   With the highly-stylistic & supreme flow he finds on the final cut “Orbital (Low Tide)” – the man is undeniably in the ZONE by the end of this record!  Mind you, he pretty much started out that way right from the drop.  “Orbital (Low Tide)” finishes the Back To Earth EP with a smoother-than-smooth five-plus minute tune that slides right into the beat and reveals the main star of the show as it heads on in towards the thirty-second mark.  Staples comes out immediately sounding as inspired & electric as we’ve known him to always be, and the music surrounding him is as subtly-dynamic as it gets.  From the slight crashing of ambient waves, to vibrant neon sounds, playful keyboard melodies, immaculate trumpets, deep bass-lines & more – “Orbital (Low Tide)” will provide your ears with well-balanced entertainment from the lefts to the rights.  What he’s created for the chorus of this cut completely stands out for its artistic composition – you’ll hear the man seriously flex his capabilities in that moment; he’s still handling his business with confidence & control throughout the verses, no doubt about that – but the chorus…or at least ONE of the choruses (you could argue there’s a few here) proves that Barrett’s got skills, instincts, ideas, and abilities others just don’t have.  You’ll know the part I’m referring to when you hear it, it’s that distinct – you’ll hear Staples pivot, shift, transition, and chop his flow up in extraordinary ways that completely catch the ears.  And in the midst of what’s a mostly chill cut when it comes to the atmosphere & vibe of “Orbital (Low Tide),” moves like that where Barrett flips the script on us end up making an even bigger impact.  Lots to be enjoyed about this final offering from the Back To Earth EP when it comes right down to it…he’s got a fully hybrid cut goin’ on here with a ton of crossover potential, sings it with soul, raps it out with precision…the whole fluidity of the movement on the mic and the way he works the melody & style into this tune is outstanding.  Definitely a solid ending to a record that’s shown no cracks in the armor of this bulletproof artist – Barrett Staples brings it to Back To Earth and proves he’s as on-point, relevant, and supremely catchy as ever. 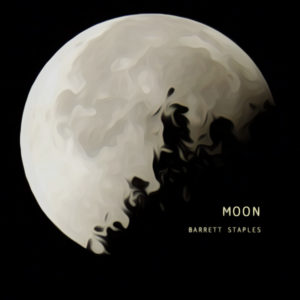 The bonus single we’ve got here in review looks like it precedes the new EP by just a lil’ bit, serving as a sample of what was to come as he made his way back to the mic in 2018 when all this music came out originally.  “Moon” makes its biggest impact through the verses without question – that’s where you’ll hear the real magic of this artist spring to life big-time on this cut.  Chorus-wise, it’s a bit on the looser-side perhaps…still assembled & performed to the high-standards we’re accustomed to from Staples, but writing-wise, it’s more reliant on his swagger & personality to pull you in through its rhythmic roll more-so than highlighting his lyrical ability this time around.  Don’t get me wrong, he’s not gonna let you down in the chorus department when it comes right down to it – Barrett’s still as entertaining as ever and puts in another inspired performance throughout this whole song – I’m simply saying he’s out-written himself when it comes to the difference between the allure of the verses/bars to the pull of the chorus, that’s all.  I’m gonna chop that up to uniqueness really – the main hooks of “Moon” will certainly give you something rad to listen to, but it’s the jazzy & supremely stylistic approach that Barrett takes to the verses that become the most memorable aspect of “Moon,” in my opinion.  And like, hey, when you spend all that time writing all these words – that’s not a bad thing at all really is it?  Every song has its own gateway into it; no matter what artist or band creates it, as long as we can find it as a listener, that’s always a success as far as I’m concerned – and I’d imagine you feel the exact same way.  Barrett Staples gives you constant & consistent reasons to keep listening.