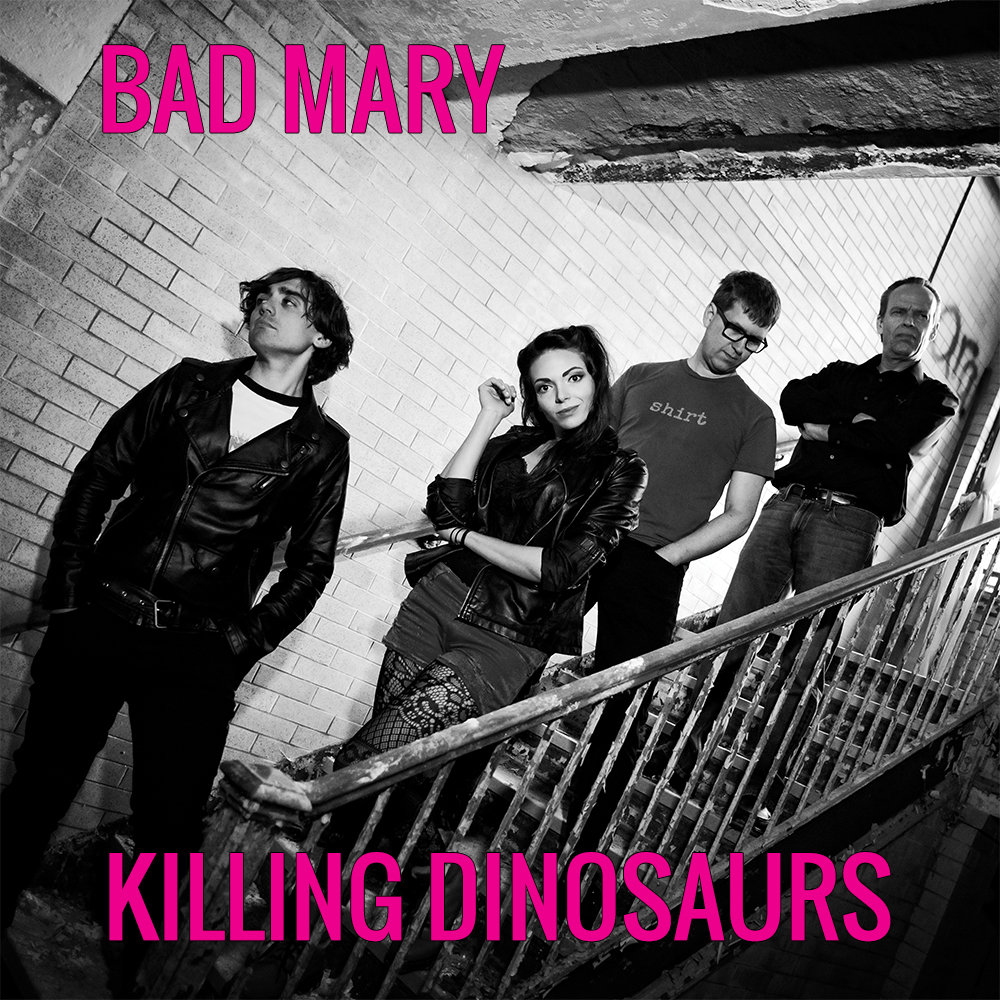 Credit to this band…when I started up the Killing Dinosaurs EP by Bad Mary my first thoughts of comparison drifted right to the stylistic New York punk-scene…and as it turns out, that’s exactly where this four-piece band is plugging-in on the regular and base their music from. So there’s that to start, which is in the plus column…Bad Mary sound authentic to the scene they’re ACTUALLY from…which, when you think about it…applies to only a few bands from a few places where definable sounds & scenes took place. To be able to identify and hear that influence as soon as “Soapbox” started to wind-up the Killing Dinosaurs EP…and so quickly…again, that’s commendable.

It’s always tough to remain completely objective when a genre of music that comes your way isn’t within the scope of our comfort-zone; and this is that for me entirely – punk-music isn’t where I’m at for the most part. Like all music, there are a few that breakthrough for me…but in truth, they were from the New York scene or even during that time. Not that Bad Mary sounds so entirely dated that it’s like you have to deck yourself in leather just to listen…you could call it a mix between the serious grind & glam of the city’s historical scene combined with the playful vibe you’d find in modern-day acts like Green Day or even The Ting Tings.

That being said…grating is as grating does…and some of this is. Mike Staub’s backup vocals in “Soapbox” and particularly Amanda Mac’s performance on “Want What I Want” are either going to make or break much of these songs for you and whether or not you’ll connect to them at the start of this EP, which is a little shaky to be honest. You could listen to the free-wheeling, reckless aspect to the punk-inspired performances…or, in many cases, it’s going to be tough-listening to tones designed to retire the classroom-chalk; punk ain’t always easy on the ears…it’s (the genre) never made an effort to be.

Musically, I can appreciate the ripping bass, drums, guitar combo and the tightness of the band. Even HOW the vocals flow through the songs…it’s good in every cut…it just ranges in terms of control of the tone throughout the Killing Dinosaurs EP. For example…both “Hanging Around” and “Next To You” that make up the middle of this EP are much more accessible to all in comparison to the grind of the first two songs that open the record. Even though the amped-up “Hanging Around” with its ‘hey hey hey’ chants is not something for me…there’s a wicked-level of control that starts to creep onto the record right around this point…like the first two literally were a warm-up. “Hanging Around” is a spot-on performance and they’re set to kick some ass in the middle of this record. “Next To You,” if you were to ask me…represents the best of what Bad Mary can do…it still has the madness/mayhem aspect to it, but carries with it a much more pronounced melody that completely plays to the strengths of Amanda’s voice and the resulting fit sounds much more controlled in its chaotic nature, in a good way.

Punchline-music has never been a thing that’s ever been huge for me…and “Sucks To Be You” fits squarely into that offbeat category full of music that eventually pulls a dead-stop to accent a vocal-line, lyric or hook. It’s not music’s fault that many of these particular styles of song were associated with way-too-lively used-car salesmen of the late 1980’s and their television commercials…but alas, here we are music…this is what you’ve done to me…that’s what I associate with ‘punchline-music.’ What “Sucks To Be You” does manage to do, is still play to the strengths of the band in the sense that the performance is well-recorded and right on the money…this one’s just the furthest away from my particular sounds & style of choice, that’s all. Differences make the world go round & all that… The grinding, distorted guitars are wicked and the backing harmonies are actually my favorite on this EP on “Sucks To Be You” – so just like I’ve mentioned several times here at SBS…might not always like something, but there’s always something to like in everything. And I do appreciate the amount of fun and energy the punk music of Bad Mary seems to pack in…it definitely commands the attention-span.

Again, slightly incorporating a little more melody into the power-pop-punk cut, “One More Song” – this one comes out ending the EP with probably its most modern-day sound. Much more close to the bounce and snap of the melodic-punk rhythms & grooves in a band like Green Day – Bad Mary at least outdoes them by one and shakes it up for just a moment to include a short guitar-solo within the under-three minute song. Take THAT Billie Joe Armstrong…when was the last time you did that in the SHORT songs? Don’t even try to talk to me about American Idiot…I love the album, but calling it punk would be cheating severely…it’s not fair to think they’ve accomplished something by adding in a solo here & there into a NINE or TEN minute song…I mean…c’mon…that ain’t PUNK!

All jokes aside…Bad Mary does a great job of ending the Killing Dinosaurs EP on what I think might have been their strongest tune. I dunno…I could make a massive argument for “Next To You” as well…I think between that and “One More Song” there’s enough to convince me that Bad Mary’s got a place on stereos out there other than just us music-journalisty-types. It might range in control somewhat, but I think the performances get stronger as the EP plays through, and that it also displays a range of ideas within their own signature-style that progress from the beginning towards the end as well. It’s been a good time out here listening to Bad Mary…I can’t complain. Their brand of punk music is definitely energetic and engaging and the Killing Dinosaurs EP never really lets off the throttle for a single second as it rips by.

Find out more about Bad Mary through their official page at: http://badmary.com/