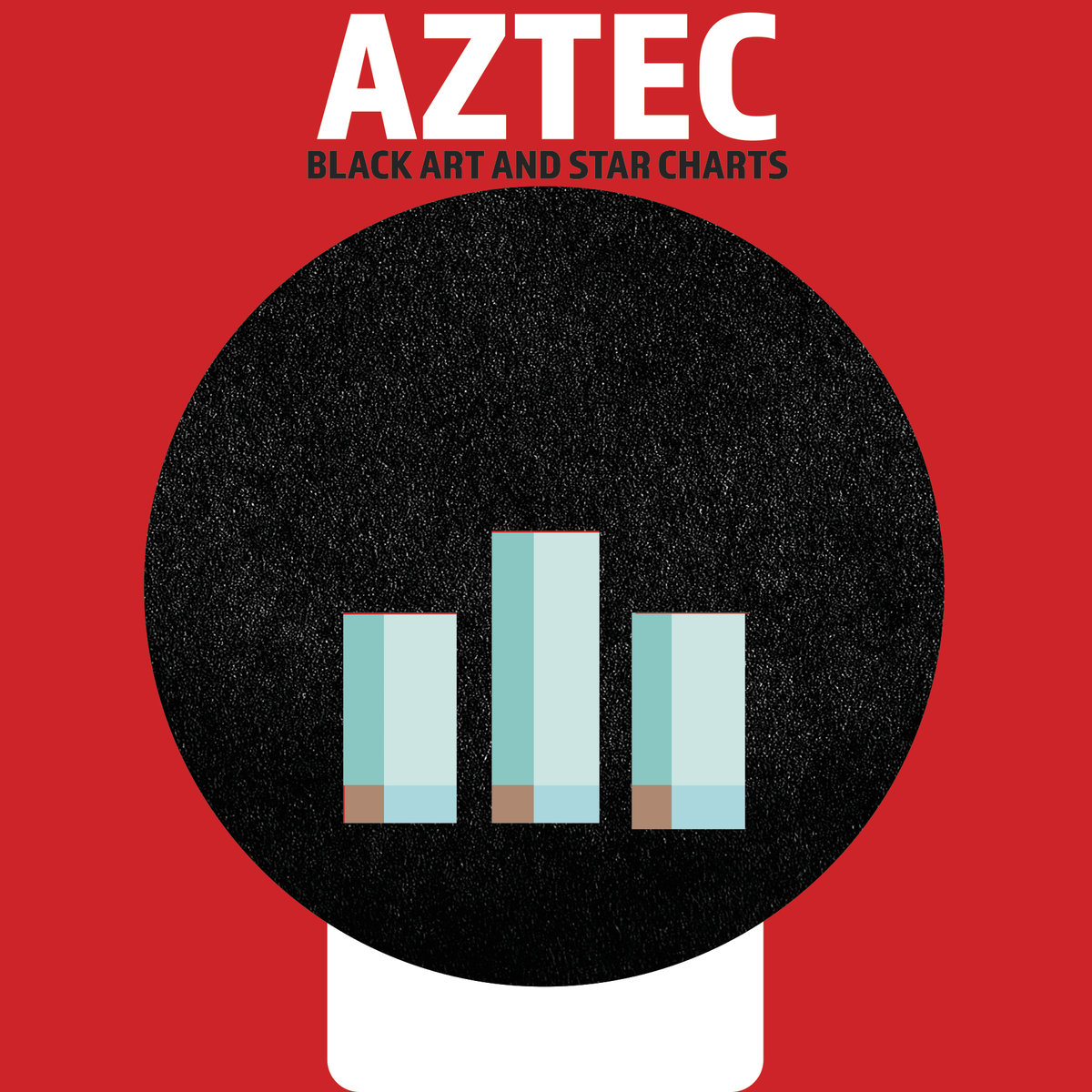 You’ve already heard my comments about looking forward to this EP from just about every corner we’ve been in on the internet from our SBS Podcast to our show SBS Live This Week…once word got out that Vancouver Island’s indie-band AZTEC was getting close to finishing up the follow-up record to their debut Stitches EP I’ve been stoked to hear what this crew would come up with next.  The first record was a completely solid entity filled with the life of a band that came out gunning to make their mark; it’s inarguable to say you can’t hear the growing maturity of AZTEC throughout the scope and span of these new tunes on Black Art And Star Charts.

With a bit of a lineup switch, AZTEC has seen themselves through the departure of former drummer Amber Banman and brought Chris Jordan in as a permanent fixture.  I’ve had the privilege of being able to talk with Chris on a few occasions…I knew exactly how fired up & ready he was to make his mark in this band.  As a person he’s one of the funniest and most naturally gifted & versatile musicians I’ve witnessed up close…but despite the humor he brings to the band outside of the music, inside what happens on Black Art And Star Charts and the resulting more ‘mature’ or ‘serious’ or ‘focused’ sound – whatever you want to call it…well…I’d assume a lot of that is also the result of having Jordan taking on a strong role in the writing and direction of these tunes.  Makes complete sense to me that he quickly clicked into place with bass-player Patrick Gleeson who’s equally extraordinary, diverse, gifted & versatile as a musician.  Soon after the record completed recording, lead guitarist Saul Sitar also left the band to pursue new opportunities with the band Hawking…all things amicable in these shake-ups to the lineup as far as I’ve heard…but no doubt as you’d expect, you’ll hear a different side of AZTEC as they shift gears throughout a transformative time on this new EP.

The transition begins smoothly with the energetic & wild-hooks of “Southern Brother” feeding off from a Stitches-esque energy and into a newer dimension of their own depth of sound.  Once again produced by All Get Out’s Nathan Hussey – this new record has more beef in the low-end punch which adds to the rhythm and impact of the bass from Patrick Gleeson and quite often features a reverb-laden set of distant, melodic vocals from lead-singer Kyle Schepens being backed-up fantastically with great harmonies.  “Southern Brother” introduces you to their more focused sound but still has a massive amount of pull, hook and brightness to the explosive chorus.  Great mix on this tune that captures the essence of Schepens unsure & frantic sound in the verse…that blissful hallmark of a great indie sound…and then also finds a way to make him smooth right out as he heads into the chorus; once in the chorus, he’s nestled right in the pocket with surrounding vocals to bring out the melody in this mother in-full.  Great start to Black Art And Star Charts and the initial hit of the return of AZTEC immediately begins to fully live up to the high hopes & expectations I had for this record.  “Southern Brother” has a hook so damn strong in the chorus that you’re bound to sing this tune for months on end around the house – and yes, I can personally vouch for that.

Heading into their lead-single, a song we’ve featured in advance of this review on the SBS Podcast – “Wind Tunnel” dives right into the deep-end of the more developed AZTEC sound.  Guitars from Saul Sitar are absolutely incredible on this tune and deserve a serious shout-out…Hawking has made a great pick-up there for sure in gaining him as a guitarist but true shout-out to AZTEC as well for recognizing he was looking for a different sound to play overall and parting-ways so professionally.  They’re all still completely supportive of each other from what you can see online in their social-media…and that’s the way it SHOULD be in situations like this.  Anyhow…I’m off-track here…Schepens & Sitar’s guitars fuckin’ rock throughout “Wind Tunnel” and are a large part of what really pulls you into this song.  Solid job from their newest member Chris on the drums with the crisp & tight beat he’s put into this tune…great stop/start energy fuels the drum-line and gives him plenty of pauses to snap back with pure energy.  This band consistently shows a real songwriter’s craft…and even though “Wind Tunnel” is the record’s shortest tune, AZTEC takes you through quite a hauntingly melodic journey on this cut through its smart pacing and insanely clever hooks that Schepens has built into the rhythm of the lyrics.  I’ll say this…much like I felt about their Stitches EP – ANY of these tunes has single-potential…over the course of what you’ll listen to on the five-songs on Black Art And Star Charts you’ll hear that consistency in the quality of the writing for certain.  I dig the full-on anthem-style of the chorus in this tune…but if I’m being truthful, I think the real magic of “Wind Tunnel” is in the verse completely.  They’ve done all the right things in the chorus – don’t get me wrong…it’s punched-up and sounds fantastic and HUGE…but the more isolated and haunting sounds in the melody-line, vocal-flow and music-pairing with Schepens in the verse was a real highlight on this new record for me to listen to and one of his strongest verses to-date.

What is really impressive to me is just how quickly we’ve got audible evidence of Jordan fitting into this band exceptionally well – but specifically in the rhythm section with Gleeson; these two work like the tightest of clockwork as they grind out an older tune from their catalog with a completely updated sound.  “Feet Like Roots” is a song concert-goers and longtime fans of Aztec might remember from live shows throughout the years…but here in its first recorded version…like…WOW.  Proving that there’s always still room to improve on a great idea – the bar is raised with the inspired sound on “Feet Like Roots.”  Instantly on the attack with a full-on instrumental opening that comes out blasting, they drop right into the groove and lock into the verse…and from there “Feet Like Roots” just builds and builds and builds in extraordinary ways.  Real credit to Schepens once again…I think he’s got some back-up or potentially an added layer to that leads to the success that AZTEC finds in the bombastic & emotionally-complex chorus they’ve created but facts are facts – that’s an incredible part he’s written and it’s pulled off to perfection.  Again flexing that alt-indie sound like a more aggressive tune from a band like Band Of Horses – AZTEC absolutely storms through this song with fragile confidence that never seems to break.  Really impressed by how massive this entire idea became…again, being familiar with where this song started, I can tell you firsthand that this whole song is enormous compared to where it first began.  There’s one set of backing vocals in a short verse around the two-minute mark that I thought maybe came out a little low in the mix…but that’s a minor observation at best – I’m certainly not complaining.  “Feet Like Roots” fuels an explosive and powerful middle of AZTEC’s EP with genuine passion & sincerity.

While I was more tossed-up on “Your Plans” I still had a harder time pinning down what it was that made the experience more of a mixed one for me.  As far as my memory serves…this might have originally stemmed from another song I’ve witnessed live…it’s hard to say.  I can tell you I don’t think that the AZTEC that’s on the Stitches EP could have yet written this tune or pulled this off in its earlier incarnations…and in many ways I think the atmosphere you do hear in “Your Plans” might very well hint at another avenue that AZTEC might explore more throughout the future.  There’s still all the undeniable hooks you hear in the music…I think if anything I just kept expecting “Your Plans” to find itself a part-two after it’s short duration…it sounds like it’s about to break into something even more fantastic after the gigantic chanting chorus.  You could argue that the spot from the second-minute & forward kind of gives you that – but with the song ending at 2:24 you don’t get a whole lot of it…and I’m greedy, as I’ve mentioned many times – I always want more.  To me what they’ve got here in “Your Plans” hints at that even bigger second wave coming to hit you after the chorus…I dig the tune and love the backing vocals you hear throughout this track…I’d honestly recommend continuing to look into expanding this tune somehow into a seven-minute epic somehow because I think the beginnings here are seriously strong.

Saving their most unified & powerful tune for the end…these sly-foxes unleash their title tune “Black Art And Star Charts” at the end of the EP.  Absolutely KILLER grind in this tune…awesome guitars, explosive rhythm section and truly dynamically written parts – “Black Art And Star Charts” ends the new AZTEC record on the highest of notes.  Everything about this tune just sounds RIGHT – know what I mean?  From the quick click of a hi-hat into the familiar churn of the AZTEC style, this time accented with additional synth in there it sounds like…they’ve put together that perfect mix of low-key in the verse and absolute power in the chorus.  Personally I think this is a real evolution in the sound of the vocals in AZTEC – you can hear this band reaching for some tremendous parts in the writing and fully conquering complex notes and transitions in the tone & sound as “Black Art And Star Charts.”  Great mix in the layering of the backing and lead vocals on this final cut…the separation is freakin’ marvelous to listen to and seriously effective in bringing this last tune home.  Awesome rhythm & groove…this track has just as much swag & style as it does raw power and really ended AZTEC’s new EP with that final knockout punch you’ll wakeup remembering.

Find out more about AZTEC at their official page at:  http://www.aztectheband.com/