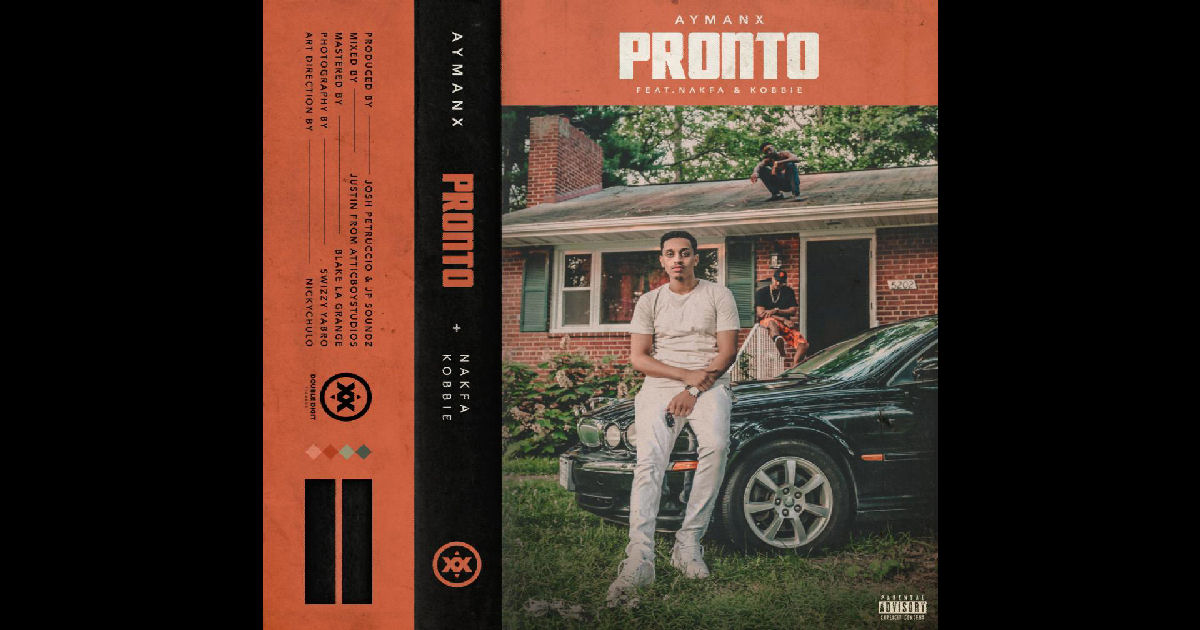 It’s funny…no sooner did I get into the hooks of “Pronto” and noticed the background layer echoing ‘moneyyyyyyyyy’ in a way that got me grinnin’ – I look down at the comments laid down by the people at Soundcloud where this is posted up and there’s a post that said exactly that in all-caps.  That might actually seem like a small detail to some…but to those that listen to music all day long like I do, it’s just a given that when you find multiple people responding to something specific like that in a song, you’ve genuinely got something there.  The hooks on “Pronto” are seriously smooth right from the drop as this second single from AymanX makes another solid impression and memorable impact, featuring stellar performances from Nakfa & Kobbie contributing to the mic and ‘mixing like they’re mastering’ from beginning to end.

If you just read the previous review released today that covers the AymanX single “Foreign,” then you already know I was excited about what came through the ol’ speakers.  I can’t honestly say I’m any less excited about “Pronto” – I think this track has just as much going for it at the very least, and also offers a further glimpse into the dimensions of sound that AymanX is set & ready to take over 2018 with.  There are multiple ways that can be argued that “Pronto” is more widely accessible with its R&B approach to the main hooks…which are…seriously bulletproof.  After a quick intro, the rhythmic groove of the chorus sets in and immediately delivers satisfaction, opening the doors and laying out the red carpet for the main star to strut on into the verse with confidence for the first set of bars.  The flow, pace, metering and flow is spot-on once again…and that applies to everyone involved; not only is AymanX a skilled and capable emcee himself, but he’s clearly also only a call or text away from some seriously talented backup.  Nakfa & Kobbie both provide their own doses of character & charisma on the mic, each with a defined & identifiable sound that bring a different texture to the cut while still fitting right in with the surrounding atmosphere…this crew trading-off the mic between each other sounds entirely natural, like they could all be blindfolded and the next emcee would still be ready to reach out and grab it at the perfect time.  The transitions between parts is flawless, each flow is divided by hittin’-up the main chorus hooks, ensuring that this track takes you for a trip so smooth it hangs in the atmosphere like Glade made it fresh.  Equal caliber strengths are representing from the mic at all times…if it comes down to one thing more than anything else in a collaboration that works, it’s finding that balance like this crew of talent enlisted to assist has on “Pronto” & how well it all suits the main idea on this cut from AymanX.

AymanX is definitely onto something…putting out “Pronto” and adding Nakfa & Kobbie was a really good call this early on into releasing his material online…it opens the doors for what we can hope to find coming out in the future…because the collaboration here is all the audible-proof your ears should need to know that this is an avenue that’s also worth exploring in his music if it’s gonna come out like this.  I think that degree or two that “Pronto” moves towards a more accessible & mainstream vibe also gives this track a genuine shot at reaching a wider audience as he establishes himself out there on the scene in 2018.  After what I’ve heard in his single “Foreign” and on this collaborative effort with his homies Nakfa & Kobbie on “Pronto” assisting in making this second cut just as strong in its own separate way – this guy has already given us a couple reasons to look forward to next year and what’s to come.  Word on the street is that AymanX is set to come out of with a ton of music throughout the next year; I can’t say I blame the man whatsoever…if I was on a roll this strong, I’d never want it to stop either.

Find out more about AymanX through his official page at Facebook here:  https://www.facebook.com/AymanXBeats/