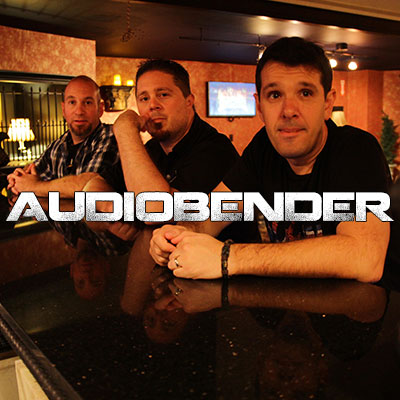 Alright…let’s see if Audiobender can keep this day headed in the right musical direction! Definitely feeling good about the potential here for another great album coming to us this morning as the new album Reverb starts out rocking hard & fast with “Alright With Me.” The good-times and good-music seem to be flowing out of my speakers just fine as Audiobender gets the energy going, off and ripping at full-speed right away. I ask you – what better situation could we ask for when celebrating our 300th review in print!

This guitar-driven three-piece has put their music in a well-timed, flawless assembly that works for them over and over as you go through the album. “On And On” is a great pop-rock tune; lead-singer Jared Richard has put together a great melody through both his vocals and his guitar on this song. The result is a tune that could bring in listeners from all genres as it flashes crossover appeal. Am I crazy though – or somewhere in there does Richard switch minds, bodies & tones with The Cult’s Ian Astbury? I like the way that this guy lets himself loose on these songs…real vocal-improv spots that have merit and aren’t simply filling the space; he uses his voice as the fourth instrument in the band just like a great three-piece should be.

With “Sweet,” you get another inviting sound, this time led by the bass of Paul Cingolani and the drums of “Jeff Lemas.” It’s a melodic tune that keeps the energy up in a subdued way. I like the fact that the energy and enthusiasm…the pure LOVE for making music…it’s a prevalent force in their music. As much as I might like the sound itself, it’s the performances themselves that are making this album a winner for me; Audiobender clearly loves what they do and you can absolutely hear it on tracks like “Sweet.”

An excellent switch in direction and vocal-tone lifts “MFH” right up and over these first three tunes with a seriously addicting hook and sound in this song. Led by an intense guitar riff and their own excellent instincts – this song rocks from the beginning to end. Excellent guitar solo in this song as the band keeps the beat and intensity on full in behind. Overall, this is the song that will certainly make you a believer in Audiobender and goes a long way to prove they’re much more than just a one-note band.

Gently into “One In The Hand,” you again get to experience the versatility of these three musicians based out of San Jose, CA. Almost a blues-pop-rock combo here, this song is every bit as addictive in tone and assembly. Showing the sensitive-sides of themselves and putting the emotion on display, this song works extremely well for them. So far so good boys – this album hasn’t let me down in the slightest – you’ve more than proven worthy of our 300th honor, privilege and experience with reviewing independent music. Another absolutely fantastic guitar-solo in this song with tremendous tone is every bit the proof of that on “One In The Hand.”

Refusing to be pinned down to any certain style or sound, they push out of their boundaries or any genre-restrictions once again as they jump into the pop-rock track “The Rules.” Short and sweet as they come, this power-pop tune rips through quickly at just over two minutes, resulting in a tiny piece of rock-confection that you’ll be dying to repeat the moment it ends…but hang on…there’s still more tunes to come at the end of Reverb that warrant the attention from your earholes just as much…

Finding his inner-Astbury once again on “I Won’t Write This Song,” Jared Richard lets the vocals ring out strongly once again on this heartfelt & emotional lyrical display. It’s one of the more ‘traditional’ sounds of real song-writing that you’ll hear on this album and really kind of helps the following tune “Know What I Mean,” standout instantly for the innovative verse it possesses. With a light-funk in their step, this is yet another arrow in the musical-quiver of Audiobender who have certainly shown a range of sounds and styles here on Reverb thus far.

With one of my favourite sounds coming in towards the end of this album, “Say Goodnight” is an interesting track from its opening moments. It’s extremely stripped-down and bare comparatively to the rest of the music until it finally kicks in; it sounds isolated, lonely…melancholy. Decidedly too sad for the mood we’ve caught them in throughout the previous eight songs – I feel like they need a hug after absorbing this tune! Really great ideas here on display and excellent execution once again; Richard can’t help himself even in a slow song – this guy could explode microphones with some of the incredible notes he hits. I’m not sure if it’s just the way I’m hearing it, but it also seems to me that when you get the best of his vocals in a performance, there’s almost assuredly an amazing guitar-solo to follow it like the exclamation point does at the end of a perfect sentence.

As I was researching and learning about Audiobender I was also informed that this band is currently “kicking major amounts of ass whilst take a very large number of names.” Well! Let me just say – you had a literary-nerd like me at ‘whilst;’ but if there was any doubt at all – the final cut “Let It Bleed” will definitely make you a believer in that statement. There’s a ton of skill here in this band and for a three-piece they’re absolutely lighting up this album with all the audio-bending dynamics your ears could possibly want to hear. This amped up ending is the perfect punched-up performance to end off this album in the most memorable way they could.

I’d like to personally thank Audiobender for not letting me down even ONCE throughout my experience listening to Reverb. I’m proud to present such a vibrant and lively sound out here on our pages as our 300th review – I think these guys have a really great sound in pop-rock and I’m stoked to see how far these three might be able to push right into the mainstream and into your own speakers. With a universal appeal and an audibly-apparent fantastic attitude that radiates enthusiasm and love for their craft – I’d imagine we’ll be hearing Audiobender creating all kinds of intense rhythms & grooves in the future to come.

Find out more from their official page: http://www.audiobenderband.com/