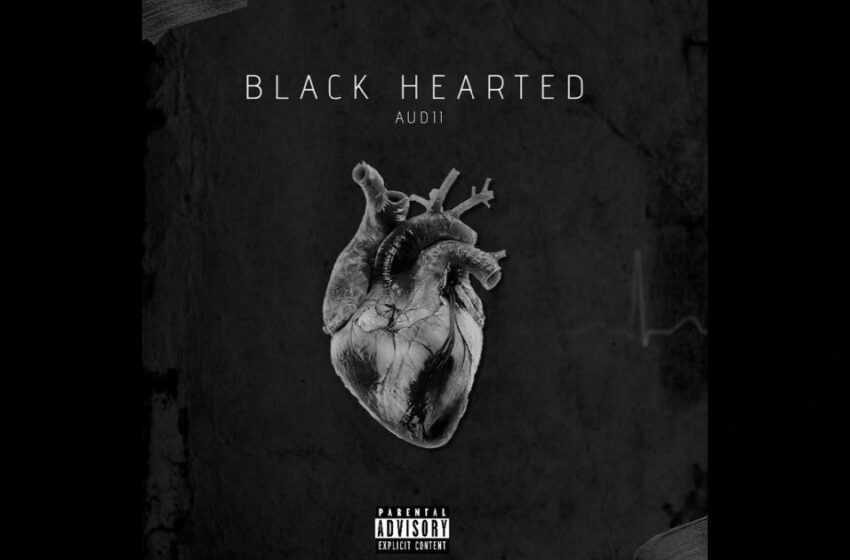 Someone get this man another minute will ya?

It’s tough to make a lasting impression with ninety seconds, that’s just the nature of the human memory – I ain’t sayin’ it’s impossible, just always highly unlikely in nearly about every scenario I can think of.  If you’re listening to Audii’s latest EP called Black Hearted, you’ll get a minute thirty-seven…if you’re checking out the video, you’ll get a minute thirty-three.  Yes, technically both of those qualify as longer than ninety seconds in length but certainly not by much…and as to whether or not that’s stacked the odds against him as I’ve mentioned up top, I’d suspect that it does – but of course, that’s more up to you than me.  Personally I think we need a lil’ more if we’re all gonna remember the man’s name next week.

Really, that’s the main factor that’s workin’ against Audii…other than that, I don’t think there’s too much in his way.  The man’s got plenty of confidence on the mic, dude raps with precision & skill…there might be some room for the hooks to make more of an impression, but in that same regard, you have to acknowledge the fact that cuts of this length tend to get in, get out, and do what they do without really having to change lanes into a major chorus switch, or even take it up a notch into that second gear.  Ain’t nothing wrong with the recipe…and of course creative freedom & artistic license all come into play as well – no one out there says we gotta rap forever or for even three-minutes, but the shorter a space that any artist or band out there has to make that lasting impression on ya, it becomes exponentially harder.  As far as singles go…it’s tough to say – I think I’m still pretty much of the mind that you gotta be lookin’ at about at least three minutes for the people to really remember anyone out there…I think you need about that much time as well to withstand the wear & tear of repeat…but honestly, I’m not really hating on what I’m hearing either, or seeing in the new video.  Don’t get it twisted, Audii has a lot of the juice you’re looking for when it comes to personality & charisma & capabilities & all that…I really think he just needs a bit more runway to land this plane on the solid ground it needs I suppose.  When I listen to “Neva Leave” my first thoughts are generally, ‘good job homie’ – there’s no doubt that Audii holds it down tight for the time that he has, but it’s much tougher to gauge whether he’s done enough here to genuinely get people super excited about a track they’ll click, and by the time they take their hand off the mouse, or the buttons on their screens, I mean heck – this single is nearly over already by that point!

To his credit, I probably wouldn’t write a single word about song-lengths at all if I didn’t believe he had more in the tank to give us, or the ability to rock the mic for longer – ultimately, Audii gives you a taste & a glimpse of what he can do with “Neva Leave” and the effect on us is that we’d all likely want MORE; but sure, people cut short songs sometimes…again, nothing wrong with that.  Still lots of positives to take away here, mainly in the man himself and the confidence he carries with him to the microphone – Audii’s got a solid melodic flow that moves fluidly & speaks strongly on behalf of what he can bring to the game when it comes to the durability of his bars.  Visually, I think he’s given himself another advantage with the video that comes along with “Neva Leave” – yeah it’s short like the rest of course, but you get to see Audii in action the whole time, and it honestly makes a huge difference in connecting to a track that’s just over the ninety-second mark.  That all checks out with me…if you’re gonna do something, do it right – and on that level, like I said, Audii holds his own, and even in a short scenario like we’ve got here, he makes sure to put as much as possible into the material with the time he’s got.

Reliable & rock-steady rhythm, great energy & quality content in his lyricism…all of these elements are the fundamental blocks he can build on as he pushes forward into his career from here on in.  He’s got a gift when it comes to his sincerity, his ability to craft thought-provoking lyrics & deliver professionally, and the evocative payload of the final moments of “Neva Leave” reveals a highly expressive artist at work.  I can see tracks online that trace back to 2015 as far as finding Audii appearing as a guest-star on tracks out there, but as far as his own solo career, it looks like this is where things are getting started with the release of his debut EP Black Hearted this year.  Plenty of time to make an impact over the years to follow – “Neva Leave” is a solid introduction & a glimpse of what he can do, and much to his credit, it’s the way he uses what time he has, that gets us interested in listening to what else he’s capable of.

Check out more from Audii at his official page at Spotify here:  https://open.spotify.com/artist/28uiFrTkk7Ik9xvszOG27K