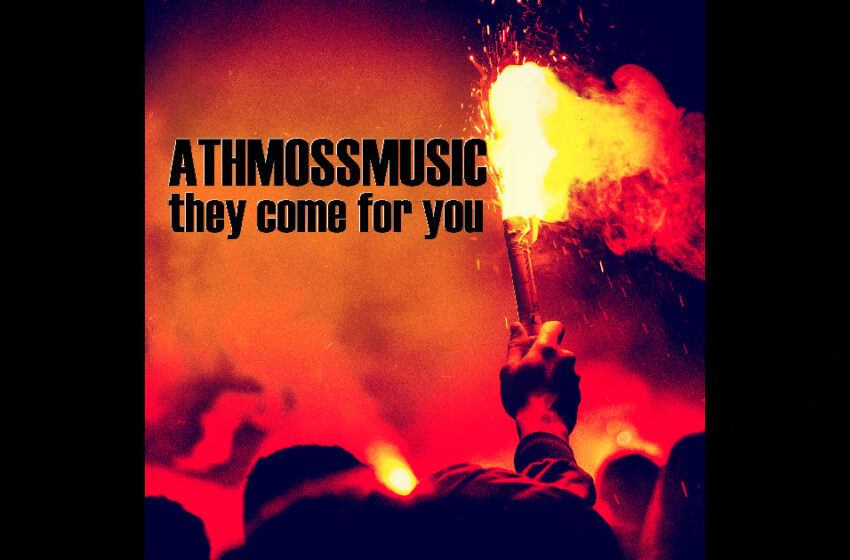 Athmossmusic – “They Come For You” – Single Review

The real question you need to answer for yourself in listening to this new Athmossmusic single, is who are ‘they’ and who ‘you’ might actually be…because you might be surprised about who’s exactly coming for whom here…

Don’t get me wrong…I’m simply musing out loud…I understand what’s being said here on “They Come For You” and what’s being communicated…or at least, I think I do.  Traditionally in writing & speech, ‘they’ often refers to the man, the big cheese, the head honcho, big brother – and/or the government; aka ‘the elites’ you find referred to so often now within our current political climate.  I’d say it’s safe to say that’s the intended ‘they’ that Athmossmusic is referring to – which of course, makes us, the ‘you’ part of this whole equation.  Or at least, again, that’d be the natural assumption we’d all likely make.

All that being said…I feel like Athmossmusic has put a brilliant spin on this particular title, and through the rest of the lyricism within the song, you’ll likely feel that the spirit of this single reflects the complete & utter opposite.  There was a time not too long ago where so many people lived in fear that “They Come For You” – and now we’ve reached a full-on tipping point where the reverse is more truthful – there are so many of us on this planet that outnumber the few people in power, that we no longer need be afraid.  So like I said from the get-go here – who is actually ‘they’ and who is ‘you?’  If you were to ask me, based on what I see out there in the current political divide and growing civil unrest spiking around the globe – it’s the people in power that should be fearful, because it’s all of US that are now coming for THEM.  Of course, I could always be wrong about these theories…that’s all they are, just my thoughts on what I’m hearing…but through the sheer force of the music itself, and the tone of the attitude within the lyrics – to me, we’ve got a song that’s written on behalf of the good ol’ proletariat, from the people’s perspective, shoulder to shoulder, right there in the streets, demanding justice that is long overdue.  Of course, there could be other interpretations…there could be a few other theories out there that might apply…but what I’m hearing is the spirit of the people rising up to their oppressors, and taking control.  History has shown us time & time again that this is a moment that is virtually guaranteed to happen, and it’s currently sitting right around the corner, just waiting for the green light to overthrow the system.  We’re in tense times right now…let’s face it…the battle between the darkness & light has never been so vividly clear – and Athmossmusic has put together a serious barn-burner with “They Come For You” that boldly reflects what so many people around the globe know to be the truth – that the balance of power desperately needs to be restored – if it takes anarchy & a complete revolution to achieve it all, so be it.

Anyhow.  Like I said…maybe my theories are correct here, maybe they’ve got something else goin’ on entirely…I’ll leave that all up for you to judge for yourselves.  What I can tell ya, is that in-line with the most recent tunes I’ve heard out of Athmossmusic over the past several years, this crew continues to be dialed right into their sound & style, which is quite riotously ambitious when it comes right down to it.  You could look at something like “They Come For You” to be somewhat of a Goth-Opera of sorts…I mean, there’s plenty of Rock & Metal in there as well, but the Gothic tinge is definitely as prevalent as ever in this project’s latest single as well.  There are plenty of theatrics & dramatic elements along the way that’ll keep you engaged on a nearly cinematic level in your mind as you listen to the words and discern the imagery…the vocals an on-point, the music is as well – and both these main aspects have extremely heavy demands being laid on them, which they seem to have no problem meeting or exceeding through the performance.  Vocally, Athmossmusic has to shift through several gears and use different energy from part to part…and this ends up coming out really strong throughout “They Come For You” – savagely fierce moments from singer Imre when he wants to ramp up the intensity, and he finds uniquely artistic melodies to fuel the most low-key dramatic moments of this single as well.  The guitars from Antal are as scorching hot as ever, and drummer Sandor keeps the pace moving with precision like clockwork.  All in all, for the multiple twists & turns of this ambitious tune’s design, they’ve certainly given themselves a ton to keep up to – and with the resounding confidence you hear in the way they play “They Come For You,” it’s radiantly apparent just how ready & rehearsed for this moment they truly were.  They’ve had several years to think this one through as the world began to devolve around us all…and it’s songs like this that present such a resilient & unbreakable spirit that prove the real heartbeat of the people is beating stronger than ever.  Athmossmusic is on a mission and a genuine quest for justice with this brand-new single – they’re gonna take what’s theirs & do what they can to help balance the scales of inequity, even if they gotta march in the streets straight to your door to get some.  Make sure you’re on the right side of history when they get there.

Find out more about Athmossmusic from the official homepage at:  https://www.athmossmusic.com

Tags: Athmossmusic Singles sleepingbagstudios They Come For You