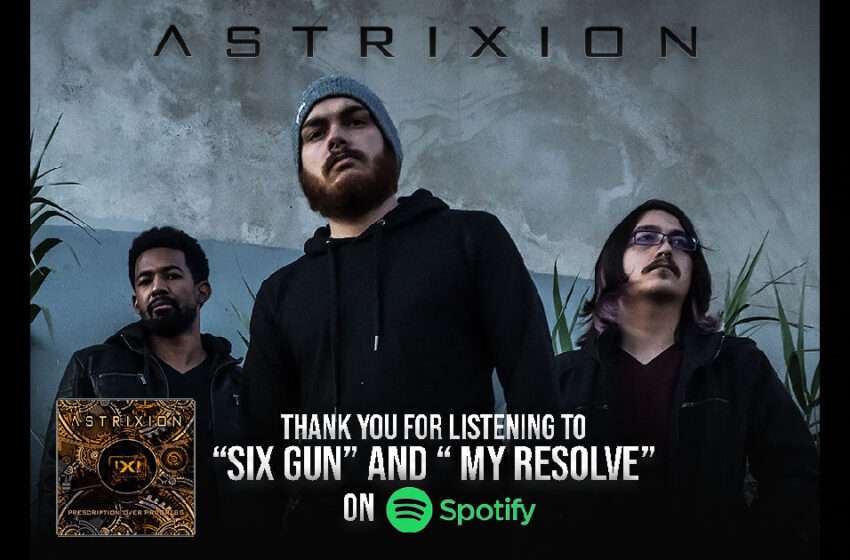 Astrixion has been kickin’ out behemoth jams ever since 2011 according to the legend online…a three-piece based out of Killeen, Texas.  We got details in the bio pointing to their first EP Breaking The Silence being released back as early as 2015…though notably it appears at Spotify two years later…we can see a single released back in 2018 called “Six Gun” as well…which is notably one of the re-releases they’ve got here in review today.  The other track I’ve got loaded up on my playlist, “My Resolve,” also has details that reveal it traces back even further to 2016, but I couldn’t track down the original if it’s still out there somewhere.  Anyhow.  You get the point…Astrixion hasn’t exactly been stuck in the mud, but it’s kinda clear they’ve been spinnin’ the ol’ tires just a lil’ as they’ve been getting this band of theirs on their way.  Technically, we’re a decade in here now boys…as you know…like I had said…it’s time to get it all movin.’

Here’s what I can tell ya after having listened to these two remastered tunes they’ve got here – if you told me they took about five years to write & perfect them…I might actually be inclined to believe it.  If there’s one thing you can conclude after even just a couple of spins, it’s that’s Astrixion puts a savage amount of work into their material and effort into what they do.  The reality of the music-scene, even today folks, is that quality generally takes time – and Astrixion proves they’ve been well worth waiting for.  Incidentally, I’ve got notes here in their bio that mention an EP coming out in late 2020 – I’m not gonna jump on their backs for that date being missed…we all know exactly what this last year has been like – but this IS the year right Astrixion?  We’re all ready to start smashing the charts for real now – yes?

Look at it this way folks – they’ve got a decade’s worth of experience under their belts now – Ron (Vocals, Guitar), Joseph (Guitar), and Kurt (Bass) aren’t gonna just bust outta the gate strong when their new record comes out, they’re gonna burn the whole mother down to the ground in the process, and leave a trail of scorched earth in their wake!  And that’s just the thing y’all…we tend to get caught up in the process of putting out music at a rapid pace in the modern-day era – but if you were to take a page from the blueprint of those that have walked this path before we ever took our own first steps, they’d be the first to tell ya that, those singles & EPs you all release out there…those are the building blocks.  You take those cuts…you play the living daylights outta them…you find new angles into them…new ways to innovate the idea…ways to make them better, more refined…more bulletproof than those original recordings could ever allow them to be without time & experience – and those cuts that stick around in the set-list, continue to generate your own interest & fans as well…those are the ones you get back into the studio with, and deliver something ten-times as strong.  I don’t need to explain this to Astrixion – clearly they get it, and as far as I can tell from what I’ve read, that’s exactly what they’ve been up to.  If there’s anything you can conclude from the sound of both “Six Gun” & “My Resolve” in their remastered forms, it’s that it’s more than fair to say you can expect enormous things from this band coming up here.

T’aint music for your grandma…that much is pretty safe to say.  If it IS music for your grandma, please pass her along my phone number, because clearly we should be hanging out.  I LOVE the professionalism in this band – hearing them storm through the incredible versatility & demands of “Six Gun” basically confirmed everything I needed to know right off the drop – this three piece has the skills & sound required to make an impact on ya, if not an outright permanent scar with their sonic savagery.  Major assets in this band to be found all-around that you can hear without question, individually yes – but it’s the way they play on such a unified front that might even be the most impressive aspect of Astrixion overall if I’m being real with ya.  “Six Gun” will give ya thunderously meaty bass-lines…it’ll have no problem raging with amped-up guitars and furious drum beats…and they’ll show ya they’ve got the ability to rock punishingly hard with a diverse range of sound from the music to the microphone on this one cut alone.  ALL of these aspects are great – but LISTEN to how tight these guys are will ya?  There’s not a hair out of place here – which is impressive in any song to begin with – but believe me when I tell ya, most music you probably listen to has about 1/100th of the demands being made of Astrixion throughout “Six Gun” – these dudes don’t just settle for some verse/chorus/verse, you feel me?  The sound is impressive without question…but if you’re a real music fan, chances are it’s gonna be the structure itself and the flawless execution that will damn near leave you speechless.  Armed with a huge chip on the shoulder of their aggressive sound, loaded up with post-Hardcore Alt-Metal vibes – it’s almost just as fair to say that Astrixion approaches their music with Progressive tendencies presented in a totally different way than you’ll find in most.  Essentially, anyone out there rocking with some kind of similar vibe to what you hear in Astrixion would quite likely be putting in half the effort – it’s songs as intricately assembled and expertly played as “Six Gun” are that prove this band has everything it takes.  They’ve held absolutely nothing back when it came time to get this track recorded – you can hear it in the way they exploded through the dynamics of this single as they play it, and it’s abundantly clear in the wild range of Ron’s vocals – this dude can go from the bold serenity of the purest melody, and all of a sudden light it up with intensity and throat-ripping vocals without a moment’s notice – consider yourselves warned to buckle the fuck right up, because Astrixion WILL take you for a serious ride into the heart of ambitious sound with such resounding confidence & precision, it should kick your ass in.

Maybe just as crucially when it comes to this particular review, is the fact that “My Resolve” and “Six Gun” sound like they can exist together now, despite being written way back whenever – they’re not only still completely fresh ideas and extremely engaging cuts to listen to, but mix-wise, they both sound right in-line with each other and ready to roll out onto that next record…which appears to be called Prescription Over Progress if their artwork is providing us a glimpse of that, which I’d assume it is.  Really powerful stuff overall though – I’d honestly have a tough time choosing between “My Resolve” and “Six Gun” if I was pressed to…ultimately, they both reveal the enormity of this band & the unity in the way they play.  Even if they’re telling us all to go fuck ourselves before it’s all over on “My Resolve” – which they may be, they might not be – I suppose it depends on who you are and what side of the fence you fall on when it comes to who they’re really singing about through the lyrics on “My Resolve” – but even if you feel like they’ve set their target & aim upon you directly, it’d still be tough to shake loving the wild degree of supreme pull they generate with the untamed energy in their music and relentless precision.  These songs prove this band has the drive & passion it takes to succeed – I mean hell, they’ve already proven that with the fact they’ve been around for a decade already – but the way they storm & stomp their way through “My Resolve” and “Six Gun” confirm what you should already know – Astrixion is ready for that next-level, whatever it may be, and whenever it may come.  Listen to “My Resolve” for example…you’ll find they’ve crushed it from the start to finish, just like they had done on “Six Gun” as well – but listen to how the first three & a half-minutes essentially give your ears everything they need & everything they wanna hear – and THEN, Astrixion finds a way to add in that much more diversity and create even more uniqueness by adding in that extra dimension to “My Resolve” before it’s all said & done.  But that’s what I’ve been tellin’ ya…they write with Progressive tendencies – the remarkable part is that you don’t feel the wear, tear, and drag of what that can all-too-often create within music – there’s such a continuous display of movement, dynamics, and energy, that even though they write immensely demanding material, it ends up being delivered in a cleverly accessible way.  Astrixion is stocked & loaded with all-out gripping music, supremely powerful vocals, and an unbreakable unity shared between them that not only leads them to spectacular results here, but will in the future as well.

Find out more about Astrixion from their official pages below!